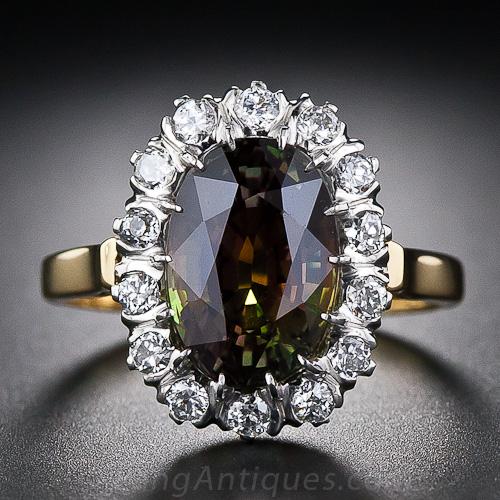 The finest Russian material is neither the red of a ruby nor the green of an emerald but a distinctive raspberry red and teal green color is obvious.

Because of the rarity of old Russian material you are more likely to see fine Brazilian material today. Brazilian alexandrite exhibits a color change from a lively bluish-green to a bright purplish red. Alexandrite is mined in Russia, Brazil, Burma, Sri Lanka, Madagascar, Tanzania and Rhodesia.

A Brief History of Alexandrite

Alexandrite is the birthstone for June and the Anniversary Gem for the 45th and 55th year of marriage! Because of alexandrite's rarity, genuine stones are often substituted with a variety of synthetic sapphire that exhibits a slight color change from blue to purple.
Alexandrite represents the astrological Sign Scorpio.

The Metaphysical aspects of Alexandrite

Alexandrite is often associated with luck and prosperity. It is attributed with the ability to aid in problems with the nervous system, spleen, pancreas & testicles. Alexandrite has been attributed with several mystical properties, including reinforcing one's self esteem and balancing positive and negative energy.