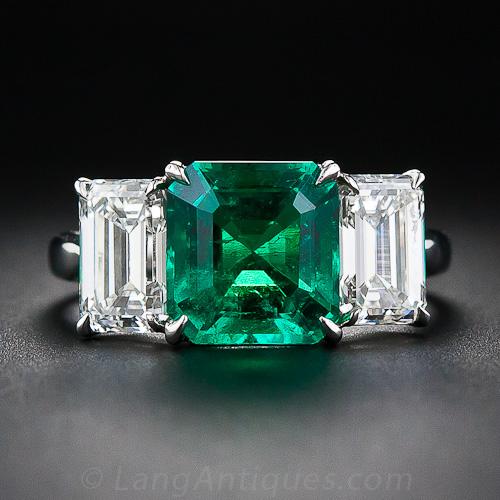 Emerald is the green variety of the mineral beryl, owing its vibrant color to a trace amount of chromium and occasionally a slight trace of vanadium. The majority of emeralds contain several inclusions of softer minerals. These inclusions have been termed "jardins", meaning gardens in French. Occasionally, these inclusions make it difficult to set the emeralds without damaging the gem. Emeralds have been cherished since man first discovered them and they are one of the most valuable of all gems. At times, emeralds have been more desirable than diamonds, rubies or sapphires.

A Brief History of Emerald

Pliny, the Roman Scholar, was one of the first to write about emeralds, praising its vibrant green color as representing the coming of a beautiful and hopeful spring. Pliny described a sculpted marble lion, in the tomb of King Hermias on Cyprus, overlooking the sea. The lion's eyes were fashioned out of natural emeralds that were so bright they scared away all the fish. The fisherman replaced the eyes with common stones and the fish returned.

The Holy Grail is reputedly carved from a large emerald crystal that fell from Satan’s crown as he descended from Heaven to Hell! The emerald's sacredness lead to a biblical writer describing the throne of God as surrounded by a rainbow that looked like an emerald. (Revelation 4:3)

The Metaphysical aspects of Emerald