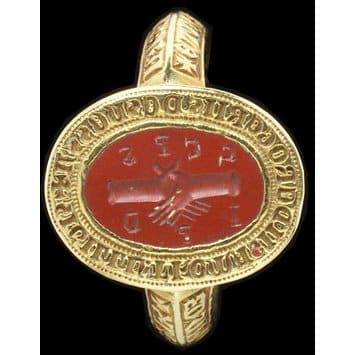 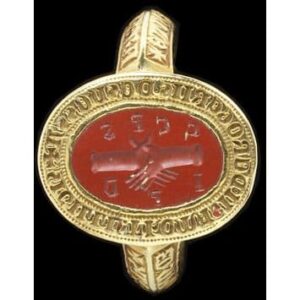 © Victoria & Albert Museum “Thirteenth century ring with a re-used Roman intaglio of the third century AD. The design of two clasped hands was known as in Latin ‘dextrarum iunctio’ or ‘joined right hands’ but nineteenth century collectors called these rings ‘fede rings’, from the Italian ‘mani in fede’ or ‘hands clasped in trust’. In Roman times, it was a sign of alliance or union and in medieval rings, the symbol is often associated with romantic inscriptions and found on love or marriage rings. Ancient carved gemstones were often re-used in the middle ages to show the erudition of the ring’s owner. Roman stones might have been found in the ground as casual finds or preserved and traded through the Eastern Mediterranean and Italian cities.”