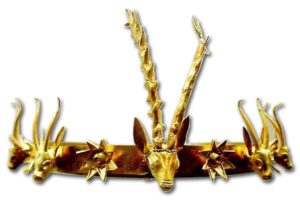 “Circlet or Diadem of an unknown Egyptian queen or a princess, electrum. H. (of stag’s head) 8.5 cm. From Salhiya in the Eastern Delta. (near Avaris) Now in the Metropolitan Museum of Art, New York, Registration No.68.136.1.” “This unique crown, consisting of a band of electrum 1.5 cm wide perforated to take tie-strings at the rear and mounted with rosettes and animals heads, appears to have been made in Egypt largely under Asiatic inspiration, if it is not an Asiatic import. In the 18th Dynasty, it became the fashion to decorate the diadems of princesses and lesser queens with the figure of a gazelle’s head in place of the uraeus or vulture of principal queens. This crown with its four gazelle heads may have been part of the trousseau of a foreign princess sent as a bride for one of the Ancient Egyptian Pharaohs according to the international diplomacy of the age.” (Cyril Aldred. Jewels of the Pharaohs. ed. Thames & Hudson Ltd. London: 1978