An interesting subset of the Art Nouveau jewelry movement was the design and production of medal jewels. Scrambling to recoup the losses incurred when cameos and intaglios became passé, jewelers began to imitate ancient Greek and Roman medals and coins. Circa 1880, ancient coins and pseudo-ancient coins set in jewelry were the first steps toward the creation of the exquisitely detailed medal jewels. French medal engravers, employed by the Paris Mint, were soon in high demand for their engraving and carving skills. The evolution from replica ancient coins and medals to sumptuous Art Nouveau medals, pendants and charms happened quickly. The focus was on creating affordable “modern” jewelry for the masses and France was the center for the design and production of medal jewels. French exports were the impetus for a movement to create medal jewels throughout Europe and the United States. 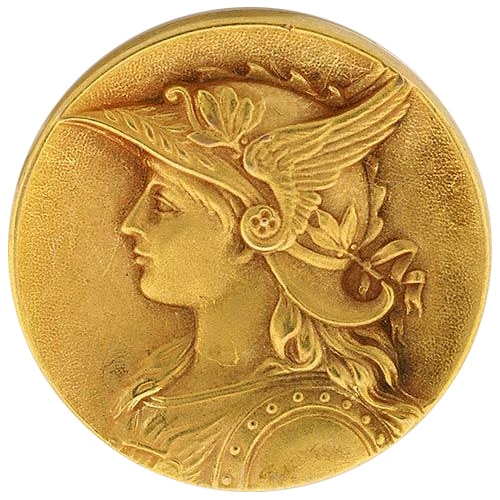 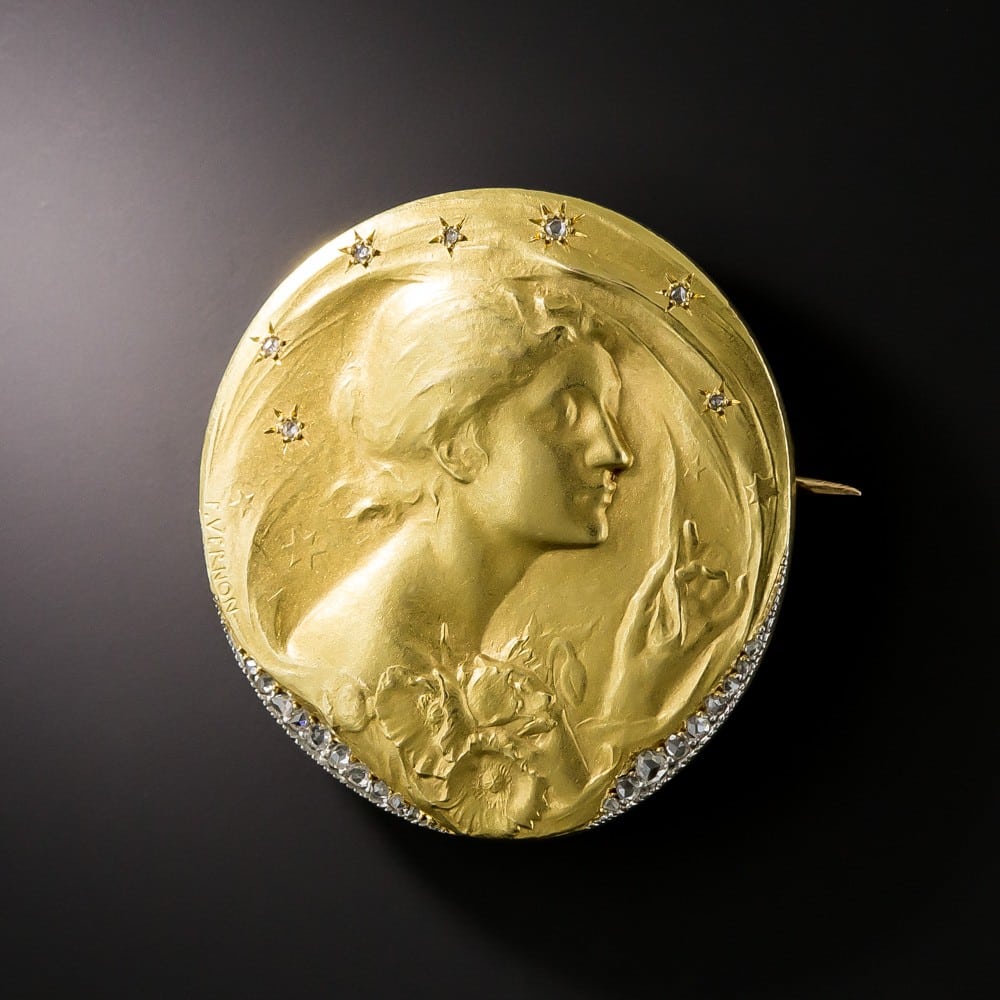 The invention of an indispensable tool for the purpose of creating medal jewels was key to the success of the style. Designing and hand engraving the miniature marvels required a very special skill set and often several craftsmen were involved in the production of a single medal. A lathe designed in Russia to reduce designs and etch medals and coins was known to have been used at the Moscow Mint c.1700s. Based on the Moscow model, a succession of reducing machines with different mechanisms were developed by the French, culminating in a much-improved machine c.1899. This new improved French model was put into use at the French mint. Lalique, among others, experimented with this reducing lathe, tour à réduire, and soon even those without specialized training were able to create fabulous medal jewels with all the detail of a hand engraved piece. 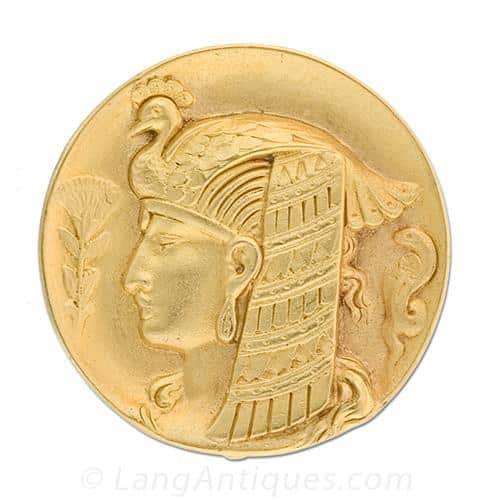 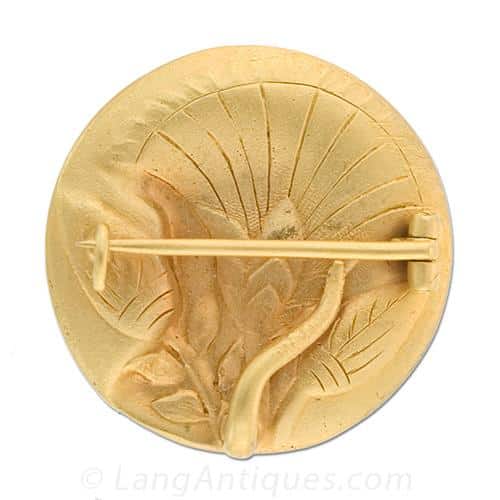 Master medal engravers and those adept at the use of the tour à réduire were in high demand and received important commissions from the top jewelers. The Jewelry firm of Maison G. Desbazeille very successfully marketed medal jewels, which they often enhanced with elaborate patinas and enamels. On the leading edge of the popularity of medal jewels, Desbazeille commissioned Vernier to create ‘Cleopatra’, ‘The Four Seasons’, ‘Women with Flowers’ and ‘Saint George’ medals to name a few. The firm also kept Roty, an expert in the use of the tour à réduire, occupied with the design for both religious and irreligious medals. Roty’s skill made him popular with many of the manufacturers who were interested in offering medal jewels in their line.

The partnership of Duval et Le Turcq, working together circa 1885 – 1889, began producing uncharacteristically heavy religious jewels, which became a sensation and soon they added floral and foliate motifs which they accented with matte enamel. After their firm split, they each went on to commission medals from the finest designers of the day. An incredibly unique thimble, commissioned by Duval and designed by Vernon, depicted seamstresses in great detail all around. It is believed that Paul Kruger, President of the Transvaal, presented the thimble to Queen Wilhelmina on the occasion of her wedding. 1

The artisans whose works could now be drawn upon for the creation of medal jewels came from many different mediums, including sculptors, poster artists, designers, and jewelers. This resulted in a unique blending of aesthetics and a nouveau perspective on design. The roots of the medal jewel are found in the archaeological revival period and, as design moved toward the fin d’ siècle, we begin to see the Art Nouveau influence in their design. Feminine figures, flowing hair, flowers and classic subjects such as the “Three Graces” and “Four Seasons” appeared as the more coin-like medals waned. “Habilles” style medals, appearing around 1899, with their diamond accents, proved to be a turning point for the popularity of the medal jewel.

Medal jewels were spotted in the inventory of nearly every jeweler of the day. The medallists became an overwhelming success and medal style brooches, stickpins, pendants, medallions, bracelets, and buttons produced in silver and gold, as well as base metals accented with gilt, were abundant. The coin-shaped form gave way to many more interesting outlines, sometimes pierced to accentuate dimension. Subjects deviated from the classical figures of the earlier years to include animals, flowers, insects, and religious figures. Many of these jewels remain extant despite the troublesome trend toward melting gold jewelry as the price of gold rises.