Renowned nineteenth-century French jeweller and goldsmith, Louis Aucoc (1850-1932) was a member of a family of already well-reknown goldsmiths. 1 In 1877, he bought the well-known Parisian firm, Lobjois, and changed its name to La Maison Aucoc. According to jewellery historian Henri Vever, Aucoc “quickly acquired one of the most prominent positions in the trade through his admirable personal qualities.”2Aucoc’s great skill as a goldsmith and refined aesthetic sensibility undoubtedly contributed to his success as well. Though not particularly innovative, his jewellery—carefully made with the finest of materials— kept directly in step with French fashion. The firm’s Art Nouveau pieces were particularly well regarded; they often feature exquisitely chased gold combined with enameling and finely set diamonds.3 Aucoc is also remembered for his leadership within the jewellery industry. According to Vever, he consistently served on the prize-giving and admissions panels at Paris’s International Exhibitions.4 Another one of Aucoc’s claims to fame is that he taught Art Nouveau revolutionary René Lalique how to work with gold. From 1876-78, Lalique served as an apprentice at La Maison Aucoc. 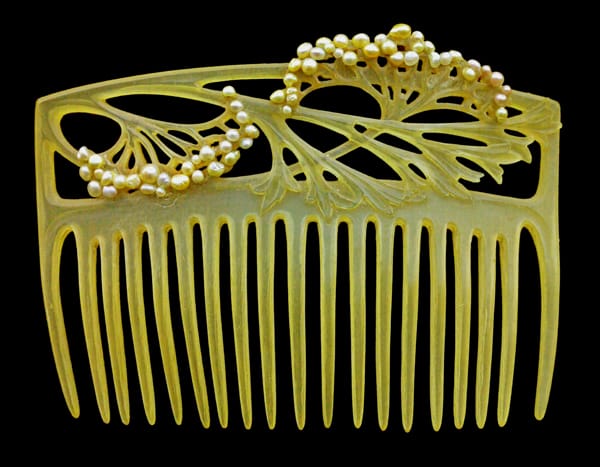