One could rightfully call this stone the Rodney Dangerfield of diamonds. Almost from the moment of its discovery, this diamond has gotten positively no respect from the jewelry world. Even after it was cut in an attempt to make it more marketable the newly sized version of this diamond was still greeted with a “ho-hum.” Its eventual owners were so enamored with this reduced but still large carat stone that they chose to lock it away from public view for decades! Only recently has the attitude toward this much-maligned stone softened.

The diamond is named for Banjarmasin, an island city in the Borneo region of what was to become Indonesia. During the period ranging from the 15th to 19th centuries, this area enjoyed a well-renowned reputation not only as a center for trading the extraordinary gems coming out of India but also for the ones found locally that are prized for their rare colors and exceptional brilliance. Colonized by the Dutch, the Government of the Netherlands maintained a presence in Borneo (Dutch East Indies) supporting a sultanate for centuries. During the 18th century alone the Dutch cultivated approximately 50,000 carats of diamonds from the region annually. 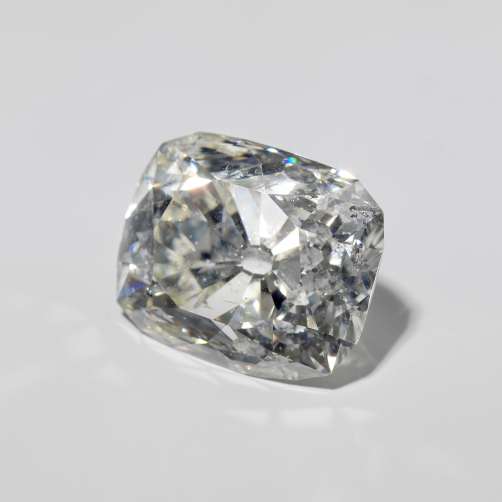 Banjarmasin Diamond.
Courtesy of the Rijksmuseum.

Our diamond’s story starts with an expedition to Banjarmasin by Dutch scientists in 1835. There they met the ruler of the island, Sultan Panenlaka Adam. Being the gracious host, Panenlaka Adam invites his learned guests to his palace where they are treated to a performance by some of the Sultan’s more talented subjects. However, what catches the Dutch scientists’ eye is not the native entertainment or the splendor of the palace – which was described by one of them as “ramshackle” – but rather it’s the Sultan himself, who is bedecked in fine silks and adorned with fabulous jewels. Furthermore, they discover the coffers of the Sultan are filled with such diamonds, precious gems and gold jewelry. Additional rumors have the Sultan’s first wife owning so many diamonds that she stores them in overflowing wine bottles. How the gems came to be in the possession of the Sultan remains a mystery. Considering the fact that the Sultan’s allowance from the Dutch was only 1,000 guilders per month it’s doubtful he purchased them on that salary – especially when he reportedly had difficulty just supporting his hedonistic lifestyle on such a paltry sum. What we do know is that the Dutch had their eyes on all that native-owned wealth and finally acted in 1859 to relieve them of it, dissolving the sultanate, confiscating the Sultan’s treasure, and – by 1862 – shipping the entire inventory to the homeland.

With their ill-gotten treasure now securely stored in the Netherlands, the Dutch government went about the task of inventorying the Sultan’s former jewels. Among the spoils, they found a rough diamond weighing 70 carats. Immediately named the Banjarmasin, it was decided to send the impressively sized diamond to the Museum of Natural History for display. Yet, for some inexplicable reason, the museum’s board of directors rejects the specimen! After recovering from the rebuke, the Minister for the Colonies attempts to sell the diamond. To his amazement, he finds that no one wants to purchase it! Believing it’s the stone’s size that is scaring off suitors, the diamond is submitted to the firm of E. and J. Vital Israels for cutting. The result produces a squarish-shaped 40 carat white diamond. To the Minister’s chagrin, the reduced sized diamond still does not attract a buyer.

To make matters worse, the Dutch government’s plan to display the now altered diamond at the Rijksmuseum as an historical item is abandoned because authorities there decide the “new” sized stone no longer has any historical significance. The fact that other countries in Europe proudly displayed their historical gems, regardless of re-cutting, as valued items of national history seems to be lost on the Dutch. The stone is again turned over to E. and J. Vital Israels, this time with instructions to sell it. When E. and J. Vital Israels’ attempts fail the Dutch government again takes control of the gem in 1902.

Meanwhile, in another part of the Dutch East Indies, history is busy repeating itself. This time the victim is the Rajah of Lombok who – like the hapless Sultan Panenlaka Adam – loses his kingdom to the Dutch with his treasure being confiscated and brought to the Netherlands. Commissioned by the Dutch government, E. and J. Vital Israels appraises the Lombok jewels after which some of the stones are sold while the finer pieces go to the Rijksmuseum for exhibition. It’s during this display of the Lombok jewels at the Rijksmuseum that the Banjarmasin diamond finally makes its long overdue appearance. Added to the exhibit, the Banjarmasin – along with the Lombok jewels – is viewed by 23,000 people. Scheduled to last only two months, the large turnout forces the museum to extend the exhibit for an additional month. Still, the event seems to have no further impact on the diamond as after its conclusion the authorities take no interest in the items from the exhibit, failing to create any kind of itemized inventory.

When the Republic of Indonesia is established following World War II, the Dutch government negotiates the return of some 250 pieces of the confiscated jewelry to that country. Ironically, the disrespected Banjarmasin is not among them, remaining the property of the Dutch government only to be stored away for many years in a vault unviewed by anyone. It is not until 2001 that the Banjarmasin finally reappears, this time at the exhibition “Diamants” at the Muséum National d’Historie Naturelle in Paris. Since that time it has been publicly displayed at the Rijksmuseum in Amsterdam.