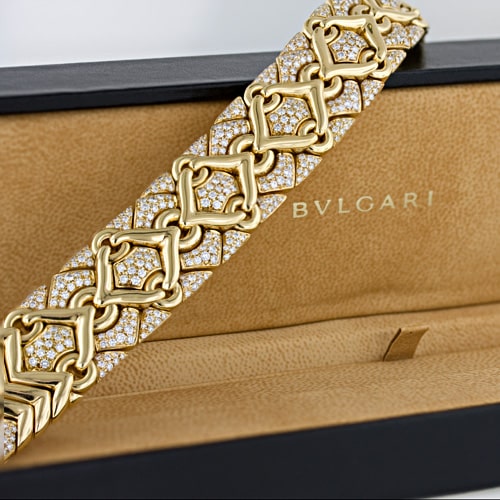 Based in Rome, the jewelry firm of Bulgari is best known for their bold designs from the 1960’s to 80’s. The firm’s history begins with the patriarch of the Bulgari family, Sotirios (1857-1932). After a series of political upheavals and traumatic robberies, Sotirios and his father moved in 1877 from Paramythia to the Greek island of Corfu where they set up a successful silver workshop, practicing an art passed through their family since Byzantine times.1

In 1880, Sotirios left Greece, sailing to Italy with an ambitious friend, Demetrios Kremos. Initially, the two opened a store in Naples. After robbers cleaned out their inventory in 1881, they moved to Rome -Sotirios reputedly had all of eighty cents of lira left in his pocket. He and Kremos began by selling their wares through other vendors, but they soon had enough money to open their own shop. In 1884, Bulgari ended the partnership and opened his own store at 85 Via Sistina in Rome. There he sold silver objects, antiques, and archaeological-revival jewellery, which was still popular in Rome at the time. In 1894, the store moved to larger premises. In 1905, it moved yet again. Seasonal stores were opened outside of Rome in locations such as St. Moritz and Lucerne.2

During the early years of the twentieth century, Sotirios’s sons, Giorgio and Constantino, changed Bulgari’s stylistic direction. From the 1920’s until the 1960’s, utmost care was taken to produce jewellery in line with current French fashions. Styles meandered from Edwardian to Deco to Retro to Modern. Archaeological jewellery was no longer produced. Giorgio managed the business and kept a watchful eye over its designs. Constantino studied ancient silversmithing techniques, researching and writing about the history of silver production in Italy.

As the third generation of Bulgari children entered the business (Giorgio’s sons, Paolo and Nicola, and Constantino’s daughters, Anna and Marina), the firm’s ambitions changed yet again. No longer following French styles, Bulgari instead aimed to create its own. In 1976, when Marina left, the family hired former Tiffany & Co. designer Donald Claflin to aid in this enterprise. By the 1980’s, success was theirs. “I think your jewellery is the 1980’s,” Andy Warhol said in an interview with Nicola Bulgari, “Everybody’s trying to copy this look.”3 Volume and color were the new bywords. The firm produced massive colored-stone parures inspired by Indian, Iranian, and Egyptian sources. Featuring bubbly, large cabochon-cut gemstones, the pieces flaunted bright and adventurous color combinations. Bulgari’s modular jewels were also bold and bright. The basic idea was to use striking, geometric shapes to form a distinct, repetitive pattern. The first in the series, Parenthesi, featured stylized parenthesis and is reputedly the most copied of Bulgari’sdesigns. During this era, Bulgari also became famous for its coin jewellery. These pieces referenced the firm’s nineteenth-century beginnings, when it was creating almost exclusively archaeological jewellery, and also its Italian and Greek heritage. Large, interesting, and often very old coins were set in bezels and attached to a filed, curb-link chain. Coin jewelry is now among the firm’s trademarks. 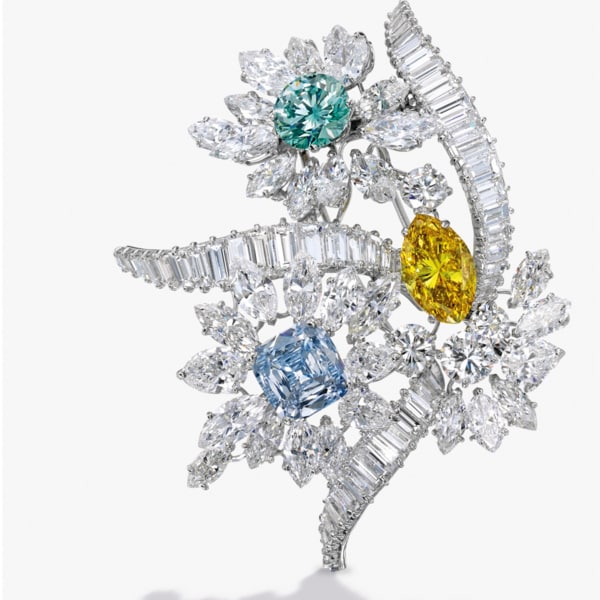 As the fourth generation of Bulgari children has been brought into the fold, Bulgari’s success has continued. In the early 1990’s, the firm introduced the Chandra collection to great acclaim. Chandra pieces feature molded, white porcelain beads combined with gold and precious stones. During the 1990’s, the firm also expanded its selection to watches. With locations all over the globe, its jewellery remains distinctive and fashionable, flaunted by royalty and stars of the first order. 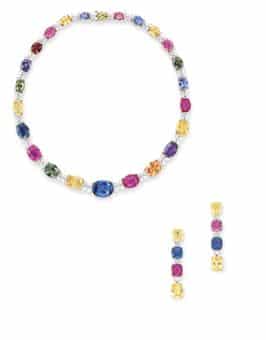