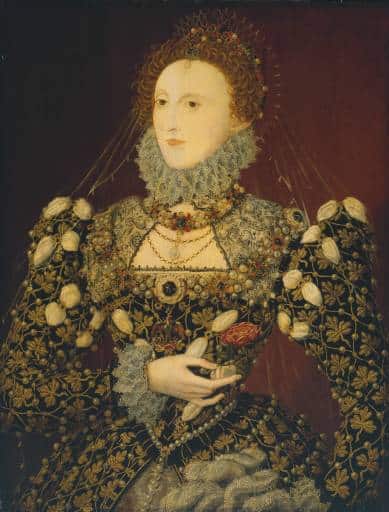 Carcanet or carcan is a jeweled collar or necklace, from the old French, carcan, meaning collar. Carcanets were typically quite elaborate and formal, worn closely fitted to the neck. The style seems to have first appeared with the reemergence of the necklace during the end of the medieval period in the late 1300s. As noted in The Necklace by Daniela Mascetti and Amanda Triossi:

The new necklaces were conceived usually as broad collars to be worn at the base of the neck or close around the neck, as suggested by the term carcan, found in French records of the 1380s and 1390s, which also referred to the iron collars fastened around the necks of prisoners.1

Carcanets reached their height of popularity during the Elizabethan era before falling out of favor when simpler and more minimalist clothing and jewelry became the fashion by the end of the sixteenth century.