Gabrielle Bonheur ‘Coco’ Chanel’s inauspicious beginnings did not portend the impact she would have on the world of fashion. Her start in life was modest and at a young age, things took a turn for the worse when, upon her mother’s death, she and her sisters were sent the spend the remainder of their childhood in a convent orphanage. Learning to sew in the orphanage was probably the best thing to happen to young Coco. Her skills as a seamstress enabled her to earn a living while attempting to make her way as an actress. Designing hats at first then later branching out to clothing design, Coco turned what could have been time wasted in the rural pastimes of her lover into a notable career.

Fashion was changing rapidly and Coco adapted her designs to reflect the new silhouette emerging from the Belle Époque. Using jersey, a fabric heretofore reserved for creating undergarments, she created a T-shirt style top called a marinierés, a revolution in women’s fashion. According to the New York Times:

She induced members of her own sex to shorten their skirts, to bob their hair, to apply the jersey wool of their undergarments to afternoon dresses and to deck their persons with clusters of unabashedly fake jewelry.1

By the conclusion of the First World War, she had established herself and took the world of couture by storm. The unexpected death of her patron and lover, Arthur Capel, threw Coco into a work frenzy. 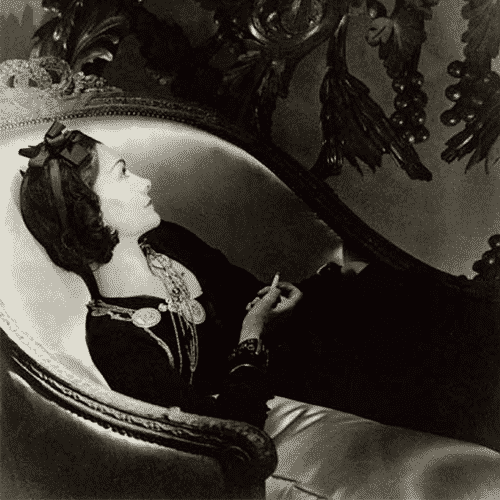 Chanel dominated the Paris fashion world in the nineteen-twenties and at the height of her career was running four business enterprises – a fashion house, a textile business, perfume laboratories and a workshop for costume jewelry – that altogether employed 3,500 workers.2

Creating special jewelry to accompany her couture creations, Coco used a hands-on approach to design her jewels. The technique involved arranging stones like puzzle pieces and building clay models to support them forming bigger than life decorations for her sleek and tailored fashions. Inspiration for her jewelry came primarily from antiquity, the Egyptian age, Byzantine, Medieval, and Renaissance eras with bright colored gemstones and paste and intricate chains and findings. While her clothing designs were remarkable, the hoi poloi were not ready for her inventive mix of faux and natural jewels. At that time cabochon gemstones and “lesser” colored stones were not viewed as “real” jewelry but they were perfect for her over the top ideas. These fashion-forward big jewels established her. 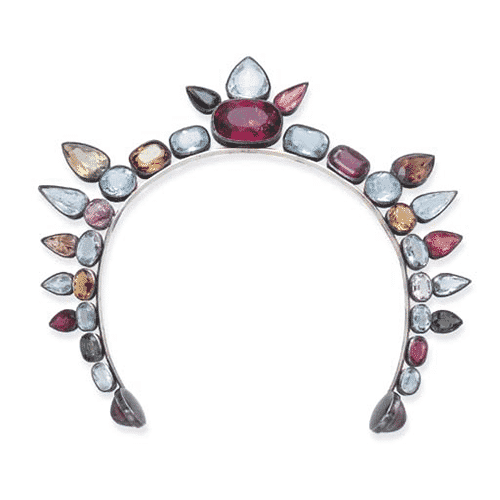 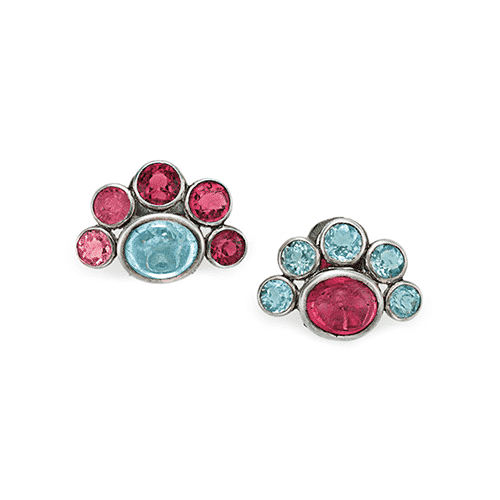 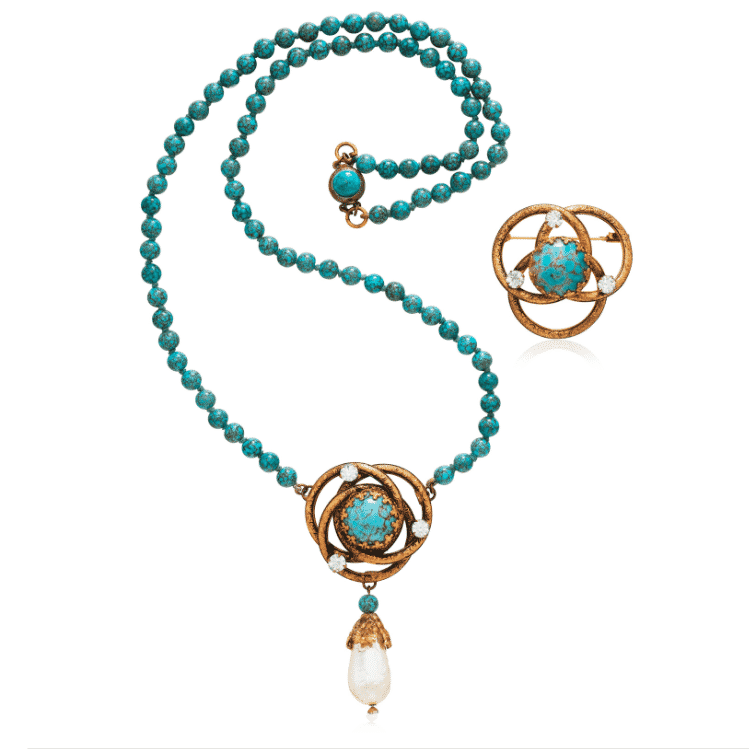 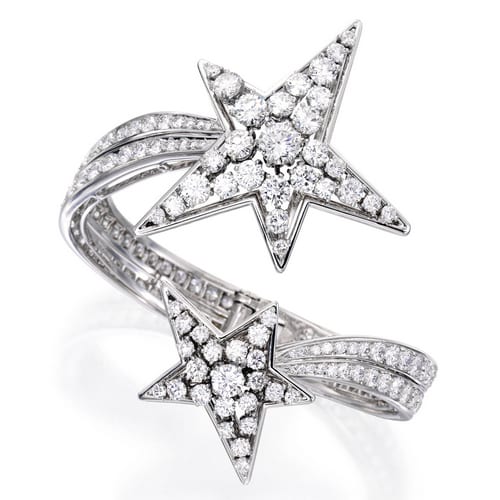 If I have chosen diamonds, it is because they represent the greatest value in the smallest volume. And my love of things that glitter has inspired me to try to combine elegance and fashion through the medium of jewelry.3

The result was to shift diamond jewelry from the purview of the wealthy and make them a fashion item. Each jewel was designed to be convertible having more than one purpose and was composed with invisible clasps and settings. The featured motifs were comprised of variations on bows, stars, and feathers. Equally as unexpected as the actual jewelry designs were the mannequins employed to display this unusual collection. None of this was lost on the conventional jewelers of the time and the choice of a “dressmaker” over the jewelers of Place Vendome angered the established jewelry houses. They attempted to block the sale of these creations and have them all dismantled, only a few pieces are known to have escaped their wrath.

Chanel moved within a circle of some of the most interesting figures of her time. Paul Iribe, Etienne de Beaumont, Jean Cocteau, Pablo Picasso, and Fulco Verdura to name a few. While they all influenced her jewelry designs on some level, Verdura’s designs for Chanel encompassed an intimate knowledge of art history and demonstrated a strong sense of classical design. The wide enamel and gem set Maltese cross motif bracelet is probably the most memorable design to arise from their collaboration. Their association ended in 1934 when Verdura moved to New York, eventually designing for Paul Flato and, in 1937, opening Flato’s Los Angeles location. The people who had an impact on Chanel’s designs came and went but one constant in her jewelry line was the use of the Gripoix workshop in Paris to manufacture her costume jewelry.

The declaration of war between France and Germany at the start of World War II resulted in the closing of all but one of her boutiques – Paris. Choosing to live out her days in Switzerland, Coco went into temporary retirement, reemerging in the 1950s to create her antidote to the “new look.” In 1971 at the age of 87, she died “with her boots on” creating and designing until the very end.