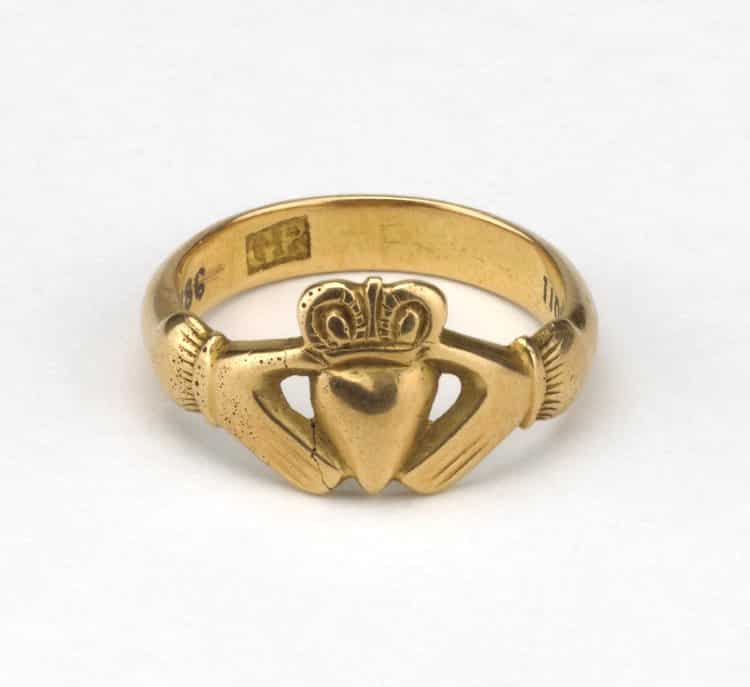 Gold Claddagh Ring c.1784.
© The Trustees of the British Museum.

Named after a small fishing village in Galway, Ireland, the Claddagh ring features a central heart surmounted by a coronet, grasped on either side by hands. This ring pledges love but takes that a bit further with additional vows of fealty, loyalty, trust, and faith. Its simple but unique motto, “Let love and friendship reign.”

The design is derivative of the Medieval fede rings popular in the Mediterranean region. Always composed of two clasped hands, the design sometimes included a heart. A clever Galway goldsmith named Richard Joyce c.1690s is credited with having added the coronet or crown. It is theorized that the crown was a symbolic thank you or sign of gratitude from Joyce for being freed from slavery by William III. The coronet’s symbolism is interpreted by some to be a symbol of rank but, more commonly it’s believed to symbolize the sovereignty of love over the heart.

Irish tradition holds that the ring can be given in friendship or as a token of love. If worn on the right-hand ring finger with the heart pointing to the fingertip, the wearer is “available,” turned the other way the wearer is “involved.” Worn on the left-hand ring finger the Claddagh signifies engagement or marriage. Popular during Georgian times they remain so today, equally beloved around the world by the bourgeoisie and hoi polloi alike.