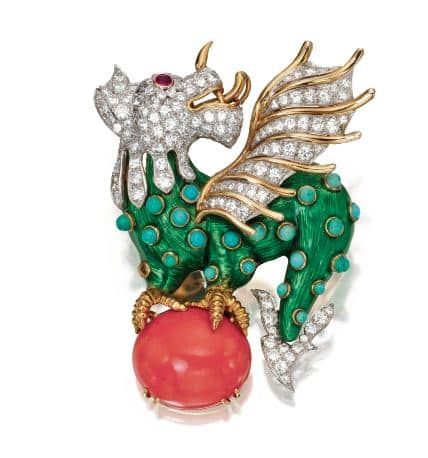 This is a world where color and movement reign, where everything we do or wear expresses the individual, not someone else’s idea of fashion.1 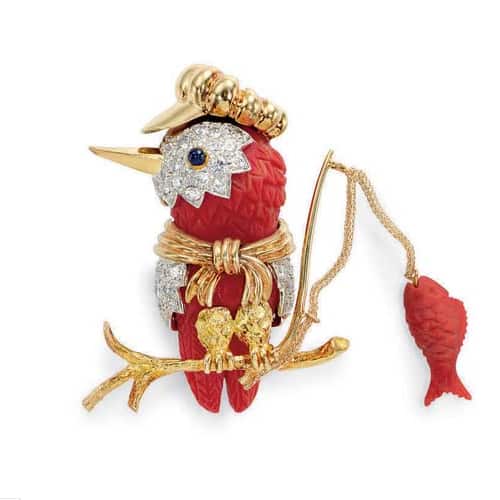 Donald Claflin (1935-1979) was a noted American jewelry designer most associated with the colorful and whimsical designs he created for Tiffany & Co. during the sixties and seventies. Born into a well-established Massachusetts family, Claflin attended the Parsons School of Design in New York and found work as an illustrator and textile designer, establishing a reputation as a youthful and innovative talent. His start in jewelry came when he joined the firm of David Webb, known for their buoyantly enameled figurative jewels that were a fresh contrast to the formality of the Fifties. In 1965 Claflin was hired by Tiffany & Co. to continue in the innovative and individualistic design approach that designer Jean Schlumberger had so successfully established at the firm. 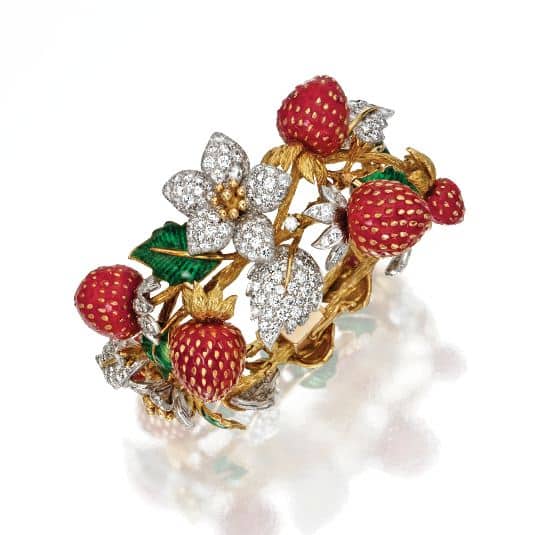 Claflin’s designs were rooted in eclectic pairings of materials and color. As noted in American Jewelry:Glamour and Tradition:

Claflin was responsible for many original combinations in jewelry:one of his bracelets incorporated woven Moroccan leather, gold, and stones; he also brought ivory and exotic hardwoods back into fashion.2

Claflin typically worked in highly polished 18 karat yellow gold and the colorful combinations of gemstones he preferred were noted for their high quality, a benefit of having Tiffany’s impressive inventory of gems at his disposal. Coral and diamond were a favored combination. Many of the playful creatures he created were based on creatures from Stuart Little, Alice and Wonderland, Humpty Dumpty and other classic children’s fairy tales. Other series of jewels were based on such disparate sources such as a set of ancient Peruvian figures and a fanciful troop of Asian acrobatics. These figures are all notable for their richly colored enamels and detailed workmanship, a hallmark of the manufacturing firm of Carvin French who produced the pieces for Claflin.

In addition to his more exotic pieces, Claflin also produced many more classically designed pieces for Tiffany. In 1969 he designed their first collection centered around their newly discovered gem Tanzanite and in 1976 offered a new interpretation of the classic Tiffany diamond engagement ring in which the diamond center stone was set in the cross of two intersecting bands of metal.

After eleven years at Tiffany, Claflin joined the New York branch of the Italian jewelry firm of Bulgari in 1976. Bringing along the talents of Carvin French, Claflin’s pieces during his three years at Bulgari were designed to highlight the firm’s appeal to the contemporary tastes of American women and the trend for jewels that could be worn through the day into the evening. Daniela Mascetti writes:

…Claflin created jewels for Bulgari that were formed by clean shapes and smooth contours which embodied the firm’s criteria of design. He is best remembered for his successful loop earrings, formed by a continuous line of baguette diamonds, and for his crossover rings.3 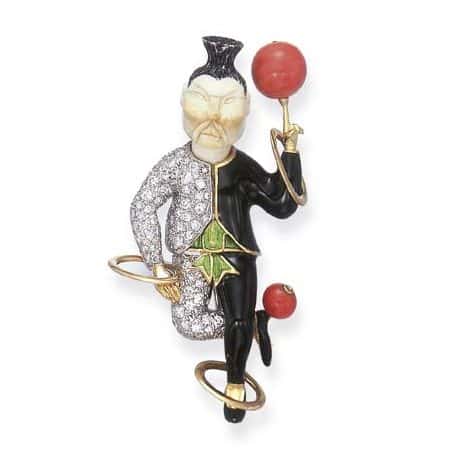