Cut-steel jewelry is jewelry “set” with tiny faceted and polished steel studs, fashioned to resemble gemstones and usually riveted in place. All manner of jewelry was produced from cut-steel: earrings, necklaces, brooches, bracelets, chatelaines, shoe buckles, indeed, even entire parures. In addition, cut-steel frames were popular settings for cameos. Cut-steel’s unique attribute lies in the fact that it was the only fine jewelry imitation in which both gemstone substitutes and their settings were made of the same material; most other faux jewels were composed separately of faux gems and metal settings. One such faux material is marcasite, an extremely popular diamond substitute with a metallic luster. Cut-steel has a distinct similarity to marcasite, in fact, examining the reverse of a piece is sometimes necessary to distinguish between the two. This resemblance could help account for cut steel’s long standing appeal. 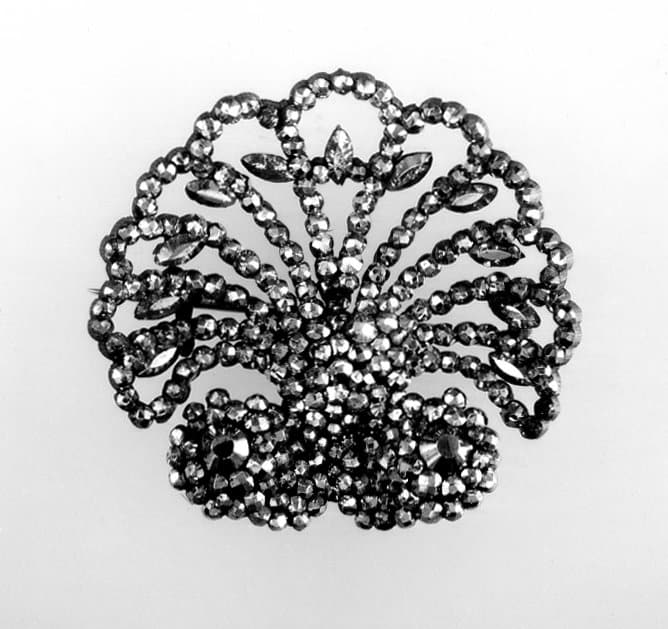 Scallop Shaped Cut-Steel Brooch.
© The Trustees of the British Museum. 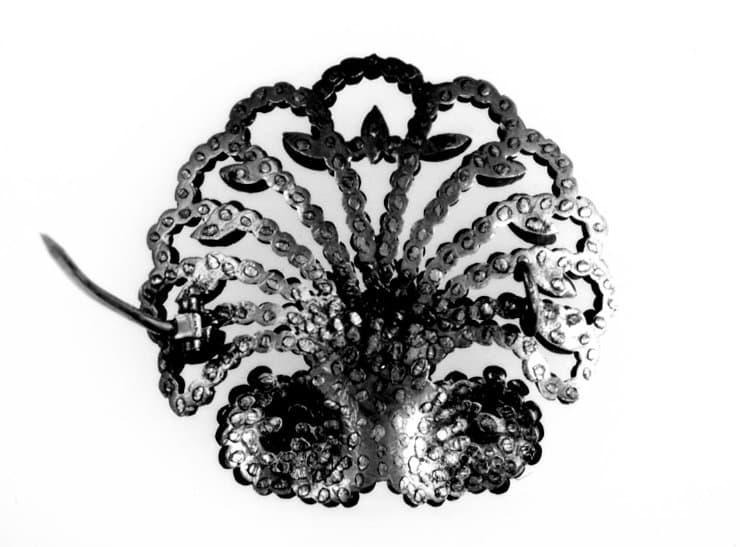 Scallop Shaped Cut-Steel Brooch: Reverse. Note the Pattern of Rivets Securing the Studs.
© The Trustees of the British Museum. 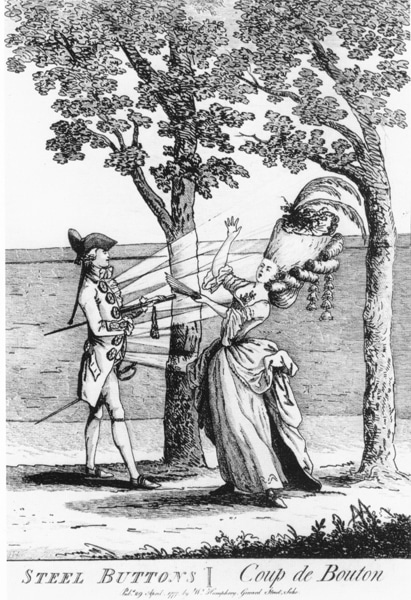 Cut-steel jewelry was produced as far back as the Elizabethan period in England, but developed into a serious concern in the 1700s as demand for the product grew. Becoming fashionable in France circa 1759, cut-steel jewelry was worn as a substitute for donated (or hidden) jewelry when French King Louis XV ‘requested’ that citizens donate their precious gems and jewelry to help fund his military campaigns during the ‘Seven Years War’. The French spurred the English manufacturers in Woodstock and Birmingham with their overwhelming demand for the product.

Not an easy product to manufacture, the studs had to be faceted, polished and riveted in place. Early studs were often produced with as many as fifteen facets making them particularly bright and sparkling. The technique used to create the facets is called chip carving, an ancient technique which traditionally was used on bone and wood. The studs were small and very densely compacted in pavé designs onto a supporting base plate. Sometimes a secondary supportive base plate was added making the finished piece quite weighty. Early pieces consisted of mainly functional items such as buckles and decorative motifs for swords. Eventually, this expanded to include every type of jewelry.

Sumptuary laws in France and Switzerland regulated who could wear diamonds and precious metals. Cut-steel provided a stylish and popular new jewelry material that could be enjoyed by everyone at all levels of society. This expanded market resulted in exports from England to all of Europe and America. Matthew Boulton, a prominent industrialist, and cut-steel manufacturer, saw an opportunity to expand the business further to include the new demand for color in jewelry along with classical design themes and joined forces with Josiah Wedgwood to incorporate jasperware in his cut-steel pieces. This collaboration resulted in a beautiful and unique fashion jewelry. Wedgwood went on to expand his collaborations to other cut-steel producers as well as manufacturers of Berlin iron work. 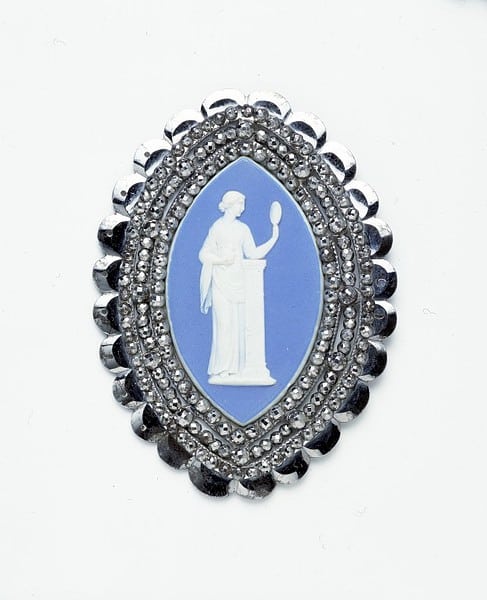 Eventually, the profitability of cut-steel and the great demand for it in France caused the French to create their own local cut-steel workshops. Originally the industry was run by a British entrepreneur named Sykes who started up a cut-steel jewelry business in Paris c.1780. By the eighteenth century, the cut-steel business was big enough to be embraced by French manufacturers and demand for it often made it more valuable than gold. The French Revolution curtailed the English trade with France and therefore the demand for cut-steel jewelry exports from Britain. After the revolution, the French workshops were handling the domestic demand without the need for imported British goods.

Cut-steel remained popular until the late nineteenth century. By this time the original fifteen facets per stud had been reduced to only five facets. Mass manufacturing began to produce whole ribbons of studs by stamping them out by machine instead of faceting them individually and riveting them in place. Quality began to deteriorate and demand began to fall. The Victorian pieces had nowhere near the quality or beauty of the earlier work. Unfortunately, as a result of steel’s high corrosion factor, not many pieces have survived.