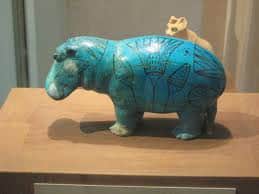 Egyptian blue was a synthetic pigment used in Egypt, starting around 3rd millennium BC, to imitate turquoise and lapis lazuli. Blue was an important color to the Egyptians and natural gemstones possessing a vivid blue color were very rare in the region. Staggering amounts of Egyptian blue were needed to make all the beads, seals, icons, decorative displays, and objects that were composed with the use of the color blue. As best as we can reconstruct, Egyptian blue was composed of quartz sand, copper, calcium carbonate and plant ash or natron. These were melted together resulting in the creation of synthetic cuprorivaite – Egyptian blue.