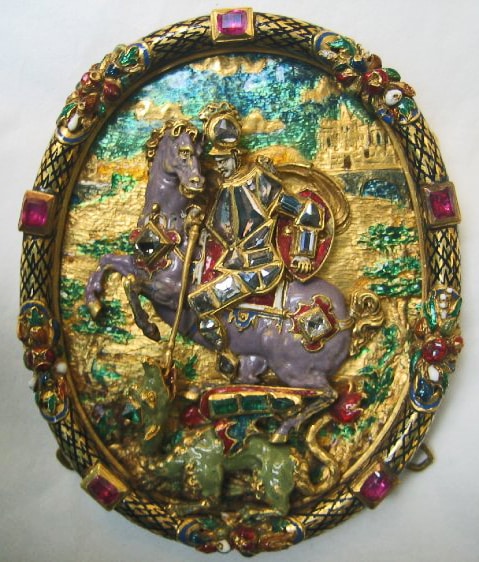 Enseigne Depicting St. George on Horseback Slaying the Dragon. Worked in Repoussé, Chasing and Enamel on Gold and Accented by Rubies, Diamonds and Emeralds.
c. 1551-1575.
© The Trustees of the British Museum.

An enseigne was a sixteenth century badge displayed on a hat. Badges that were symbolic and decorated by the wearer’s portrait, monogram, patron saint or other mythological or Biblical imagery were referred to as enseigne. Often they were elaborately enhanced with enamels, gemstones and cameos and set within floral filigree frames. Usually loops along the edge or holes pierced through the medallion were used for sewing the badge onto a cap. Women though, often wore these elaborate enseigne as pendants.

Charles VIII of France wore this type of ornament wrought in gold on his cap while his men wore similar badges in lesser metals. The fashion spread throughout the European courts and from there to noblemen and those who emulated them. The enseigne remained in vogue until the late sixteenth century when aigrettes replaced them in popularity.

In the book Tudor Costume and Fashion the author states:

Enseigne and medallions for headgear became even more ornate, and in nearly all instances bore some figured design. ‘It was the custom of that epoch to wear little golden medals, upon which every nobleman or man of quality had some device or fancy of his own engraved; and these were worn in the cap.’ This statement was made by Cellini in 1525. Backgrounds were formed of a variety of different styles of enamel, and semi-precious stones such as lapis lazuli, agate and sardonyx. Even more popular were cameos (like the precious stones just mentioned) were usually surrounded by jewel studded gold rims, and frequently by frames of wire and filigree in floral forms.1