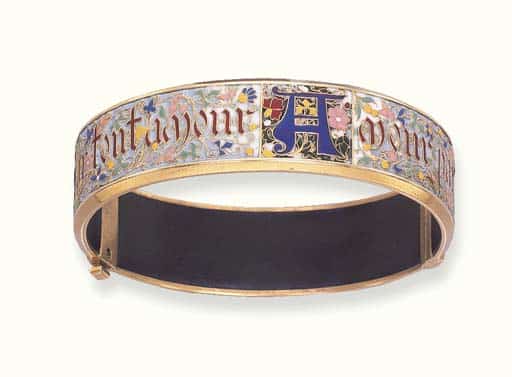 Renowned French jewellery house famous for its cloisonné enameling and Japanese-inspired designs. The firm’s history begins in 1832 when Alexis Falize (1811-1898) began an apprenticeship with Parisian jeweller Mellerio dit Meller.1 An eager pupil, Falize quickly learned all aspects of the trade: manufacturing, chasing, engraving, design, sales, and bookkeeping. Looking to improve his marriage prospects, he left Mellerio in 1835 for Janisset. In 1838, he left Janisset to open up his workshop. “Such were the beginnings,” wrote Henri Vever, “of this highly talented jeweler, whose work as a designer and manufacturer was so significant.”2 Vever credited Falize with revitalizing jewellery and the decorative arts during Napolean III’s reign (1852-1870). His specialty was “artistic” jewellery: jewellery featuring semi-precious gemstones, intricate metal work, and enamelling.

From 1860 to 1865, Falize experimented with enamels and studied with the most talented enamellists of the time. In 1871, he introduced a new method of cloisonné enameling. His work was widely copied and sparked a general interest in the use of brightly colored enamels. Inspiration for his designs was drawn from almost every historical era and many cultures, including those of Persia, India, and Japan.

When Falize retired in 1876, his son Lucien (1839-97) assumed control of the workshops. Having trained with his father for the previous two decades, Lucien was a competent successor—a highly skilled enamellist, goldsmith, and designer. His obsession with eras past (especially the Renaissance) and Japanese art matched, if not surpassed, that of his father. In 1878, Falize won a grand prize for his jewellery as well as a coveted Legion of Honor Cross at Paris’s International Exposition. In 1878, he joined forces with descendants of Bapst, the former French Crown Jewellers, to create jewellery for Paris’s wealthy aristocrats. Until 1892, Bapst et Falize enjoyed great prosperity. Around that time, Falize helped to theorize the burgeoning Art Nouveau movement, contributing articles to Samuel Bing’s monthly journal Le Japon artistique.3“Jewelers, led by Lucien Falize,” says Vivienne Becker, “seized on the simplicity of form, the intensity and clarity of colour of Japanese enamels, and the intriguing effect of mixed metal work…These were the very attributes of Art Nouveau jewels.”4 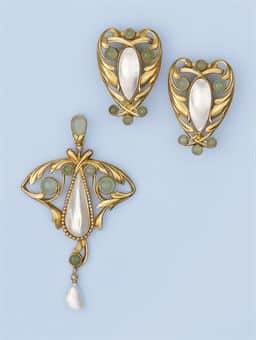