French jeweller known for its Renaissance Revival and Art Nouveau work. In 1839, the firm’s founder, Alphonse Fouquet, entered the jewellery industry at the age of eleven, serving as an apprentice to Parisian jeweller Henri Meusnier. His mistreatment under Meusnier is now infamous. Chronicled in Fouquet’s autobiography, parts of which were reprinted by Henri Vever’s French Jewelry of the Nineteenth Century, the apprenticeship included physical abuse, long work hours (14 to 20 hours a day), low pay, and nearly unbearable living conditions.1 Fouquet stayed for five years after which he trudged from one low-paying manufacturing job to another. In 1847, he got his big break, winning a position designing jewellery at M. Pinard’s firm—a result of the promising sketches he quickly submitted upon learning there was no work to be had for craftsmen. As it happened, Fouquet was a naturally talented artist, and he quickly distinguished himself from his peers. 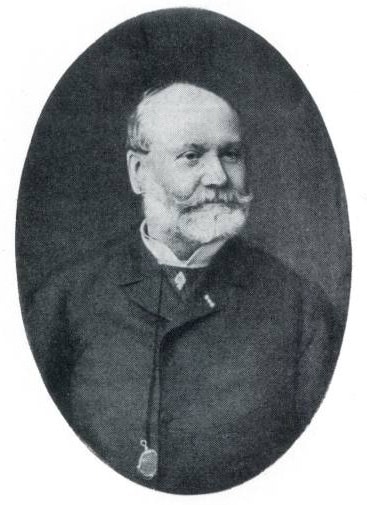 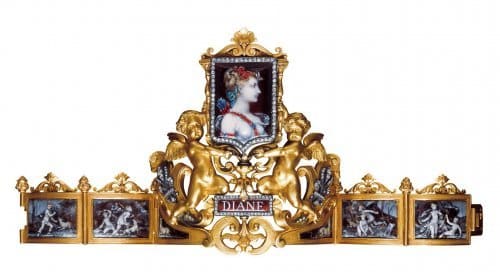 In 1860, after working for several firms, he opened his own shop. While first producing fine archaeological revival jewellery, Fouquet turned to the Renaissance revival style in the 1870’s and 80’s, creating some of the most stunning examples of revival jewellery from that era. His designs were fantastical, featuring sphinxes, dragons, mermaids, putti, and other mythological characters. Fine chasing, enamelling, and diamonds embellished the pieces. In 1878, when he exhibited his work at Paris’s Universal Exposition, Fouquet won a gold prize for pieces that were described as “absolutely flawless” by fellow jeweller Falize.2 His later work also prefigured Art Nouveau trends. In particular, he is credited with re-introducing the female form into jewellery, a practice considered “heresy” by some.3
In 1895, Alphonse’s son, Georges Fouquet, assumed control of the business. “A tireless worker,” says Vever, “he was enthralled by all things new, and his search for fresh inspiration was relentless.”4 By 1898, he was exhibiting jewellery in the Art Nouveau style. Indeed jewellery historians deem the firm’s work during this era second only to that of René Lalique.5 Its pieces were typically composed of gold and embellished with enamel, opals, horn, pearls, and, sometimes, finely-set diamonds. Naturalistic motifs predominated. Sensuously curvy lines, softly-colored enamels, and subtle textures were used to great effect. A host of celebrated artists were kept on staff during this time, including Alphonse Mucha, Charles Desrosiers, and Etienne Tourette. Mucha’s pieces, in particular, won the firm praise. According to art historian Vivienne Becker, his jewels were,”strange objects, theatrical and unwearable, shoulder and breast pieces, head ornaments draped with chains, with fabulously enamelled plaques Byzantine in flavour and entirely different from the usual run of naturalistic Art Nouveau jewels.”6 One of his most famous pieces was a serpent-motif bracelet habitually worn by actress Sarah Bernhardt. Until 1910, Fouquet continued to produce jewels in the Art Nouveau style. After that, the firm adopted a rather tamer and more abstract style, conducive to Edwardian sensibilities. 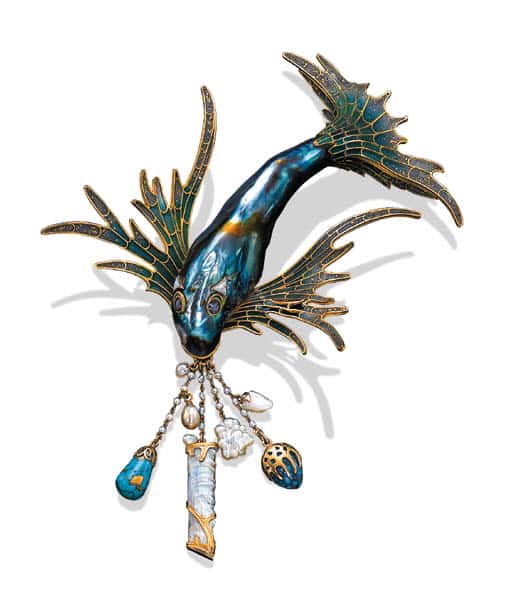 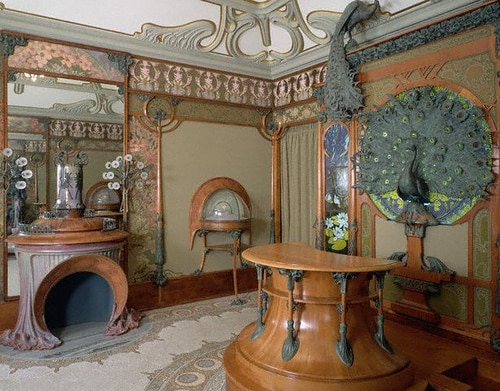