During the Migration period (5th century AD) Germanic tribes settled throughout Europe. Ostrogoths, Visigoths, Vandals, Angles, Saxons, Franks, Lombards and many more tribes that had been living on the eastern sides of the rivers Rhine and Danube had been under the influence of the Late Romans for quite a while by that time. This was reflected in their jewelry, the technical and decorative styles are not all that different from the Late Roman goldsmiths.

We have a good understanding of the jewelry worn by these tribes since they buried their dead with their jewelry. The spread of Christianity changed these rituals, from the 7th and 8th century on we have to rely on other sources like monastery inventories and wills next to rare finds of hoards of jewelry. 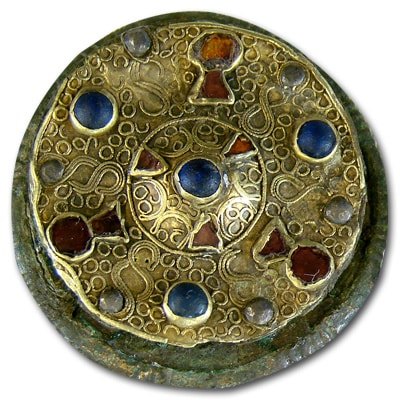 Up until the 8th-century golden coins from the Byzantine Empire would have provided the Germanic goldsmiths with their ‘raw’ material. Next to gold silver was fashionable and after the large quantities of Byzantine gold ceased to find their way into Western Europe Arabian silver became the most used metal for jewelry. For cheaper versions tinned, gilded and silver plated bronze was used.

Precious stones were very popular. Color was extremely important to the new inhabitants of western Europe. Sapphires, emeralds and above all garnets were used intensively. Enamels were used as well, mainly after Byzantine masters’ examples. Pearls from the Orient as well as freshwater pearls from Scotland were in great demand.

Sections of the Great Cross of Guarrazar. 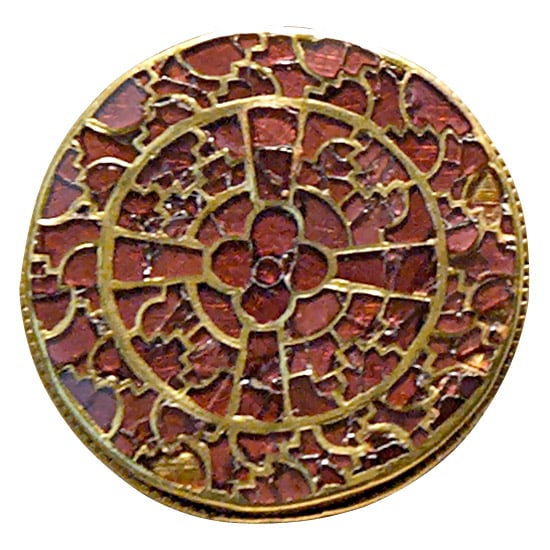 A strong use of colors and use of light characterize Germanic jewelry. The inlay of colored glass and stones and decorations with niello and enamel cause a feast for the eye. The polychrome (poly = many, chrome = color) character of Germanic jewelry was generally achieved by the use of gemstones but enamels have been used a lot as well. A very typical way of using the color red was to produce gold objects covered with cloisonnégarnet inlay. A basic shape was cast in gold and then further worked manually to form a geometric pattern of cells (cloisons) in which sliced and polished bits of garnet would be placed. A reflective surface, placed behind the stone, guaranteed a bright red appearance. Items decorated in this style often are stunning pieces of jewelry.

The technique had been in fashion with the Goths when they were still living on the Eastern side of the Danube and when they moved westward they introduced it to other Germanic tribes who adopted the decoration style. 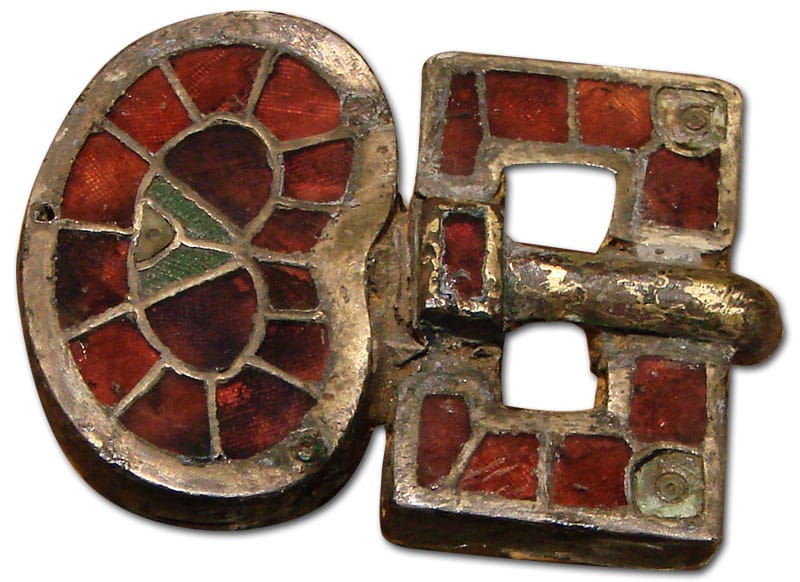 Metal parts were often covered in chased geometric patters and abstract animal shapes. These animal motifs were in fashion for over 500 years between 500 and 1000 AD on the British Isles, Continental Europe and in Scandinavia. Decorating metal with chased and hardly recognizable animal images was done in a similar style on the British Isles and Scandinavia. This has been described under the term ‘Style I’. 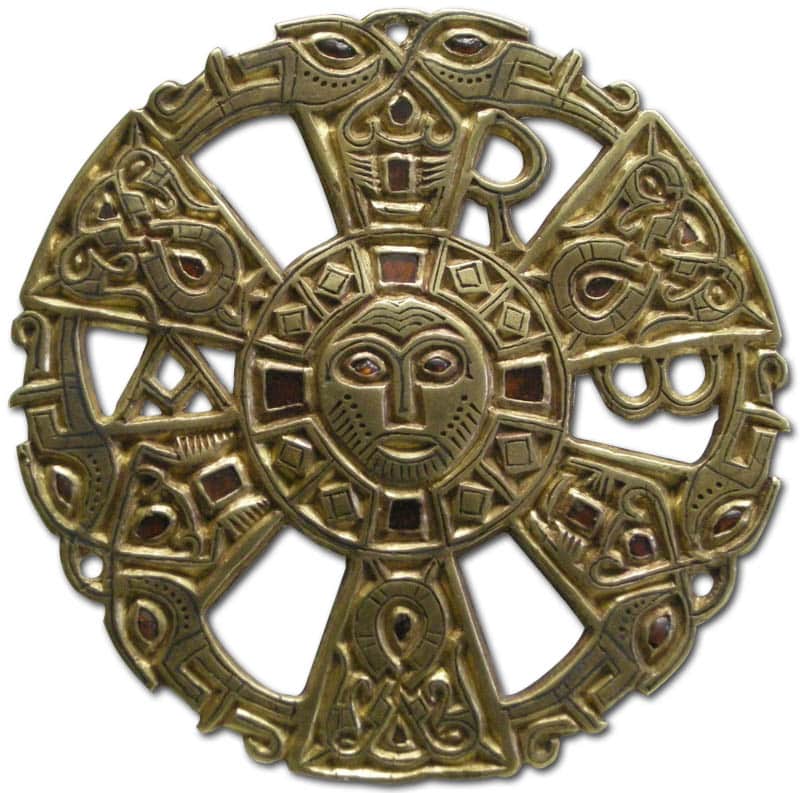 The dense decoration looks chaotic at first glance but a closer look often reveals perfect symmetry or hidden images. Later, a new style emerged, one that came into use over the whole of Europe, which was called Style II. This style comprised a more regular pattern of interlacing animal bodies and parts thereof. Decorations in higher relief were often cast and were further decorated with repoussé, filigree or granulated parts. This casting required complicated molds to be made and the technique applies especially for Viking jewelry which had developed away from Mediterranean influences.

The introduction of Christianity to the Germanic tribes didn’t change the decorative styles much, except for the emergence of the cross as a popular motif. Due to the ending of pagan burial traditions, we have to rely on very few random finds of surviving objects to describe 8th and 9th-century Germanic jewelry. Niello was used on both gold and silver and cloisonné enamel techniques were by this time known in the West. 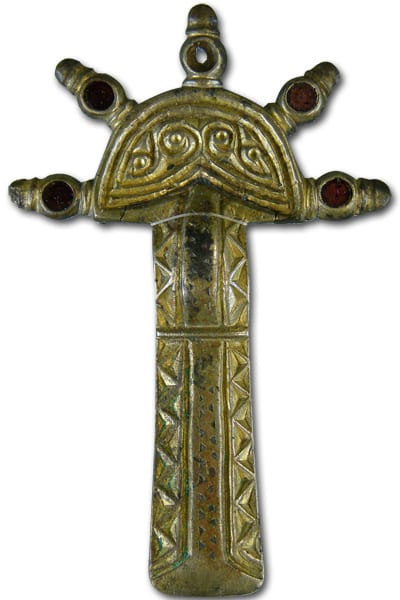 Germanic jewelry often had a functional purpose instead of being a purely decorative object. The most common objects from the Early Middle Ages are garment fasteners. These brooches, of which some were derived from antique fibulae, are found in several forms. Disc- and penannular brooches were by far the most common and were used to secure robes and capes at the neck or shoulder. Bird fibulae were popular as well. Further items like clasps, large belt buckles and smaller ones to secure footwear, sword suspending ornaments and armor were often heavily decorated in the jewelry styles of the time.

Women wore rings, bracelets and necklaces and archaeological excavations show that lengths of glass beads or amber were worn across the chest, suspended from the dress. Earrings were uncommon objects in the jewelry boxes of the Germanic ladies in the Early Middle Ages. 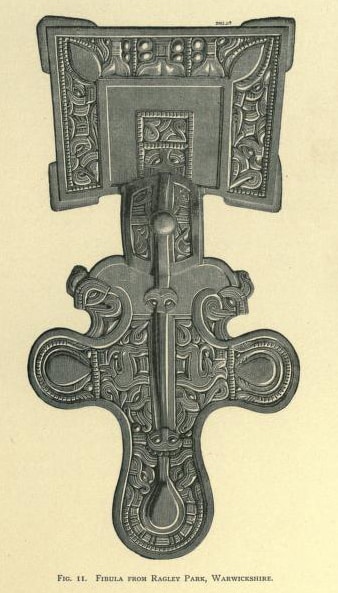 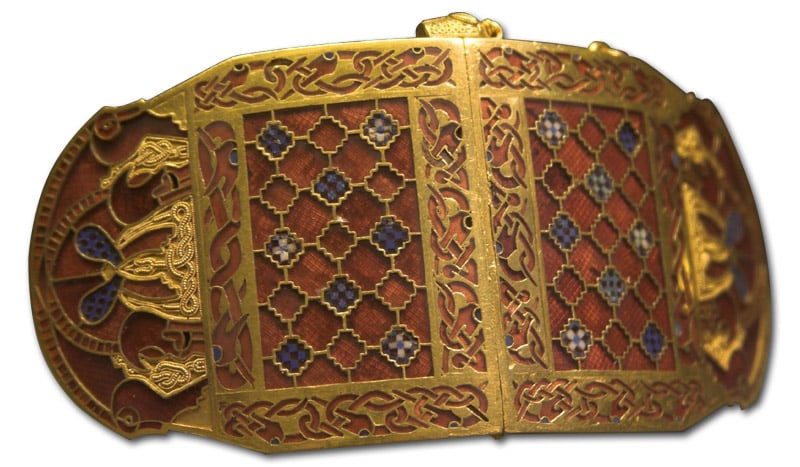 Illustrated above is one of the shoulder clasps found at Sutton Hoo. Note the inlay work. These are slices of garnet and millefiori glass, cut to fit the cloisons (cells) in the goldwork. A patterned, reflective foil placed behind the garnets assures a bright red color. These pieces show the exquisite craftsmanship of the goldsmith(s) that have produced the royal decorations.

In 1939 the burial site of an early 7th-century Anglo-Saxon king, believed to be King Raedwald of East Anglia, was excavated at a place called Sutton Hoo near Suffolk in the United Kingdom. The king had been given a traditional ship burial and was sent off to the world of the dead with a vast array of goods. Among the grave finds were some of the most beautiful pieces of Germanic jewelry known to us. 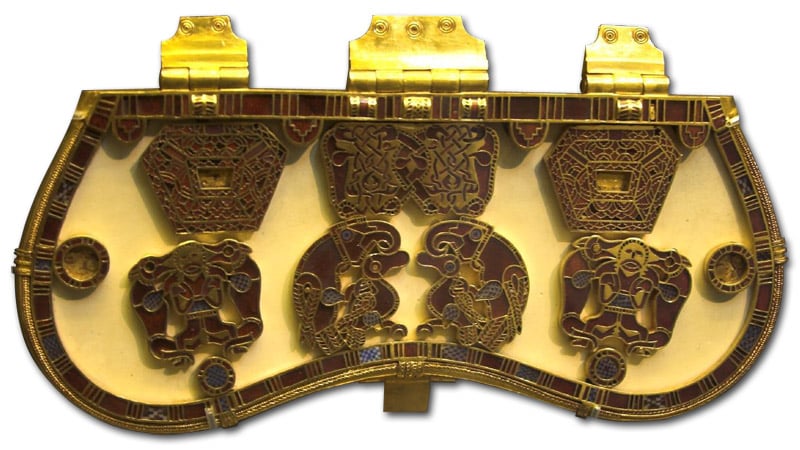 A most remarkable find of Visigothic jewelry has been that of the Guarrazar Treasure, found near Toledo in Spain. It comprises a total of 11 crowns of which the most elaborately decorated one is seen here. It is decorated with pearls and precious stones and is more than likely made by goldsmiths in the service of the kings Recceswitnth and Swinthila. The crown pictured here has the words ‘RECCESVINTUS REX OFFERET’ – presented by king Recceswinth – hanging down from the crown’s rim. The crowns probably have had a votive function, a belief that has come from the fact that matching chains are present from which the crown can be suspended. Note the use of the cross at the end of the central chain; Christianity had found its way into the hearts and minds of the Germanic tribes. The crown is an example of Byzantine influences on Germanic decorative styles. 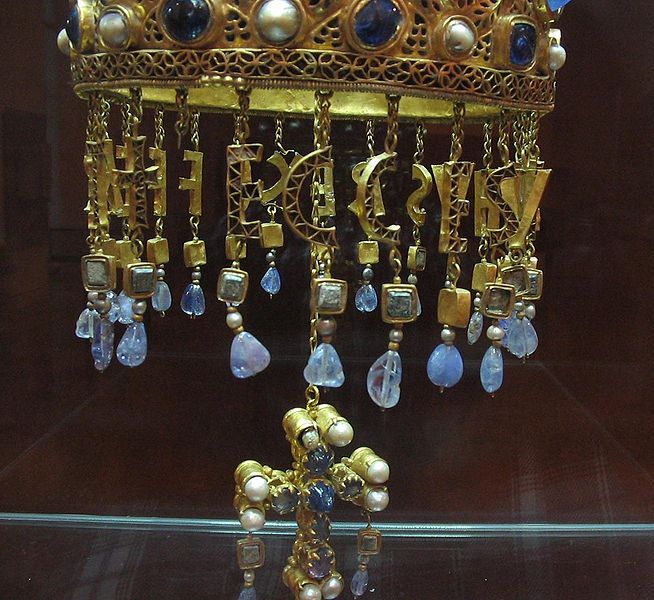