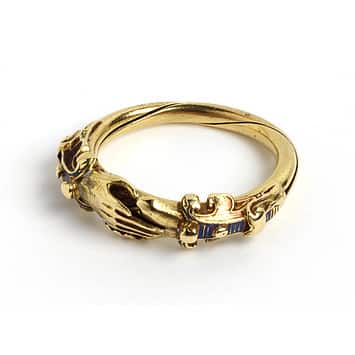 A gimmel ring (from the Latin gemellus meaning twin) is a ring that is made up of two or more separate hoops, sharing a split shank such that the hoops can be united and worn as a single ring. Gimmel rings are attributed to French in origins and were given in friendship or as popularly used in the Renaissance, as tokens of love or betrothal. These rings were sometimes separated, one part each worn by the betrothed couple and then reunited as one ring on the bride’s hand. Whether adorned with gemstones or clasped hands, gimmel rings were often inscribed with the name of the couple as well as a written inscription referring to the sanctity of the union.

In her book on rings Diana Scarisbrick describes a rare variation:

The rarest and most valuable gimmel rings also contain, hidden within cavities underneath the stones, figures of a baby and a skeleton, symbolic of the beginning and end of life. These memento mori figures relate to the biblical warning against the vanities of worldly life: ‘We brought nothing into this world and it is certain that we carry nothing out’ (I Timothy 6:7 and Job 1:21) 1