The iconic San Francisco Jewelers, Granat Bros. got their start in 1905 when brothers Joseph and Leo Granat opened their first store in Stockton, California. In 1927 they built a combination retail outlet and manufacturing workshop at the northwest corner of Mission and 20th Streets, moving from a previous location a block north on Mission Street. Their flagship store was located at Grant and Geary in San Francisco and opened circa 1922. There were nine retail outlets by 1961 and the chain eventually grew to approximately twenty stores. In August of 1961, they sold off the retail side of Granat Bros to Zales and the manufacturing side to an unknown entity. Their dies were used to produce their designs well into the 1980s, but these later items were not signed with the distinctive Granat trademark.

The company specialized in wedding and engagement rings with the claim of having the “Largest selection of diamond rings in all of Western America.”1 Eventually they established nationwide distribution through over 5000 established local retailers. Granat Bros. held a trademark on the name Wed-Lok and attempted, unsuccessfully, to patent the process of these interlocking wedding sets in 1950. Their patent was denied for “lack of invention” as there were many predecessors who produced similar interlocking rings. Other Patents and Trademarks include: Flair (08/07/1951 for Rings and 06/24/1952 for Watches), Heiress (04/15/1952), Fleur de Lis (1/22/1952) and Love-Loop (2/20/1951.) 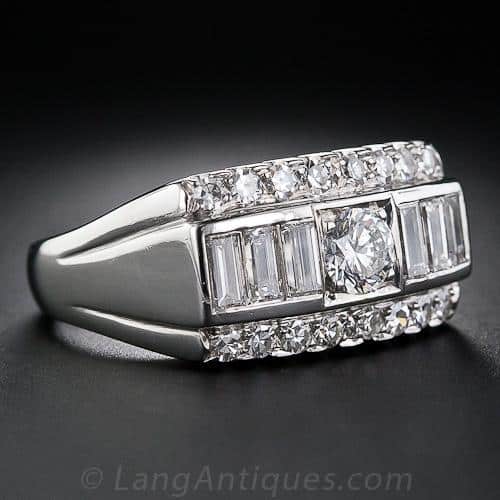