If ever there was a famous diamond named for a certified scoundrel, it’s the Hastings Diamond. Using this gem as a tool to enhance his questionable reputation, politically blindside his unsuspecting King, and throw a country into turmoil, this diamond’s namesake, Warren Hastings (1732-1818,) was – either by design or stupidity – a master in stirring controversy. Appointed the British Governor-General of India from 1773 to 1784, Hastings created such a huge political headache for King George III that the monarch became the subject of some of the most scathing political satire of his time in various cartoons, writings and even in song.

All of this controversy began as an innocent gesture when in 1785 Nizam Ali Kahn of the Deccan decided to give a 101 carat diamond as a gift to King George III. Nizam’s mistake was selecting Hastings as his go-between in presenting the impressive stone to the King. As they say, timing is everything and Hastings was bestowed with the task of passing this gift from one monarch to another at a time when the former British Governor-General was on trial in England for so-called “irregularities” while in power.

The diamond’s arrival in England in 1786 immediately followed a crucial trial vote in the matter of Hastings’ ongoing political problems. In an effort to gain favor with his King, Hastings, upon presenting the diamond to King George III, omitted – or at the very least downplayed – the fact that it was a gift from Nizan Ali Kahn. Leaving the impression that it was a personal gift from him to King George III, the British media of the day (similar to the British media of present day) seized on Hastings’ glaring omission, inferring to the public that King George III accepted the diamond as a bribe from Hastings to secure his influence on the positive verdict. Without the true facts, the public became predictably incensed at the news which the media stoked to a fever pitch. Hastings – with the ability to set the record straight-backed away from the firestorm, taking no action to defend his King. Rumors swirled that Hastings had used his riches in the past to influence others in society and that his gift to the king was just a fraction of his personal wealth. It was an impression that Hastings enjoyed cultivating even as his fortune was being drained by his legal issues. 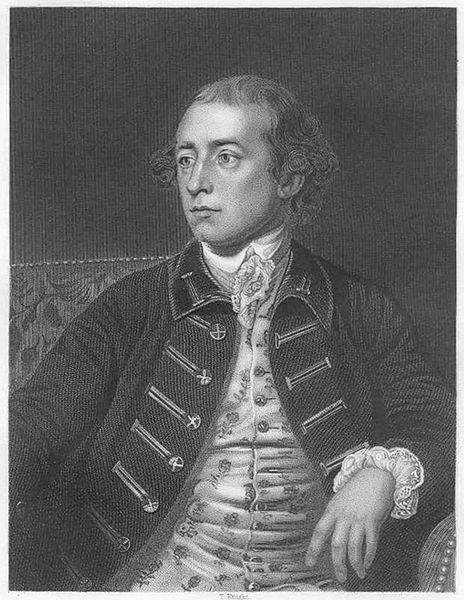 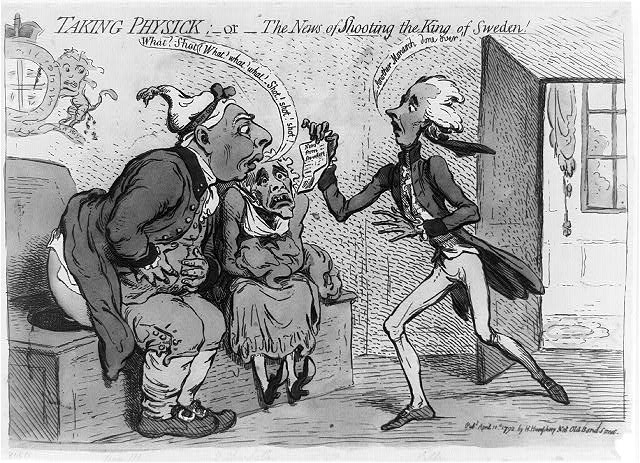 George II Was a Popular Subject of Public Ridicule. Here the Monarch is Depicted Sitting in Latrine when Hearing the News of the Death of Sweden’s King.

Meanwhile, the luckless King George III was reduced to the role of Hastings’ patsy. Coming a few years after England’s loss of the American Colonies, the British monarch was now forced to endure additional public ridicule. Much of it came from cartoons displayed in shop windows. Using an advertisement poster for a popular contemporary street performer named “The Greatest Stone Eater,” protesters altered the image, replacing the juggling “Stone Eater” standing next to a pile of stones with that of King George III, holding a diamond in his mouth with a pile of diamonds located nearby.

Streeter in his book The Great Diamonds of the World quotes Thomas Wright from his Caricature History of the Georges this ballad that was written in “honor” of the occasion:

I’ll sing you a song of a diamond so fine,
That eon in the Crown of our Monarch will shine;
Of its size and its value the whole country rings,
By Hastings bestowed on the best of all kings.
Derry down…

From India this jewel was lately brought o’er,
Though sunk in the sea, it was found on the shore,
And just in the nick to St. James’s it got,
Conveyed in a bag by the brave Major Scott,
Derry down…

Lord Sidney stepped forth when the tidings were known,
It’s his office to carry such news to the throne,
Though quite out of breath to the closet he ran,
And stammered with joy, ‘ere his tale he began.
Derry down…

Here’s a jewel, my liege, there’s none such in the land,
Major Scott with three bows, put it into my hand,
And he swore, when he gave it, the wise ones were bit,
For it never was shown to Dundas or to Pitt,
Derry down…

“For Dundas,” cried our Sovereign, “unpublished and rough,
Give him a Scotch pebble – ‘tis more than enough –
And jewels to Pitt, Hastings justly refuses,
For he has already more gifts than he uses.”
Derry down…

“But run, Jenky , run!” adds the king in delight,
“Bring the queen and the princesses here for a sight;
They never would pardon the negligence shown,
If we kept from their knowledge so glorious a stone.”
Derry down…

“But guard the door, Jenky! No credit we’ll win
If the prince, in a frolic, should chance to step in;
The boy to such secrets of State we’ll ne’er call,
Let him wait till he gets our crown, jewels and all!”
Derry down…

In the princesses run, and surprised, cry “O, la!
Tis as big as the egg of a pigeon, papa!”
“And a pigeon of plumage worth plucking is he,”
Replies our good monarch, “who sent it to me!”
Derry down…

Madam Schwellenberg peep’d thro’ the door at a chink,
And tipped on the diamond a sly German wink,
As much as to say, “Can we ever be cruel
To him who has sent us so glorious a jewel?”
Derry down…

Now God save the queen! While the people I teach,
How the king may grow rich, while the Commons impeach,
Then let nabobs go plunder and rob as they will,
And throw in their diamonds as grist to his mill.
Derry down…1

For all the media hoopla and the pain endured by King George III the current fate of the Hastings Diamond is unknown, having disappeared after the scandal. There is some faction that believes it may have become the central stone in the Westminster tiara. The round brilliant diamond featured in the center of the Westminster tiara weighed only 32.20 carats. Harry Winston purchased the tiara in 1959 from Sotheby’s and he re-cut the stone to 26.77 carats and sold it to a private client. The diamond resurfaced, again for sale, in 1970. Because of the vast discrepancy in the size of the diamond from the tiara and the reported weight of the Hastings, we can never be absolutely sure that this is the Hastings diamond.