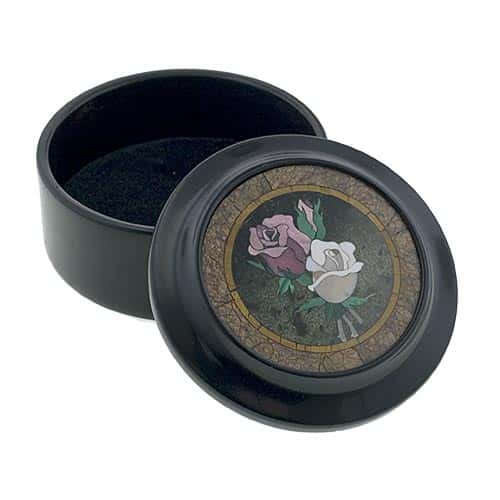 A Jet Box with a Pietra Dura Inlay.

Jet is a type of brown coal used since the Stone Age for personal adornment. Formed from the fossilized wood of a Jurassic period tree that upon dying, often ended up as driftwood that was swept out to sea. From driftwood it became waterlogged debris, sinking and eventually being buried under many layers of mud, decaying organisms and other aquatic detritus. Under great pressure for millions of years and with all of the requisite elements, ordinary driftwood is thus transformed into the gem we refer to as jet.The necessary ingredients and chemistry were present in abundance on the north-eastern coast of Great Britain 180 million years ago, in particular, the area around the fishing port of Whitby, Yorkshire.

Gathered from what could be found loose on the ground, jet was used to carve decorative objects, beads, and jewelry since ancient times. Mining from the cliffs around Whitby began as early as 1500 BC.1 During the Roman occupation, this area was excavated in search of the velvety black gem to make jewelry, dagger handles, carvings, dice and hairpins that were exported throughout the Roman Empire.

During the Medieval era jet was used by the monks of Whitby Abbey to carve rosaries and religious jewelry. In other locations around Europe and North America, where jet was mined, it was primarily carved into amulets, religious items, and jewelry. 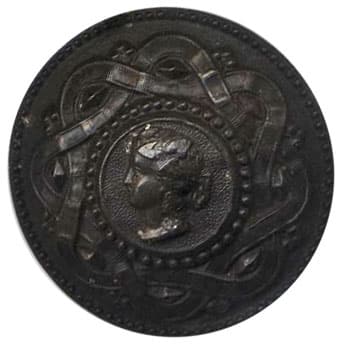 It was not until the unprecedented demand for mourning jewelry during the Victorian era of the 19th century that excavations of jet in Whitby became extensive. Forty years of mourning began with the death in 1861 of Queen Victoria’s consort, Prince Albert, and ended only with her own death in 1901. Jet’s rich black color made it a very popular gem during this period.2 After the period of mourning ended it is perhaps not surprising that a more colorful palette was welcomed and Jet and other black jewelry that had been in such high demand, quickly fell into obscurity. Many items have survived in good condition from the Victorian period in spite of jet’s low ranking on the Moh’s Scale of Hardness (4).

There are two types of jet, referred to has hard and soft even though they are both fossilized wood and relatively soft. Hard jet is believed to have been formed in the presence of salt water and soft jet in fresh water. Their appearance is relatively the same, but soft jet is a good deal more brittle and fragile than hard. The mining areas for this intense black material were, apart from the main source in Whitby – hard jet, Spain, France and North America – soft jet.

When rubbed jet can produce electricity. Due to this electrical property, jet is also sometimes referred to as black amber. Friction can also produce a typical coal odor, which is strongly associated with the brown coals found in the Northern areas of the United Kingdom. Another attribute of Jet is that it takes a high polish. It can be easily damaged by heat and chemicals. Heat will cause it to burn, while chemicals may cause it to loose its luster. As a positive consequence, a hot needle test (and the resultant odor) can be used to discriminate jet from look-a-likes such as vulcanite and plastics.

Other black materials which were used in mourning jewelry and which may resemble jet.