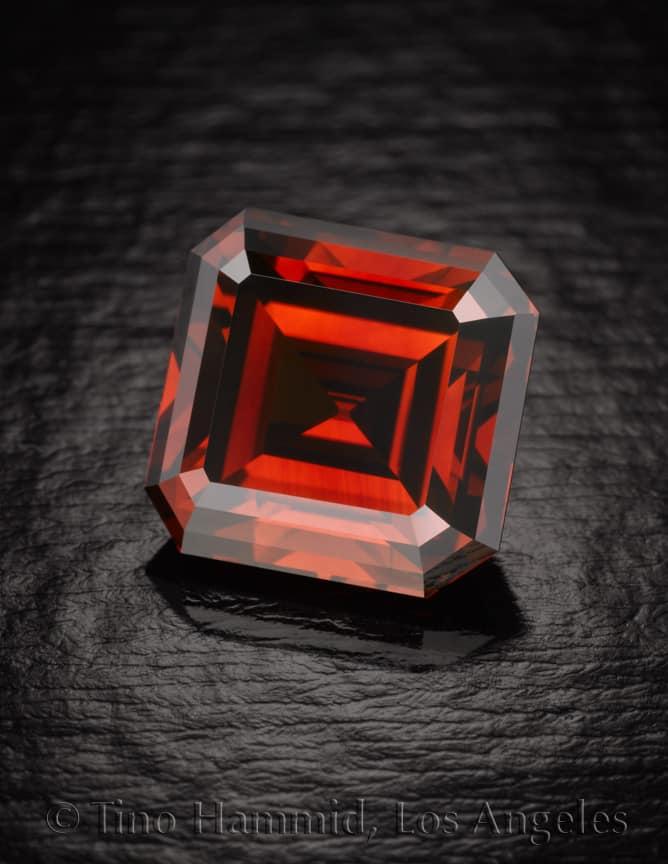 This stone belongs to an extremely small – and select – group of diamonds. It is one of only three red diamonds known to exist in the world today weighing in at 5 carats or more. Its rarity makes putting a value on it a challenge. Despite its unique – and beautiful – red color, this diamond has at times been given a surprising lack of respect, with many an untrained eye misidentifying it as a ruby. The greatest danger to its existence came when it was confiscated by the Nazis during World War II. Surviving the war, it was returned to its rightful owner only to be sold repeatedly until disappearing from public view for years. But this stone’s story has a happy ending, for it eventually found its way into the hands of a benevolent owner who uses the stone’s celebrity to promote and finance humanitarian causes throughout the world. This is the legacy of the Kazanjian Red Diamond.

These were heady times in Lichtenburg, in the Western Transvaal of South Africa during the years of 1926 and ’27. The area was enjoying a remarkable run of amazing diamond finds. In truth, this diamond “strike” was so plentiful it nearly led to the collapse of the diamond market! Among the more fascinating finds was a 35 carat rough diamond appearing to be black bort. Purchased for a mere £8 per carat, this diamond anomaly was sent to Amsterdam to be cut.

Arriving at the firm of Goudvis Brothers, opinions were mixed as to whether this stone could yield anything of value. An initial cut of two windows was performed, but the black color remained. Undaunted, the cutter pressed on, polishing additional windows, reducing the diamond to 23 carats, and causing it to sport a brownish color. Continuing his work on the stone, the cutter fashioned a crystal shape that resulted in a reddish glow. Finally, an emerald-cut diamond of 5.05 carats was created revealing a remarkable deep ruby red color, the largest red diamond in the world. This was a title it would hold until it was eclipsed by the cutting of a 13.11carat rough in the 1990’s into the 5.11 carat, triangular brilliant named the Moussaieff Red.

Evaluating an extremely rare stone such as a red diamond is very difficult. There is almost nothing to use for comparison and, until a buyer is found, its worth on the open market can only be roughly estimated. It was this challenge the Goudvis Brothers faced when they tried sending the red stone to New York to be sold. The reaction to this magnificent red diamond was at best indifferent and it was recalled to Amsterdam. Later, when Tiffany & Co. in New York expressed an interest the stone was sent out again. An offer of $100,000 was made but the brothers wanted $150,000 and they recalled the stone once again. It was a decision Goudvis Brothers would soon be regretting.

With their occupation of the Netherlands during World War II, the Nazis stripped the country of its valuables. Diamond inventories belonging to the world’s most famous cutters and dealers – including Goudvis Brothers’ – were confiscated. The red diamond – along with countless other gems – was sent to the Nazi stronghold at Berchtesgaden, Germany to be stored with other seized war booty. It would remain there for the duration of the war, awaiting liberation by Allied forces. With the conclusion of the conflict, the Allied armies discovered the Nazi’s massive collection of war spoils stored at Berchtesgaden and began the monumental task of sorting through it. A General McNarney reported to the war-loot commission that they had found a large collection of diamonds and a ‘ruby.’ Louis Asscher, head of the commission, knew at once that this was not a ruby but the Goudvis Brothers’ red diamond and it was returned to them.

Unfortunately, the war left many European businesses in bad financial straits. The Goudvis Brothers’ estate was no exception. To pay off its debts, the estate sold the red diamond to broker George Prins for 57,000 guilders. Prins then, in turn, sold it to Sir Ernest Oppenheimer. From Oppenheimer, it went to the Royal Asscher Diamond Company, Ltd. They sold it to a private collector in 1970, reportedly in New York. It was this sale that would result in the diamond’s disappearance from public view for nearly 37 years.

It was during one fateful day in February of 2007 at the offices of Kazanjian Bros., a Beverly Hills, California gem and jewelry firm that the diamond unexpectedly resurfaced. Young Douglas Kazanjian was running the business on his own for the first time while his father was away and unreachable in New Zealand. A client from the Far East visiting the firm on another matter stated to Douglas that she owned a red diamond. Since red diamonds are extremely rare, Mr. Kazanjian asked

Do you mean you have a ruby?1

She insisted it was a diamond and several months later she finally brought the stone in for examination. To Kazanjian’s amazement, it was indeed a red diamond and not a ruby.

Flipping through Ian Balfour’s book Famous Diamonds, Douglas noticed a story about a red diamond that didn’t have the usual enticing photo of the diamond being written about, only a drawing depicting diamond miners and the title “Red Diamond”. He became convinced though that what they were holding was the adventurous red diamond discovered so long ago in Lichtenburg and not seen in many years. Douglas reported to the author:

At the age of thirty, I’d found the most rare stone I’ll ever see.2

But what to do about it?

The two gentlemen who originally founded Kazanjian Brothers were Douglas’ grandfather and great uncle. Fleeing Turkey in 1912 just ahead of the genocide, Douglas’ grandfather emigrated to America. His great uncle had to remain in Paris because of an eye infection that would have prevented his entry into the United States. This proved providential as he stayed with an uncle and learned the sapphire cutting trade. In 1918 they reunited and started Kazanjian Brothers, becoming famous for owning and selling the finest African rubies. Since this was historically the most famous diamond to have been confused with a ruby, and was nameless, Douglas Kazanjian saw it as a sign that they should buy the diamond and name it in honor of their company’s founders.

Making an offer on the diamond, their client decided to take it back with her one more time to show her daughter before agreeing to sell it to the Kazanjian’s. They waited a long, slow month to hear her answer regarding the sale.

Upon purchasing the stone and renaming it the “Kazanjian Red Diamond,” it now has a noble role as part of the Kazanjian Foundation, established in 1957, to help charities including those that work with disadvantaged children and underprivileged youth. It is displayed around the world, with other famous gems and jewelry, to raise money for the foundation. This author was privileged to view the diamond on display at the Natural History Museum of Los Angeles County and found it to be an incredibly beautiful deep red diamond of remarkable clarity.