In 1876 René Lalique (1860-1945) began his career as an apprentice to the eminent Parisian goldsmith Louis Aucoc. Though keen to learn the trade, Lalique was more interested in the general arts. He enrolled at L’École des Arts Décoratifs from 1876-78 and then traveled to London, where he attended the School of Art at Sydenham from 1878-80. Returning to Paris, he studied sculpture with Justin Lequien and designed textiles for a relative.1 In 1881, Lalique started to design and manufacture jewelry, selling the pieces to firms such as Aucoc, Boucheron, and Cartier.

In 1885, he opened a boutique of his own and enjoyed ten years of unprecedented creativity and success. Adopting the themes, techniques, and materials of the emerging Art Nouveau movement, Lalique refined them to their apogee. His jewelry featured sinuous lines, creeping branches, vines, and flowers, as well as fetching, scantily clad women. The pieces were embellished with organic and unusual gemstones as well as delicately shaded plique-à-jour enamelling. In 1900, critics at Paris’s Exposition Universelle unanimously lauded his jewels, singling them out as the finest examples of contemporary design. 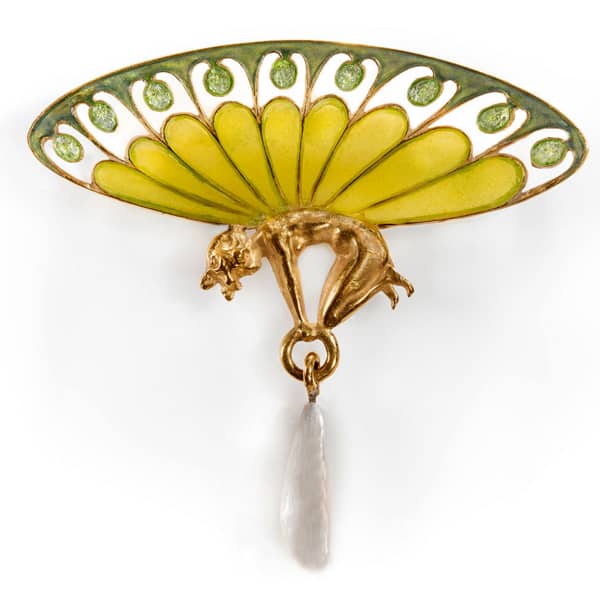 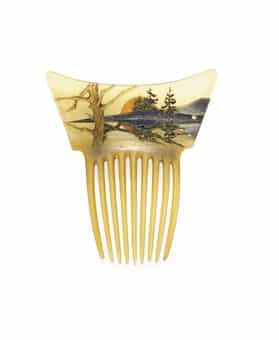 Around the same time, he began drawing and fabricating glass objects, an enterprise to which he would fully devote himself in the 1920’s. In 1925, at the Exposition des Arts Décoratifs et Industriel, the exposition for which the Art Deco design era was named, his glass objects were again the talk of the show. Though refusing to work with gold in his later years, Lalique nonetheless continued to create brooches and pendants in glass.

His workshops were closed in 1937 and 1940. When Lalique died in 1945, his firm lived on, with his son Marc succeeding him. In 1977, daughter Marie-Claude picked up the mantel. The firm continues to this day, producing fine crystal objects.