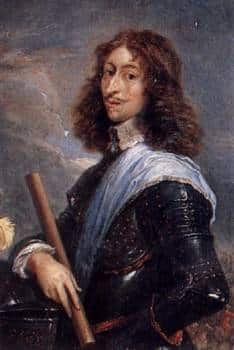 If there was an award for the most gaps in a historical diamond’s story, Le Grand Condé would lead the competition. Its discovery is unrecorded. Much of its travel through time cannot be authenticated. It’s very likely it was never a part of any monarch’s crown jewels. It cannot even live up to its name of “grand” as it is one of the smaller historical diamonds. Perhaps this is one case where the diamond’s namesake is more notable than the diamond itself. For it was named for the brave, colorful, talented, patriot, hero, traitor, and resourceful Frenchman Louis II de Bourbon, Duc d’Enghien, Prince de Condé (1621-1686), also known as Le Grande Condé, fourth prince of Condé.

The path that Le Grand Condé traveled to finally become the property of its namesake is a long and winding one and still up for much debate. The first unconfirmed historical mention of the diamond finds it in the possession of Tavernier in Golconda. What we know for sure is that, at some point, the diamond found its way into the hands of French King Louis XIII. Whether or not it was sold to him by Tavernier cannot be verified.

Meanwhile, Louis II de Bourbon’s career path, that would eventually gain him the ownership of the famed pink diamond, began at the tender age of seventeen when he began serving as Governor of Burgundy. Upon completion of his education by the Jesuits at Bourges he was sent to the Royal Military Academy in Paris where he exhibited a talent for all things military. His success resulted in an illustrious army career which began in 1640.

Unfortunately for Louis, his stint as commander of the French army at Fuentarrabia got off to a rocky start and as a result, his career suffered a setback. Later, assigned to the army of Picardy, he redeemed himself by finding success at the siege of Arras and his military career was once again on the fast track.

On May 19th, 1643, at the age of 22, Louis II de Bourbon was responsible for the victory of the French against Spain at the battle of Rocroi. This was the first major defeat of Spain at the hands of the French in the Thirty Years War and France’s greatest victory in over one hundred years. It would be the greatest triumph of Louis II de Bourbon’s career. It was this event – according to popular lore – that propelled King Louis XIII to show his appreciation for the magnificent victory by bestowing upon his talented army commander a gift from a grateful French nation – a 9.01 carat pink pear-shaped diamond. The problem with this scenario is that King Louis XIII died on May 14th, 1643, just days before the famed victory at Rocroi, making this version of how Louis came into possession of the diamond, Le Grand Condé, unlikely.

With the death of his father in 1646, Louis II de Bourbon inherited the title of Prince de Condé and was awarded control of Burgundy, a very large part of France, along with several other smaller territories. Louis’ family was in control of a major portion of the rest of France, thus making him a very powerful person at the court of King Louis XIV.

After a career setback at the siege of Lleida, Louis resumed his military successes with victories against the Bavarians at Nördlingen and the Spanish forces in the battle of Lens where he was responsible for the peace signing at Munster. Louis’ successes brought out the jealousy of his contemporary, Cardinal Mazarin, the very person responsible for the prince de Condé being appointed to the command that leads to the defeat of the Spanish. Now, regarding Louis as a threat, Mazarin had him imprisoned in 1650. He would remain imprisoned for thirteen months until a civil war in France between the Parliament and the Nobles, called le Fronde, resulted in his release. This action eventually concluded in Mazarin’s exile and prince de Condé’s defection to Spain. Condé served with the Spanish forces from 1651 until his defeat at Dunkirk on June 16, 1658. Although aligning with Spain was a treasonist act, Louis was pardoned in 1659 by King Louis XIV. However, he would languish for years before the King trusted him enough to give him a new assignment.

That assignment put Louis II, prince de Condé in command of French troops in 1668. Most of the French victories in the time between 1668 and 1675 can be directly attributed to his leadership. Although there is no documentation, logic would dictate that this was the time period where King Louis XIV probably presented him with the diamond that was to bear his name. What we do know is that – somehow – the beautiful pink diamond was now in the possession of Louis II, prince de Condé, Le Grande Condé as he was now affectionately known. The diamond, bearing his title, would remain in the hands of his successors for many years.

Upon the death in 1886 of a descendant, Louis, Duc d’Aumale, the Château de Chantilly and all his possessions were bequeathed to the Institute de France, including the diamond, Le Grand Condé. An important stipulation of the will was that the diamond never leave Chantilly. These terms were met until October 11, 1926, when the diamond was stolen by a couple of hapless Alsatian thieves. Now on the run in Paris and desperately needing a place to hide the stolen gem, the thieves concealed the diamond inside an apple and left it in their Paris hotel room. Much to their chagrin, the bejeweled apple was discovered there several days later. Today Le Grand Condé remains safely on display in the Gem Room (Le cabinet de Gemmes) at the Condé Museum, Château de Chantilly, Chantilly, France.