A Maltese Cross is an 8-pointed cross with 2-point pairs forming v-shapes on the 4 equilateral arms of the cross. The Maltese Cross was officially adopted by the Order of the Knights Hospitallers of St. John in 1126. The eight-points on the cross denote the eight obligations of the order of St. John, namely “to live in truth, have faith, repent one’s sins, give proof of humility, love justice be merciful, be sincere and whole-hearted, and to endure persecution. Then in 1888, Queen Victoria recognized the Order of St. John and the fact that they were carrying out very substantial charitable activities. Queen Victoria realized that the Order of St. John had the largest empire of followers in the world and today it still spans over 40 countries across the world charring out the charitable work they do for various needs.

The Men always wore a white Maltese Cross and the Women wore the Jeweled Crosses. There are very few of these Jeweled Crosses in the market because they stay in the families they belong to and are handed down. 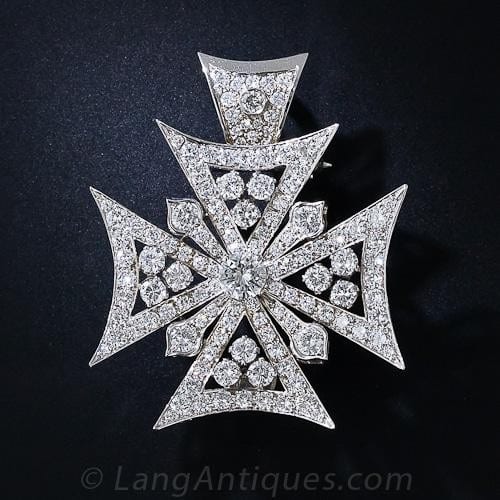