Marshall Field & Company aka Marshall Field’s was a legendary department store in Chicago Illinois. The origin of Marshall Field’s can be found in a dry goods store opened in 1852 by Potter Palmer (P. Palmer & Co.). Arriving in Chicago in 1856, Marshall Field, after working for several of Palmer’s competitors, joined in partnership with Palmer. Seeking partners for his business the now ill Palmer took on Field and Field’s associate, Leiter, and the firm became Field, Palmer, Leiter & Co. Unable to raise all of the necessary capital, Palmer put up a good deal of the money for Field and Leiter’s shares. Once Field and Leiter reimbursed Palmer (c. 1867) Palmer withdrew and the store became known as Field, Leiter & Co. 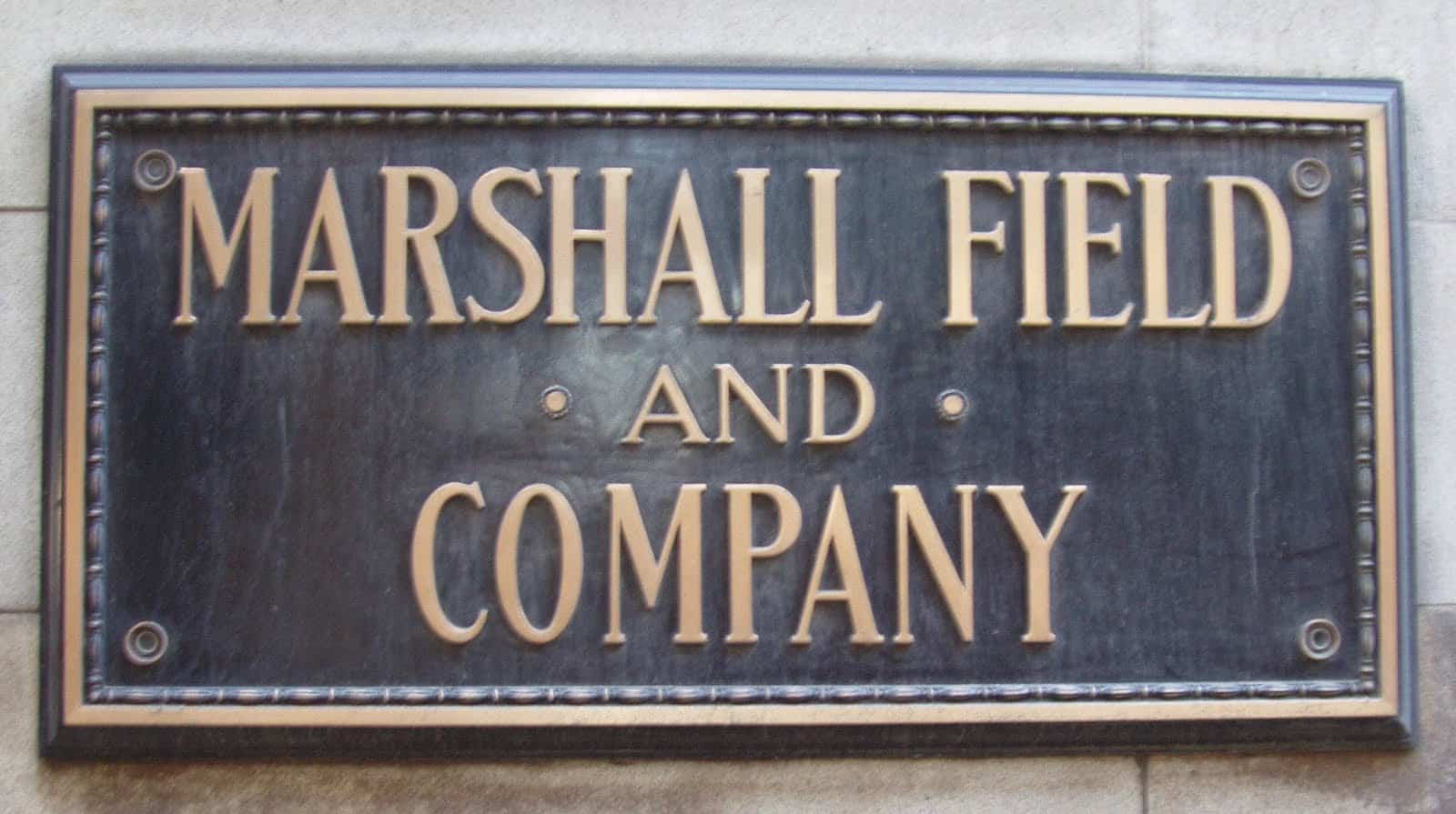 Palmer held key real estate in downtown Chicago and he leased Field, Leiter & Co. a six-story office building at State and Washington Streets. In October of 1871, the Great Chicago Fire destroyed the State Street building that housed Field, Leiter & Co. Fortunately, loyal employees of Field, Leiter & Co., led by Leiter, had worked feverishly to remove as much merchandise from the path of the fire as possible. As a result, they were able to reopen later that month in a temporary location. By April they occupied a building at Madison and Market.

Despite the fact that Palmer sold off the lot to raise capital to rebuild some of his other sites, Field, Leiter & Co. reopened at their original location on State Street in the fall of 1873. This time the lease was held by Singer Sewing Machine Company. Bad luck followed and another fire destroyed the store completely in 1877. When Singer built a six-story building on the site, Field and Leiter purchased it from them and, in April 1879, once again set up shop on State and Washington.

Renaming the business Marshall Field & Co., Field bought out Leiter’s shares. Continuing to expand, Field built a wholesale store on Franklin Street where he sold bulk merchandise to small businesses throughout the central and western United States. This was a highly profitable division of the business outstripping the retail business six times over. Business was so good that Field became the richest man in Chicago, in fact, one of the richest in the United States.

The fancy surroundings and luxurious merchandise at Marshall Field’s set them apart from other retailers at the time. Field began to buy up the adjoining buildings to gain additional space for the growing retail division. Marshall Field & Company incorporated in 1901. A twelve-story building on State Street opened in 1902 and in 1906 another new building opened on Wabash Avenue.

Marshall Field’s opened the fully equipped Marshall Field & Co. Craft Shop and Metal Foundry circa 1904. Attempting to capitalize on the Arts & Crafts movement they made both handwrought and machine-made items. The shop remained open, producing Arts & Crafts jewelry, including hatpins, brooches and bracelets, hollowware porringers and candy dishes and flatware in sterling silver, brass, and copper, until 1950. A distinctive acid etched patina was applied to many of the items produced in this manner. In the later years of the Craft Shop “handwrought” items were only partially handmade.

Marshall Field died January 16, 1906 and John Shedd was named the company’s new president. Shedd completed the rebuilding by pulling down the 1879 structure and building a new State Street building in keeping with the 1902 design. An incredible favrile glass ceiling (the largest ever built) was a major feature of the new building. In 1912 Shedd bought the Trude building, tore it down and built the last section to complete the store which now encompassed the entire city block. Shedd continued to expand the wholesale business as well while growing the manufacturing division. He retired in 1922.

Under the presidency of James Simpson, the retail operation expanded and a discount store under the name “The Davis Store” was opened on State and Jackson. Marshall Field’s branded branches began opening in 1928, the first at Market Square in Lake Forest and later that year in Evanston. In 1929 the Oak Park Store opened and they acquired Frederick & Nelson in Seattle. 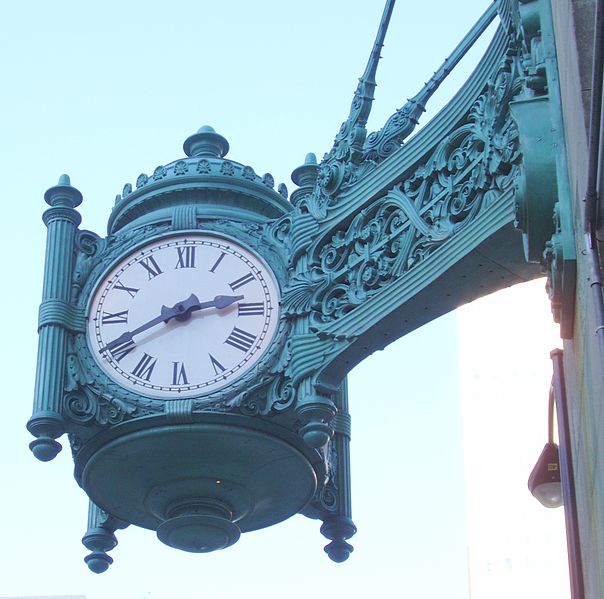 The Clock at Marshall Field and Company, Chicago (Taken at the Corner of Randolph and State Street). Photographer: David K. Staub

As a result of opening the Merchandise Mart to house the wholesale division, Marshall Field’s needed an influx of capital just as The Great Depression hit. Changes in the way wholesale business was conducted, together with the Depression, caused the division to be liquidated in 1936. Retail operations continued to grow following World War II. New stores were appearing all over Illinois as well as Wisconsin, Ohio, Washington and Texas. Field’s acquired many other regional department store chains.