This diamond story is an unusual one. In most instances, a name is attached to one or perhaps two diamonds but in this case, Mazarins refers to a group of 18 stones! Then there is the diamonds’ namesake — an unusual character with an even more unusual career path. An Italian by birth, Giulio Raimondo Mazzarino would move to France and immerse himself in everything French, including taking on a French name. His talents, charms, and “hobbies” would allow him to rise to the inner circle of French nobility.

He would become a Cardinal in the Roman Catholic Church even though he was never a priest and was rumored to be married – no easy feat! His hobbies included satisfying a gambling addiction and flirting with the Queen of France. It was all these attributes that, over the years, gave the now renamed Italian – Cardinal Jules Mazarin – the wealth to collect the impressive group of diamonds destined to bear his name, the Mazarin diamonds.

Educated by the Jesuits in Rome, Giulio Raimondo Mazzarino picked up not only an education but some serious gambling habits as well. Rumor has it he was forced to consent to an arranged marriage to pay off some gambling debts. Later, Mazzarino found himself in the service of the Pope, where during war time he proved himself to be very trustworthy. 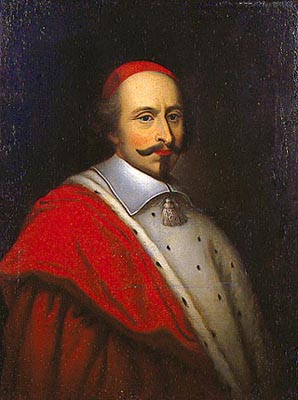 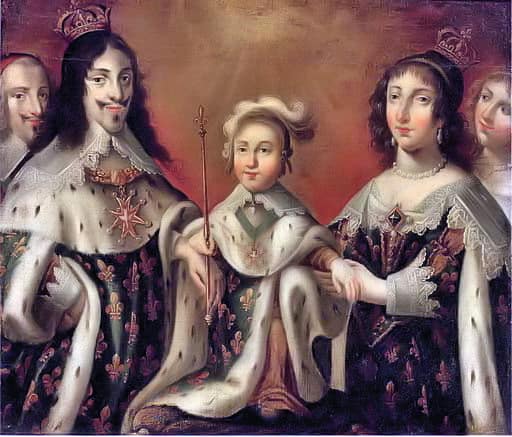 Richelieu, Louis XIV as a Child and His Mother, Queen Anne. Look Who’s in the Left Behind Richelieu…

The French Cardinal Richelieu, much impressed with Mazzarino, invited him to Paris. Once in the French capital it did not take long for Mazzarino to become Richelieu’s trusted adviser and confidant. Now calling himself Jules Mazarin, he became a naturalized French citizen in April of 1636. Whether it was King Louis XIII requesting his appointment to Cardinal as a reward for his service to France, or Richelieu wanting to ensure his protégé’s future in France, Mazarin became a Cardinal in 1641.

Mazarin also caught the eye of Queen Anne in an unusual way. One day while gambling at the court, Mazarin was winning big with a large pile of gold in front of him and an even larger crowd of on-lookers. Whether it was to impress the Queen or merely satisfy a gambling addiction he couldn’t control, Mazarin bet his entire winnings during the last round and won. Crediting the Queen’s presence for his good fortune, Mazarin further endeared himself to the Queen by sharing his gambling gains with her. After the death of Richelieu, Queen Anne, now regent and an admirer of Cardinal Jules Mazarin, appointed him to the post of First Minister of France.

During the regency of Louis XIV, Mazarin served as a virtual co-ruler with the regent, Queen Anne. He shaped policy in France, doing much to make France a predominate force in Europe while educating the young king. In addition, he was rumored to have been secretly married to the widowed Queen. His policies and the perceived weakness of the Regency were the cause of two revolts against him. However, Mazarin’s subtle manner, compared to that of the brazen Cardinal Richelieu, kept him at the side of the French monarch until his death in 1661.

During his lifetime, Cardinal Jules Mazarin continued to amass great wealth including the acquisition of the group of diamonds that would eventually bear his name. When and where he picked up the majority of these diamonds is open to speculation. We do know that he acquired the “Mirror of Portugal” (Mazarin III) and the “Sancy” (Mazarin I) diamonds either directly from England’s King Charles I’s widow, Henrietta, or from an intermediary, the Duke of Épernon. The Duke had been holding these stones as collateral for a loan to the Crown of England that Henrietta had negotiated while her husband was alive. When the loans defaulted, the Duke kept the diamonds and, to recoup his losses, sold them both to Cardinal Mazarin. After the death of King Charles I of England, Cardinal Mazarin struck a deal with the new ruler of England, Oliver Cromwell, there-by gaining ownership of the late King’s treasure. This transaction undoubtedly yielded other diamonds that could have become part of the famous 18. Cardinal Mazarin is also credited as being the first to have a diamond cut into a brilliant – sometime during the reign of Louis XIII.

At his death in 1661, Cardinal Mazarin left his magnificent collection of eighteen diamonds to the French Crown, with the stipulation that they should always be known as “The Eighteen Mazarins” (or 12). Their value in modern terms, was nearly ten million dollars. Louis, lover of gems, set three of the stones in his sword handle. His waistcoat of satin, under his court coat of embroidered velvet, was covered with diamond buttons, buckles and diamond orders. 1

The Mazarins were inventoried for the record by the crown in 1691 and again in 1791. Despite there being discrepancies in the weight of some of the diamonds (some gained weight) both lists support the number of diamonds in the collection as 18.

However, fate would not be kind to Cardinal Mazarin’s beloved collection. The 18 Mazarin diamonds were among the items stolen during the famed robbery of the Garde Meuble in 1792. Although a few of them – the Sancy (Mazarin I), Mazarin IV, Grand Mazarin (MazarinVII), and Mazarins VIII XIII and XVI – were recovered following the robbery, the rest – including the “Mirror of Portugal” (Mazarin III) – passed into history. Occasionally a diamond will surface claiming to be part of the lost Mazarin collection. Unfortunately, the carat weight never matches the original inventories. This could be because the diamond is not part of the Mazarin collection or because, through the course of time, the diamond had been re-cut. Sadly, there is really no way to tell, making reuniting the entire 18 diamond collection virtually impossible. 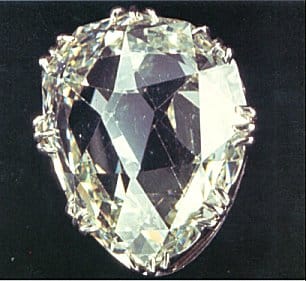 The Mazarin I: the Sancy

A brooch worn by Empress Eugenie – said to be set with Mazarins XVII and XVIII (but not verified) – the Mazarin VII, the Grand Mazarin, along with the Sancy (Mazarin I), are currently on exhibit at the Louvre.