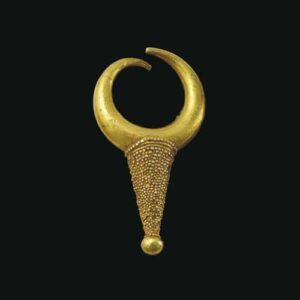 The Minoan and Mycenaean civilizations were known to have traded with Egypt and the Middle East. Indeed, they had paved roads to connect them to major cultural centers. As a result of the extensive trading networks, they had adequate access to gold along with copper, tin and ivory to create jewelry and decorative objects. The earrings produced during Protopalatial Minoan Crete era (1900-1700 B.C.) were tapered hoops with overlapped ends. During the Neopalatial (1700-1400 B.C.) and Postpalatial (1400-1150 B.C.) periods we see more scalloped and tapered hoops. The introduction of a conical pendant with twisted and braided wirework begins a new style of earring, no longer composed of just a Mycenaean Gold Earrings
c. 13th Century B.C.
Photo Courtesy of Christie’s.