Compose the niello in this manner; take pure silver and divide it into equal parts, adding to it a third part of pure copper, and taking yellow sulfur, break it very small… and when you have liquefied the silver with the copper, stir it evenly with charcoal, and instantly pour into it lead and sulfur.1 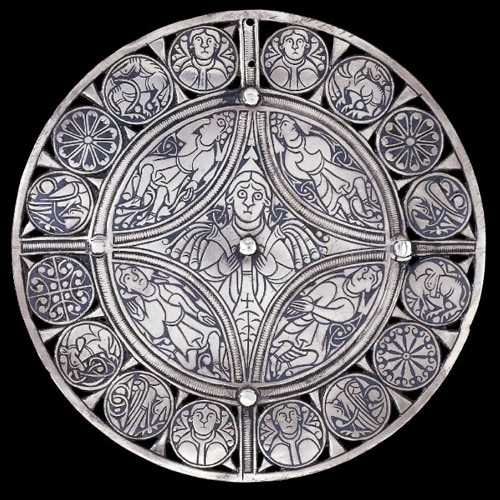 Niello (from Latin: Nigellus = “blackened”) is a metallic alloy with sulfur which is used as a surface decoration technique which, much like enamel, is fused to a metal base. The luster of niello, however, is metallic instead of vitreous and it is much tougher than enamel. Niello comes in just one color – black of various tones – which contrasts highly with silver, the most popular base for niello work. Through the use of engraving, etching, chiseling or embossing techniques, an indentation is made in the work and filled with the black sulfide alloy. The methods used in niello are similar to émail champlevé and émail de taille d’epargné’, although most other enameling techniques can be used as well. Due to these similarities, niello is sometimes misnamed black enamel.

The Egyptians from antiquity used a variation of this decoration technique as did the ancient Romans. During the Roman occupation and migration period niello spread throughout Europe, as can be seen from Anglo-Saxon finds in Britain, as well as in Eastern-Europe. The Byzantines also had a great love for this technique. At the dawn of the Gothic period, niello was revived in the Rheno-Mosan area of Germany and the low countries. It reached its height during the Renaissance when great masters such as Francesco Francia and Maso Finiguerra executed niello works to perfection. At the end of the 18th-century, this method of surface decoration was revived again and remained popular, to some extent, during the 19th century and the early 20th century. The town of Tula in Russia became especially famous for its niello work, which accounts for the alternate name of Tula silver. Around 1900 most niello work came from this town, some 200 km. south of Moscow,2 where it was applied to watchcases, objects de virtu, jewelry, guns, and tableware.

A legend (presumably from Giorgio Vasari) tells that Finiguerra may have invented printing by chance, from steel engravings while working on a niello plate. Before the work was dry, a sheet of paper fell on the engraved plate with the wet niello and an impression was made. Although very narrative, this is considered a myth.3 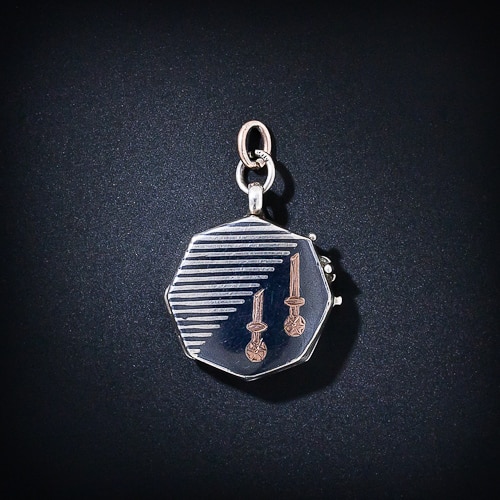 Niello is commonly applied to silver due to the high contrast between the silver and the black niello. It was also applied to gold (especially in Byzantium). Some sources report that it does not hold well on copper alloys due to its lead content, but that only applies to the more modern versions of niello as the lead was probably added to the mixture as of the late Byzantine era (around the 10th century).4

François Schweizer analyzed Byzantine niello works from different periods and concluded that there were 3 different mixtures used during the evolution of the Byzantine arts,4 which he categorized:

According to Schweizer, the lead was added in the 10th century to create a lower melting point for the niello mixture, making it easier to work with. The earliest text on niello, by Pliny the Elder in the 1st century AD, confirms this later addition of lead because it does not mention lead at all, merely the type II niello composed of copper, silver, and sulfur.

The next recording of niello work is from the 12th century by Theophilus where lead is added to the recipe. Cellini used this formulation in the 16th century and his recipe, with some variations, is still used today. Niello also developed in many other countries outside Europe, possibly the most prominent being Thailand where it is still widely used. 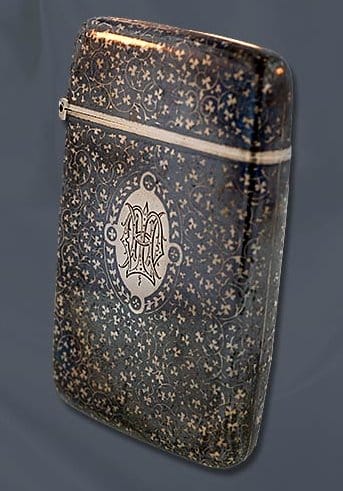 There are many recipes for this – grayish to deep-black – material. The more modern variety uses a mixture of silver, copper, lead, and sulfur with additions of borax. Sometimes antimony is added to the mixture to reduce shrinkage of the melt.2

In the modern version, silver and copper are molten at high temperatures so to create a homogeneous alloy after which the lead is molten and added to this alloy. When all the metals are mixed well, ground sulfur (which is yellow in color) is added until saturation. Both the lead and the sulfur cause dangerous fumes so this must be done in a well-ventilated room. The lead creates an alloy that has a low melting point (around 500 degrees Celsius) and the sulfur makes the mixture black. When antimony is added (as was common around 1900,)2 the final product experiences less shrinkage when the work is later heated in an oven. The amount of sulphur added dictates the depth of color tone of the niello.

The niello is now left to cool, either slowly or rapidly by pouring it into water. Rapid cooling shatters the niello and the resultant particles are ground to grains (not powder) with a pestle and mortar. Borax and water are added creating a paste. Molten niello can also be poured into a form to create a rod of the material which is sometimes used on very fine engravings. These days the better jewelry supply stores sell it in pre-fabricated form.

Through engraving, etching, embossing – or other method – a design is created on the work which will hold the niello. After thoroughly cleaning the object, the wet niello is applied in a similar fashion to enamel. Due to the shrinkage, enough of it must be applied, preferably in hillocks. The wet paste is now left to dry then fired in an oven. The niello will fuse with the metal base of the object. It may be necessary to repeat this procedure a few times to evenly fill the entire area, but it is best to do it correctly the first time. As an alternative, the object could be fired from below with a flame, which takes extra skill and practice as it could burn both the niello and the metal. (The lead will corrode the silver or gold at high temperatures.)

Sometimes pits from air bubbles are present on the surface of the niello after firing. These pits can be pressed out while the surface is still hot or smoothed out later with a steel burnisher.

When the niello has been applied with a satisfying result, the excess is scraped off or filed away. Then the work is finished in the usual way with sandpaper and pumice. The final project can be polished by hand or by machine. When a machine finish is chosen, great attention should be paid to not over-polish the niello as it grinds down twice as fast as the surrounding metal. It is preferable to give the work a high shine through hand-polishing with fine grit sandpaper and leather prior to machine polishing in order to reduce the time necessary on the polishing laps. It may also be left unpolished resulting in a matte appearance.

The whole item, including the niello, can be engraved as desired. The ancient Egyptians used to impress precious metal wires or other small ornaments into the hot niello for extra effect.5

Due to the various components of niello, the black tones may differ from maker to maker. It is the amount of sulfur added which usually dictates the tone. Tone can also be influenced by the composition of the silver-copper-lead alloy. When repairs are done on the piece the same recipe needs to be used or there may be a very noticeable tonal difference which can appear worse than the original fault. To avoid tonal variation, whole sections should be scraped away and redone while covering the other parts with a heat protector. Either way, this is a job for specialists.

The lead and sulfur contents of the niello are highly toxic and safety precautions should be taken while working with it. Good ventilation is especially important. Lead corrodes precious metals at high temperatures and all tools (files, scrapers, sandpaper) used on lead should be stored separately in the workshop. The smallest residue of the lead could transfer from the tools to a precious metal item and ruin your work, not to mention your health.