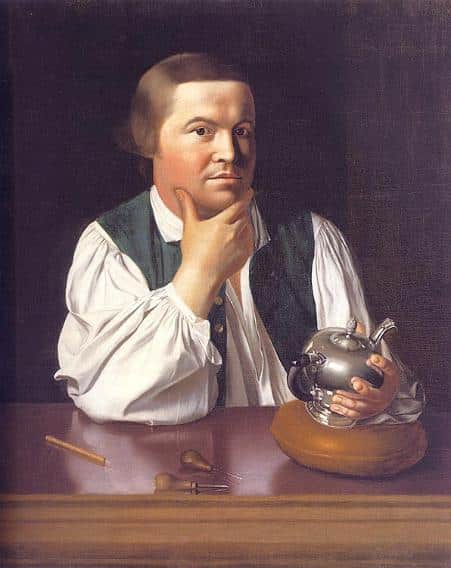 Paul Revere (1735-1818) was an American silversmith and goldsmith but is probably most well known as an American patriot. As a Boston goldsmith, Revere carried on the American tradition as not only a maker of jewelry, but also as a purveyor of jewelry. Revere’s first commissions, c.1760, were for small items such as buckles, buttons, medals and funeral rings. Revere’s account books have survived for historians to study:

Mr. Williams was one of Revere’s best jewelry customers in 1862. He bought a gold necklace for £2.10.8, with a locket costing seventeen shillings; one odd gold button worth five shillings and four pence; a pair of spectacle frames and glasses for three shillings; some silver spoons costing a little over two pounds; and a turtle shell ring lined with gold for nine shillings.1

When the American Revolution began, Revere was a key figure and at the time was making silverware and engraving prints. At the end of the eighteenth century, Revere (himself a Mason) was making complete sets of Masonic jewelry as each officer now had a symbolic jewel. Upon the death of George Washington, he was commissioned by the Free Masons of Massachusetts to make a small gold urn to hold a lock of the president’s hair. That urn is still in use by the Mason’s today.

After the war, Revere opened a hardware store and took up an interest in foundry work. He started a brass and iron foundry and made the first church bell ever in Boston, ultimately producing over 900 bells. In addition, they cast bolts and fittings used in ship construction. Pioneering copper plating, Revere open America’s first copper mill. Revere Ware continues to be a household name today.