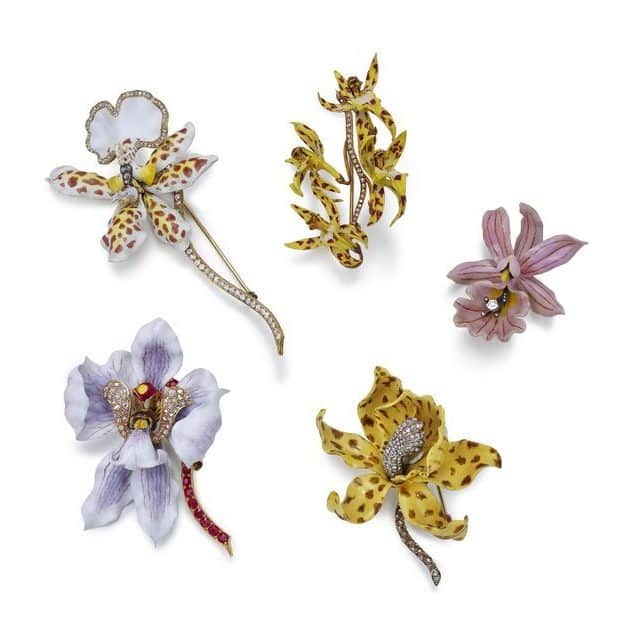 Paulding Farnham (1859-1927) was Tiffany & Co.‘s preeminent nineteenth-century jewelry designer. In 1885, at the age of 26, G. Paulding Farnham joined Tiffany’s design department. Studying under Tiffany’s chief jewelry designer, Edward Moore, Farnham quickly distinguished himself as a skillful and innovative artist. He was given the responsibility, along with Moore, of designing the jewelry for Paris’s international exposition in 1889 and was “universally recognized as the genius” behind Tiffany’s success there when the firm won an unprecedented six gold medals. 1

In particular, Farnham’s enameled and bejeweled orchids, faithful in detail to actual specimens, were hailed as exceptional. As Gustave Stickley, leader of the Arts and Crafts movement put it, “The copying of flowers in jewelry is, of course, no new thing…but the orchids of Messrs. Tiffany are the first that we have seen, and it would be impossible to surpass them, whether for cleverness of imitation or for perfection of workmanship.”2 French critics shared his view. They were, moreover, impressed by the wide variety of colorful designs, inspired by various sources: Native American pottery, Louis XIV, XV, and XVI fashions, Japan, East-Indian jewelry and Eastern-European design.

In 1900, Farnham helped to repeat the triumph, as Tiffany won the Grand Prize for its jewelry at the Paris Exhibition. The success was ascribed to the synergy between Farnham and gemologist George Frederick Kunz, who provided him with a fantastic array of colored stones including conch pearls, pink topaz, demantoid garnet, Mexican fire opals, Montana sapphires, and Arizona turquoise. Despite Farnham’s success, he was dethroned two years later in 1902 when Louis Comfort Tiffany officially assumed the role of the company’s design director following the death of his father, Charles Lewis Tiffany. In 1908, Farnham resigned from Tiffany & Co. due to continued creative disputes with LCT. He went West, settling in Mill Valley, California where he spent his remaining years creating sculptures and painting.