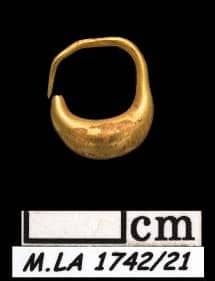 Phoenician jewelry found in Kition, Crete. Kition was one of the most important kingdoms of Cyprus, lying in the south-eastern part of the island (Fig. 1) and hosting one of the most significant hoards of Cyprus in Antiquity. The ancient town has a Mycenaean prehistory; however it also flourished since the 9th century B.C., when an important tribe of traders and seafarers came to colonize the area. Those seafarers were of course Phoenicians, originally from the famous city of Tyre in the Levant. Image courtesy, and copyright, of [www.marialuisavitobello.com Maria Luisa Vitobello].