With apologies to Charles Dickens, this diamond’s story could be entitled the “Tale of Two Diamonds” for its history diverges more than once into unconfirmed, but interesting, parallel stories. Wrapped around established facts, these stories make the Pigot Diamond saga all the more intriguing.

What is indisputable is that the namesake of this diamond experienced the “best of times” and “the worst of times,” having had more career ups and downs than a child’s yo-yo. This one-time employee of the East India Company rose to become, as noted in thePeerage.com, “Sir George Pigot, 1st and last Baron Pigot of Patshull.”1 George Pigot served two stints as Governor and Commander-in-Chief of Madras in India. During his first term, his contemporaries hailed him as a hero when, in 1758-59 – acting in his role as Commander-in-Chief – he successfully defended Madras from an attack by French forces. Parlaying the victory into an Irish Barony, Pigot resigned his post in 1763 and returned to the Emerald Island. 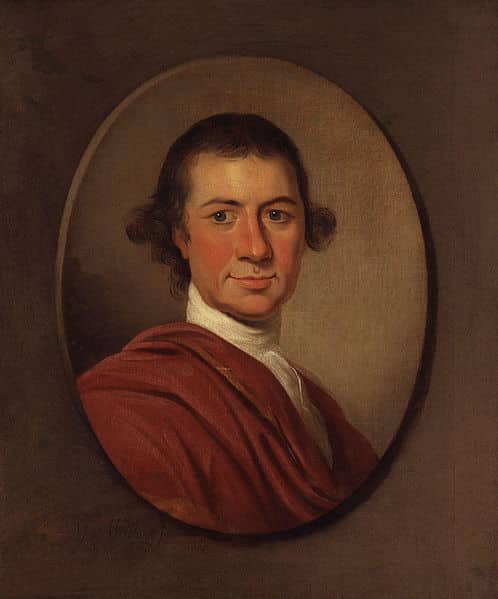 Life as a Baron must have been boring for George, for he returned as Governor and Commander-in-Chief of Madras in 1775. However, his second tour proved to be disastrous when he was imprisoned for crimes against the crown. It all started with an argument between the Nawab of Arcot and the Rajah of Tanjore. Acting in his role as Governor, Pigot mediated the dispute between the rival royal factions. It was during this time that Pigot came into possession of the diamond, but history is unclear about precisely how he obtained the stone. There are – you guessed it – two competing stories. One account has Pigot receiving the diamond as a reward from the Rajah of Tanjore. Another holds that Pigot received two diamonds, one of which was the Pigot, from the Nawab of Arcot. The smart money is on the Nawab of Arcot, for the prince was known to give diamonds as gifts. It was he who gave Queen Charlotte, wife of King George III, the famous Arcot diamonds. Regardless of who gave Pigot the stone, accepting a gift from either one of the parties involved in this dispute raised a few eyebrows at the East India Company. Declaring that gifts of this magnitude to its officers were not condoned, the East India Company imprisoned Pigot in August of 1776. They asserted that he had misused his powers in a manner that the company had not authorized. Parliament disagreed and passed two resolutions against the imprisonment of Pigot.

However, Pigot died the following year at the age of 58, while under confinement in Madras, India, before the matter of his imprisonment could be settled. As rumors swirled that Pigot was murdered for his differences with the East India Company, the stone that had cost him his life was passed down to his family, two brothers and a sister. Maintaining ownership until 1800, the Pigot family decided to sell the stone in a very novel way — by lottery. Requiring an act of Parliament, the strict rules for the lottery included that exactly eleven thousand four hundred and twenty-eight tickets be sold for two guineas each. The lottery was won by a buying “club” who had bought up a large number of the tickets. The proceeds of the lottery were £23,998 and sixteen shillings, as specified by Parliament.<p> <p>Following the purchase by the “club” the story again divides into two distinct versions. The Times recorded that it was consigned for sale with Christie’s of London in May of 1802. This sale was to a Mr. Parker of Fleet Street for £9,500. The other version shows it selling directly from the consortium to Rundell & Co. Eventually, the diamond ownership was recorded by Rundell and Parker for £10,000.

According to Famous Diamonds by Ian Balfour, Rundell and Parker described the Pigot as follows:

Its form is of a perfect oval about one and a quarter inches [31.75mm] in length by three-quarters of an inch [19.05 mm] broad. The water of it is of the most pure description and there is but only one imperfection in it and that does not interfere in the least with either its colour or brilliancy and must indeed be pointed out before it can be discerned. The defect alluded to is a very small red foul (so called by Jewellers) very near the girdle or edge of the diamond. The weight of this most beautiful Jem is 187 ½ gr.2

Meanwhile, in France, Napoleon Bonaparte, anticipating his coronation as Emperor and anointment as Pope, begins amassing gems for the occasion. Word spreads to England and a frustrated Rundell. Since France and England are at war, there is no direct way for Rundell to present the Pigot to Napoleon’s agents – French bankers Lafitte & Co. Turning to a trusted employee – a man of French decent named Liebart with family living in Liège – Rundell sends him to make contact with Lafitte & Co. With all the intrigue of a dime store novel, Liebart departs by secret means with the diamond securely sewn into his undergarments! He succeeds in transferring the diamond to Lafitte & Co. only to have to beat a secret and hasty retreat from Paris when Napoleon becomes suspicious that the Pigot is an English diamond. Lafitte & Co. keep possession of the diamond and poor Rundell must wait for the defeat of Napoleon before he can file a suit against the French company. The suit is successful and Lafitte & Co. return the diamond to Rundell in 1816.

With the diamond once again in their possession, Rundell & Bridge (as they became known after paying off Parker for his share in the stone) launch an all-out effort to sell it, sending replicas to suitable buyers all over the world. Eventually, a deal is struck with the Pasha of Egypt in 1822, through Briggs Brothers & Co., for £30,000, with a five percent commission going to the sellers. Again the story of the Pigot reaches a fork in the road. This version has the Pasha presenting the diamond to the Sultan of the Ottoman Empire in order to gain legitimacy for his right to govern Egypt. This buyer was believed to be Muhammad Ali (1769-1849).

Another very popular tale puts it in the hands of Ali Pasha of Jananina, Albania for a price of US $150,000. According to reports of the time, he was a cruel leader suspected by the Sultan of Turkey of setting up his own kingdom. He refused on many occasions to follow orders and sent gifts and excuses to the Sultan for his failings.

Ali Pasha, known collector of fabulous gems, decorated his personal den with a variety of stones. Whether he purchased the Pigot diamond for his personal collection or to adorn his incredibly beautiful Christian wife, Vasilikee, never be known. There were accounts that he liked to keep the stone close to him wrapped in his sash. Eventually, while still under the scrutiny of the Sultan of Turkey, he was ordered – through a messenger – to report to Constantinople. Resisting the order, Pasha tries to shoot the messenger, but after an exchange of gunfire, it is Pasha who is mortally wounded.

As this version of the story goes, while the Pasha lay dying he sends for a Captain D’Anglais, a friend and French soldier of fortune, and Vasilikee. He orders D’Anglais that under no circumstances is the Sultan to get his hands on his wife or the Pigot diamond. In an act of what can only be described as extreme overzealousness, D’Anglais is said to have crushed the stone with the hilt of his sword as Pasha drew his final breath. Then, turning to Vasilikee, D’Anglais is about to kill her when his actions are thwarted by agents of the Sultan. Captured and taken to Constantinople, the Sultan, upon laying eyes on the beautiful Vasilikee, offers her a very high place in his personal harem, but she refuses and is sent into exile. D’Anglais’ fate is unknown. Perhaps his punishment was living with the regret of having destroyed such a fabulous diamond. Whether one believes this tale or not – technically it’s impossible to destroy a diamond in the manner related in the story – it is the last time anyone sees the Pigot Diamond.

Its disappearance has been a matter of speculation throughout the succeeding years. Contributing to the difficulty in locating the Pigot is a weight discrepancy. It had been reported to weigh between 47 and 85.8 carats. Since the records at Rundell recorded it at 187 ½ grains it must have weighed 48.63 carats. The models made for the Great Exhibition of 1851 would seem to corroborate this estimate. A famed mineralogist, James Gregory, made somewhat more robust models for Rundell & Bridge and these models may have been the reason for the extreme discrepancy in the weight.

Whichever of them owned the diamond, how much it actually weighed will probably never be known. Occasionally a diamond with a similar weight will come up for public sale, but so far none have matched the description provided by Rundell with regard to shape and clarity. Mysterious beginnings, competing stories, and an equally puzzling ending distinguish the tale of the Pigot diamond.