Diamonds crystallize in various forms of which the octahedral and dodecahedral crystals are the two most common ones. These natural crystals have been adorned in their own right for millennia. The only source of diamonds until the beginning of the 18th century was India and it was here where mystical powers were attributed to the natural points. A well-formed crystal shielded the owner from all kinds of mishap and these gems were reserved for the highest caste only.

For centuries to come natural points would remain the most precious of all diamonds and all pointed crystals encountered in jewelry right up until the 15th century appear to have been uncut crystals. In gemological literature, these crystals have often received the name Point Cut, a term which is debatable because often there was no actual cutting involved apart from the removal of mineral matter which covered the crystals when they were found. 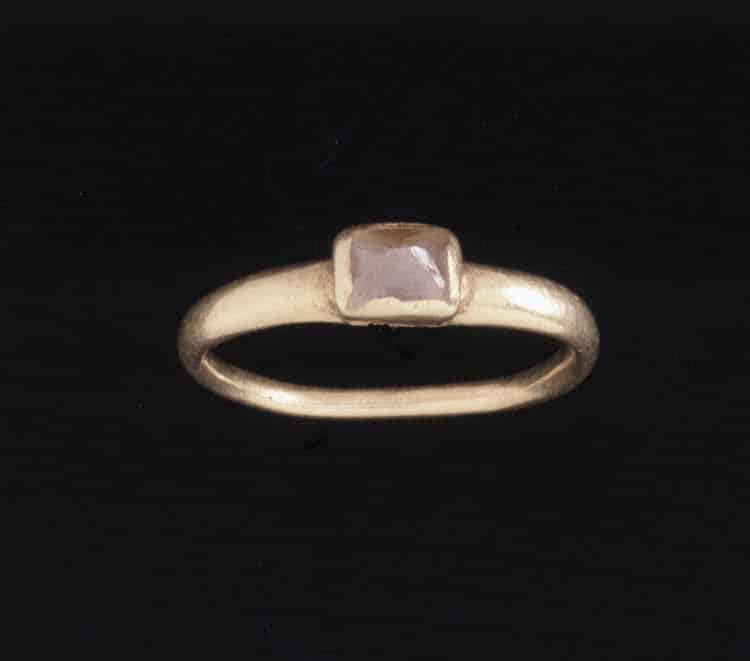 Natural crystals often have irregularities and are distorted. From the 15th century on diamond cutters would grind material off the stone trying to smooth the crystal and introduce some symmetry. In doing this they tried to keep the widest area of the stone intact; this became the girdle. After all, it’s this part of the stone that will determine the ‘look’ of its size. A diamond cutter, when handling an octahedral crystal, would have three possible girdles to pick from and would choose the one giving him the largest outline.

From ancient times on the common idea was that a diamond needed to be ‘natural and untouched’ to maintain the best of its magical powers. The point cut was a way to bring crooked and flawed crystal towards the ideal: a perfect octahedral crystal, without appearing modeled by man.

Diamonds are the hardest substance on earth but do feature directional hardness; the material’s ability to withstand scratching is different in certain directions. A diamond’s hardness along its natural octahedral faces is very high. Therefor the grinding would have to be done on an angle that diverged at least one or two degrees from the natural angle of about 54.75°.

The above implies that the stone’s points have to be cut shallower than the natural point. This slightly different shape causes different internal reflections within the crystal. A visible, diagonal square, touching the outline of the stone is what we see when we look down the point of a natural crystal. When the point is the result of fabrication its apex will be lower. The shallower the point, the smaller the diagonal square. This is illustrated in the images below. 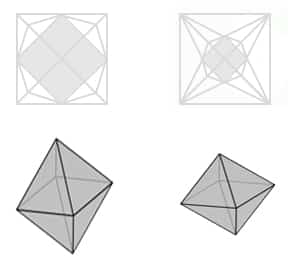 The Difference Between a Natural Point on the Left and a Fashioned Point with its Apex Lowered on the Right. 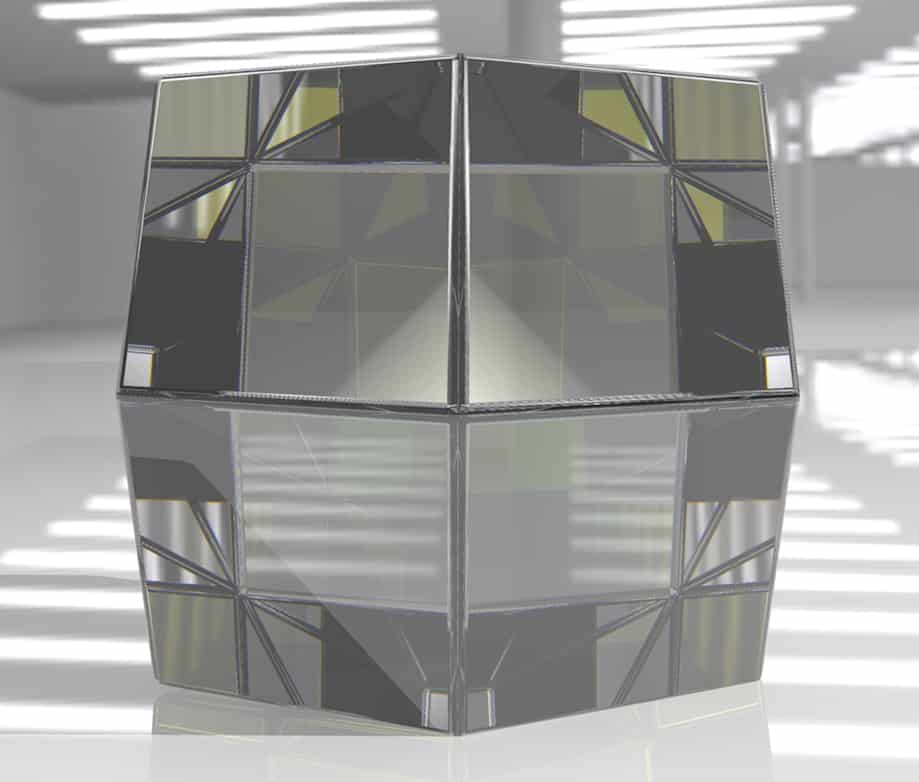 Computer Rendering of a Diamond Dodecahedral Crystal with Four of it’s Faces Facing the Camera. This Orientation is what Tillander Calls the Burgundian Point Cut.

Not all diamond crystals are octahedral though. Dodecahedral crystals are commonly found and they were treated in the same way by the diamond cutters of the 16th century. Irregularities would be smoothened and the faces polished. When a dodecahedron is orientated with four of its faces up, a design emerges which is named the Burgundian Point Cut by Tillander.

It was a small step from the first Point Cuts to the first Table Cuts. When, around 1500, Table cuts became fashionable many point cuts were transformed into Table Cuts. Both Point and Table Cuts were often set with reflective foils behind them to maximize the light return. Apart from the internally reflected light, the diamond’s superior lustre (surface reflection) makes it the brilliant gem it is. A high polish of the gem’s faces is vital to bring a stone’s brilliance (internal + external reflection) to its maximum. 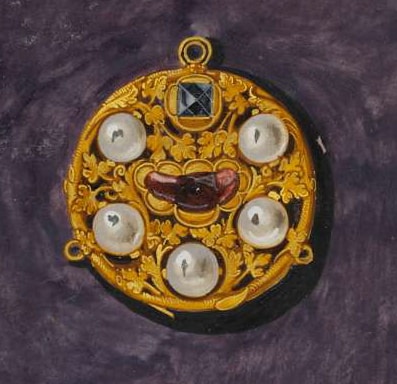 Because virtually all diamonds from the 16th century have been recut we are very thankful for the accurate paintings of an artist named Hans Mielich. Somewhere in between 1552 and 1555 he painted the jewelry collection of Duchess Anna of Austria (1528-1590), wife of Albrecht V of Bavaria, with a great eye for detail in the gemstones. Anna must have loved diamonds because she possessed a fair few! Below follows a short peek into the Kleinodienbuch der Herzogin Anna von Bayern which has been digitalized by the Bavarian State Library and comes highly recommended as a view into the past! 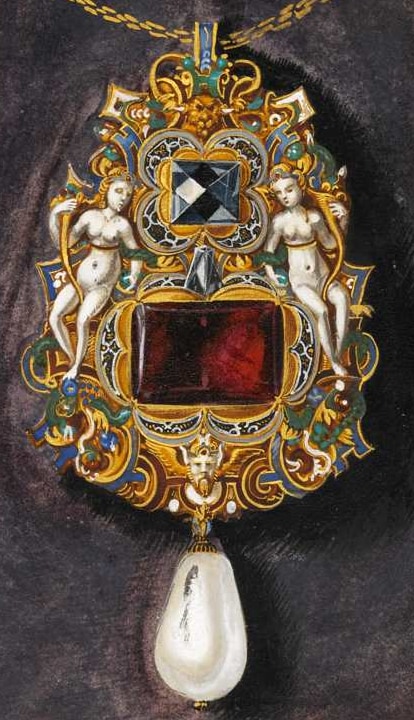 A Mirror Cut Ruby Surmounted by a Point Cut/Octahedron. 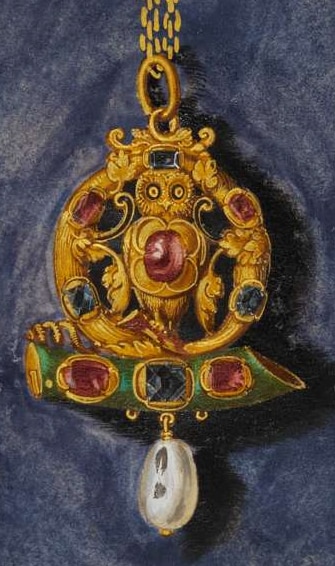 A Rather Large Octahedron or Pyramidal Point Cut When it was Polished, Above the Pearl. 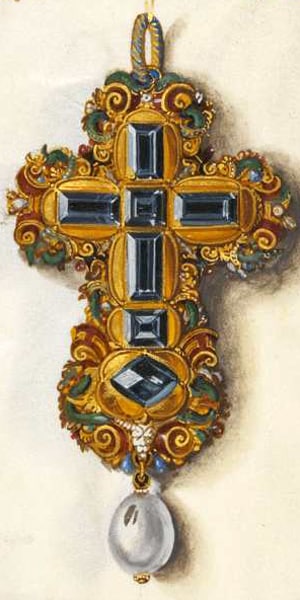 Several Table Cut Stones with a Dodecahedral Diamond or Burgundian Point Cut Below.