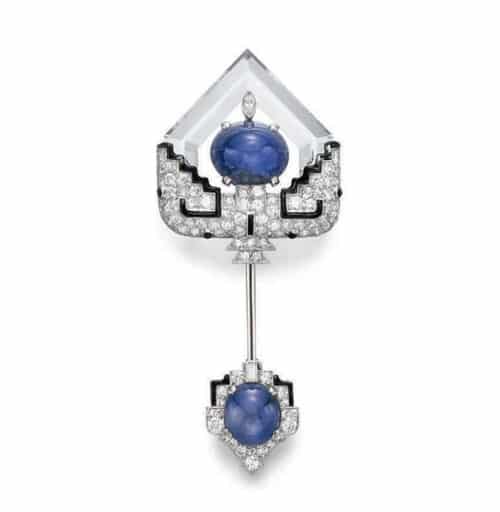 Raymond Yard began his career in the jewelry industry at the age of thirteen when he became a messenger boy at the well-established firm of Marcus & Co. in New York. Over the next twenty-four years, Yard firmly established himself with the company’s well-heeled clientele and received a thorough education in all aspects of the jewelry trade. He came to understand and value the highest standards of gem material and craftsmanship. In recognition of his jewelry acumen and integrity, his client, John D. Rockefeller, Jr. encouraged him to start his own firm. Raymond C. Yard Inc. opened its doors on Fifth Avenue in New York in 1922. 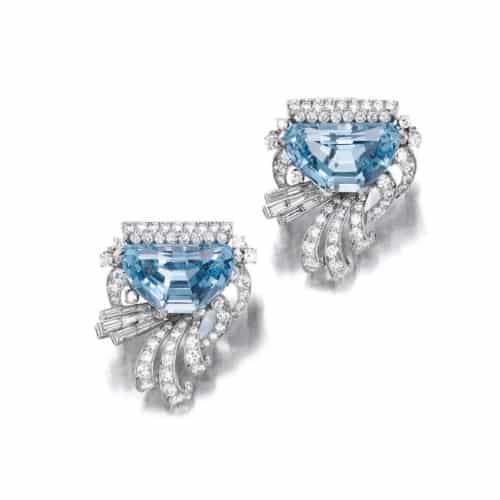 The firm of Raymond Yard catered to the wealthiest and most prominent of American families: the Rockefellers, Fleischmanns, Flaglers, and Woolworths, among others. The firm primarily focused on custom-made pieces for their clientele and was known for being able to source the highest caliber of material that their clientele demanded. Stock pieces were executed by trusted outside manufacturers with Yard supplying the stones and designs. His creations exemplified the understated elegance of impeccable workmanship combined with the very finest of materials. Raymond Yard prided himself on his knowledge of gems and was considered one of the foremost experts on pearls. Yard was responsible for convincing the preeminent Parisian gem dealer, Raphael Esmerian to permanently locate to New York.

A distinguishing design feature of Yard jewelry was the extensive use of mixed-cut and single-cut diamonds in his pieces. Yard aimed for an overall luminous elegance rather than a sharp brilliance; a look that did not overwhelm the design. Although he followed the design motifs of the time, this technique distinguished his style from that of other well-known jewelry firms such as Tiffany & Co. and Cartier.

Another characteristic that personified Raymond Yard was his generosity and his scrupulous dealings with his customers, employees, and suppliers. Attesting to this, he was honored on the tenth anniversary of his company by a gift of a large engraved clock given to him by seventy-three of his suppliers, manufacturers and gem dealers. The doors were inscribed: 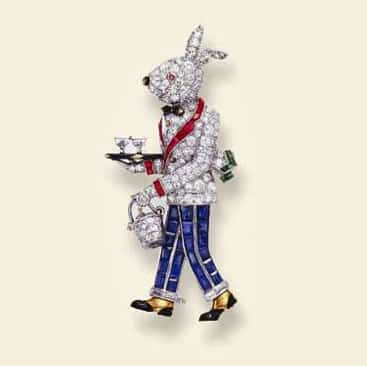 Yard is noted for two original stylistic designs: the iconic anthropomorphic rabbits and the house brooches that debuted in the late twenties and early thirties. Featuring pavéd diamonds, calibré-cut gems and accents of enamel, these whimsical pieces were as always, gorgeously executed. The delightful rabbit brooches were created in a number of different themes. Among them are brides, anglers, yachtsmen and British Royal Guards but the most famous of all are the rabbit waiters. Dressed in stylish formalwear, they carried trays of cocktails, along with buckets of ice and bottles of champagne. The waiters first appeared in early 1929, near the height of prohibition; a chic, elegant and playful gesture of protest.

The first house brooch was introduced in 1932 and by the 1960s, well to do clients were bringing in photographs of their homes to be turned into exquisite jeweled replicas. The most elaborate of these was an astonishing reproduction of Cee Zee Guest’s lavish Villa Artemis in Palm Beach.

In 1958, Raymond Yard retired, passing his company on to three of his long time employees: Glen McQuaker, Donald Bartow, and Robert Gibson. Both McQuaker and Gibson caddied for Yard and started their careers with him at the age of seventeen. While it no longer maintains a physical presence, the company is still extant. Drawing on their archives of iconic styles, the firm is still producing jewels and is currently run by Robert M Gibson, who took over from his father.

The first Yard brooches of the early Twenties reflected that era’s Art Deco aesthetic of circular and geometric bar designs before moving onto the popular style of separate dress clips which remained in vogue through the Nineteen-Thirties and into the early Forties. Their dress clips evolved from simple, monochromatic shield shapes with pave diamonds and a few fancy-cut diamonds into much bolder designs featuring strong color contrasts. A particular favorite of Yard were rubies standing out in bright relief to the surrounding diamonds as evidenced in many of the stock pieces of that time.

As the 1930s progressed into the 1940s, the prevailing design preference moved away from shield shapes into curvilinear designs with folds of ribbons and scrollwork. Dress clips were no longer ascendant and many more single brooches were being worn. Calibré-cut stones were less utilized in the newer curvilinear shapes particularly as precious stones were in sparse supply during the war years. This scarcity also manifested itself in inventive designs that now featured large areas of unembellished metal. The most marked change of these years however, was Yard’s extensive use of yellow gold and a new array of colored stones such as topaz, amethysts and moonstones. During this period, Yard’s attention shifted from the design influences of Cartier to the newly prominent firm of Van Cleef & Arpels. The most noticeable example of this was the small group of “Southern Belles” that were produced in direct reference to Van Cleef & Arpel’s iconic ballerina brooches. 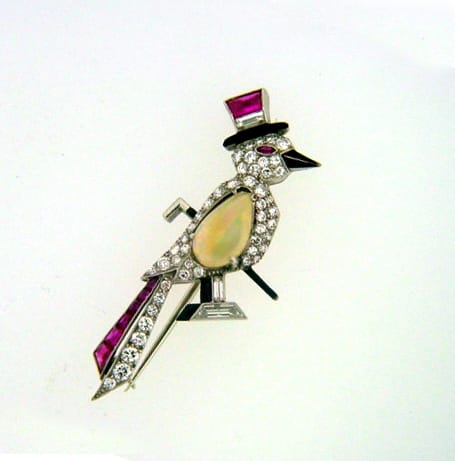 Throughout the 1950s and sixties, Yard created many brooches with a more naturalistic theme. Baskets of flowers, leaves, bees and bird brooches among others, abounded. On the other end of the design spectrum, stylized starburst forms were also popular, capturing a more modern abstract feel. Yellow gold continued in popularity and a greater emphasis on texture was evident. Present-day pieces harken back to the earlier, more classical design period including the iconic rabbits and house brooches. 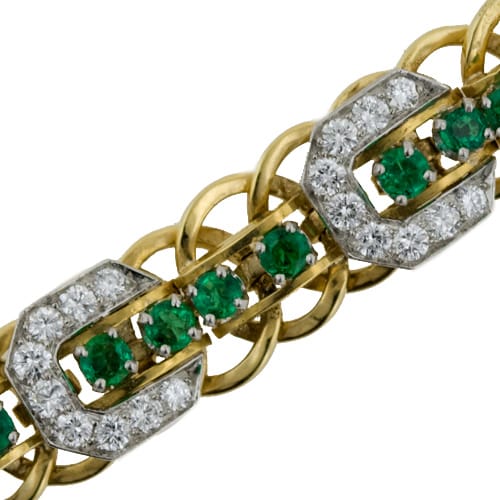 The first of the Yard bracelet designs were the classic straight-line bracelets of the Twenties. Manufactured in platinum with box set diamonds and calibré-cut colored stones, these developed into more intricate pieces with open links, more complex designs, and much wider styles. These more detailed pieces featured the classic Yard style of mixing various step and brilliant-cuts.

The limited supply of precious stones and the shift to yellow gold, as a result of World War II, led to an extensive use of less traditional stones such as moonstone, colored sapphires and amethysts. Moonstones accented by colored sapphires were particularly popular in a unique yellow gold Yard “buttercup” flower design, which centered a moonstone surrounded by smaller colored sapphires or rubies.

As was the style in the Twenties, the earliest Yard earrings were long drop pendant styles of platinum and diamonds often featuring a carved stone or pearl in the drop. In the early 1930s, the clip-on earring back was patented, opening up a new style of earring that primarily rested on the ear. Yard designed a distinctive ear-clip style that curved up the lobe. These “up-lobe” earrings quickly became Yard’s dominant style and were typically composed of a large colored stone surrounded by diamonds that curved up the contour of the ear. As with all other jewelry, World War II greatly changed the prevailing materials used in the fabrication of earrings. Yellow gold with a greater amount of exposed metal and a larger variety of stones was used and new styles such as the “buttercup” design, which was centered on the ear, as opposed to the up-lobe, became popular. 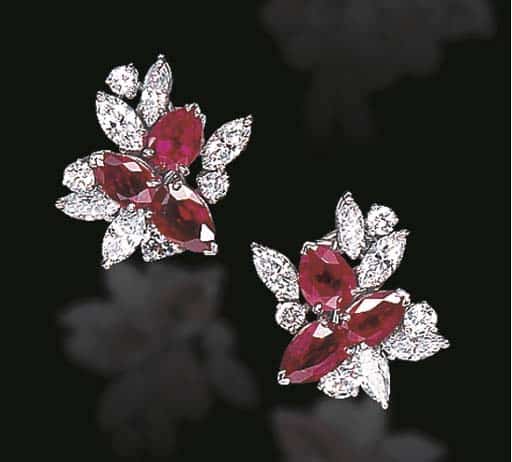 At the end of the war, short moonstone drop earrings executed in yellow gold emerged as well as another new, very popular clip model made of platinum with colored stones and diamonds. This style was designed as a bouquet of flowers oriented either upright or downwards, and typically set with rubies or sapphires.

As the 1950s arrived, many of the earrings Yard produced were of the popular snowflake design, centering a larger center stone encircled by stone accents. Many of these earrings looked like smaller versions of their brooches and often they could double as a pair of dress clips. The era also saw the continued modification of the “up-lobe” design that became more elaborate as a double-ribbon loop that extended both above and below the central stone. While most designs were executed in platinum, yellow gold ear clips continued to be made throughout this period with their diamonds mounted in platinum.

The 1960s and 1970s continued the design trends of the Fifties but with drop earrings making a larger comeback as well. Current day designs reflect a preference for the more elaborate drop earring designs of the Twenties. 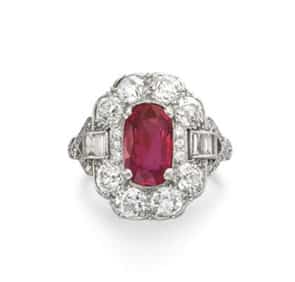 The Yard rings of the 1920s were made of beautifully engraved and pierced platinum surrounding a center stone set off by smaller round diamonds. By the end of that decade, however, this style changed substantially. Their signature look now featured a center stone with shoulders of clearly articulated step and round cut diamonds in a much more geometric and modern style. The predominant metal was platinum and the stones, as always, were impeccable. Cocktail rings were introduced in the 1930s and a simpler side mounting using bullet or baguette cut diamonds started to be manufactured.

During the war years of the Forties, palladium was substituted for platinum in many of their cocktail rings and Yard, as part of his war-time contribution, launched a line of relatively inexpensive diamond rings featuring a diamond center stone under a carat, with two small side diamond accents. Needless to say, these proved quite popular with the servicemen of the time. Yellow gold rings of the period featured a variety of large sized colored stones, including moonstone, citrine and amethysts set in bold, tailored settings. Joan Crawford’s step-cut amethyst ring of approximately seventy-five carats is a wonderful and famous example of this trend.

By the end of the Fifties, cluster rings were in vogue and by the 1960s, the most characteristic of Yard’s ring styles featured a center stone surrounded by either round or marquise cut diamonds. The cluster style continued in popularity throughout the Seventies with a greater emphasis on metalwork, such as in the use of wire shanks, being evident. Contemporary rings by Yard reference the firm’s earlier signature style of highlighting larger center stones with well-proportioned shoulders of step and mixed cut diamonds. 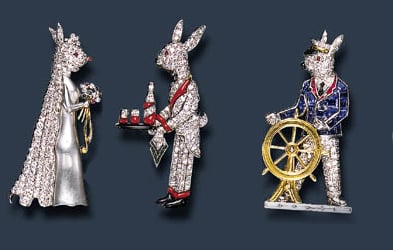