Glyptography is the art of gemstone carving and the term applies to both intaglios and cameos. Begun in ancient times, circa 15,000 B.C., as one of the earliest forms of communication, glyptography was also integral to the relatively recent late nineteenth and early twentieth-century process of creating reverse crystal intaglios, but with a twist. A reverse crystal intaglio is a rock crystal cabochon with an intaglio carved into the flat back (instead of the top as done previously.) The intaglio was also painted realistically with oils so, that when viewed through the top, the image appears three-dimensional. Finally, the back was sealed in order to preserve the painted areas. The technique originated in Belgium c. 1860 and is attributed to an artist named Emile Marius Pradier. It is notable to mention that collectors of Mr. Pradier’s work occasionally find his signature on his earliest creations. This technique was popularized in England by Thomas Cook who made crystals for Lambeth & Co. The popularity of the genre encouraged Mr. Cook to train an apprentice, Thomas Bean, to assist in the process. Bean’s son and grandson carried on the tradition of reverse crystal intaglio production keeping the secrets of this mysterious process all in the family.

Production of a reverse crystal intaglio begins with the mining and cutting of fine rock crystal from Brazil or Madagascar. A well-formed cabochon is the key to a beautifully made reverse intaglio and the tedious process of hand polishing it to perfection had to be completed before the design work could begin. A watercolor rendering of the image was painted on the underside of the cabochon and an oil and diamond dust mixture was used along with up to 250 scribing tools to carve the design into the interior of the crystal “…the deeper the carving the more pronounced trompe l’oeil effect.”1 Once the carving was established the painting process began with extremely fine brushes and paint working in reverse to create incredibly detailed images.

The motifs most commonly found for men were sporting themes – horses, dogs, foxes and birds and for women – monograms, birds, insects (especially popular at this time because of the association with the Bonapartes and their bee emblem,) butterflies and flowers. Reverse crystal intaglios were set as stickpins, buttons, and studs, mounted on tie pins, cuff links, lockets and charms. Occasionally back-to-back mounted crystals resulted in an orb-like crystal with the image apparently “floating” in its center. This relatively secret process, with its techniques passed through family members, kept it exclusive and expectations of quality were very high. They remained in fashion until poorly made glass and plastic imitations flooded the market c. 1920s. 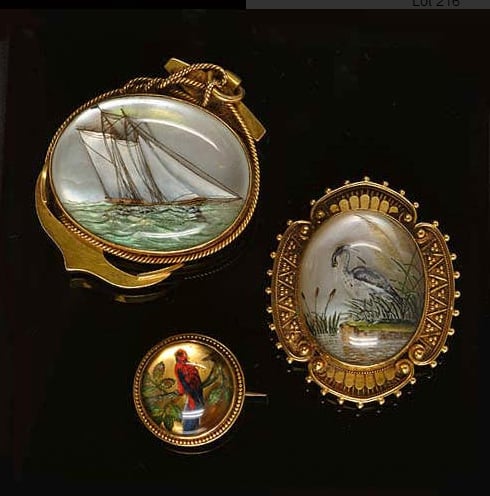 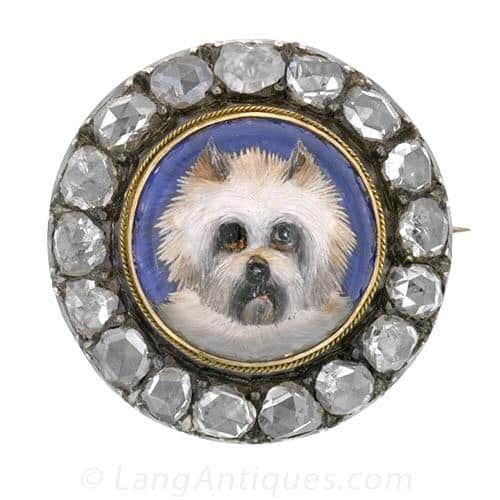 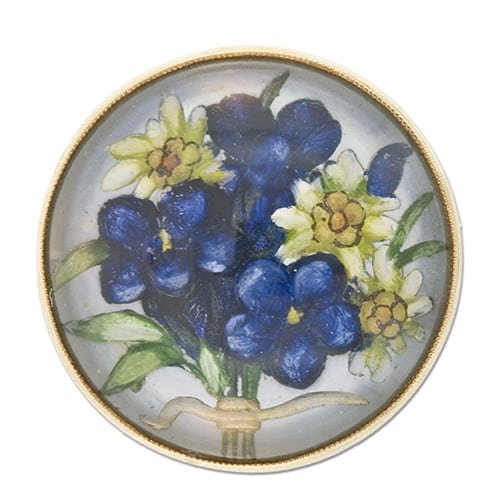 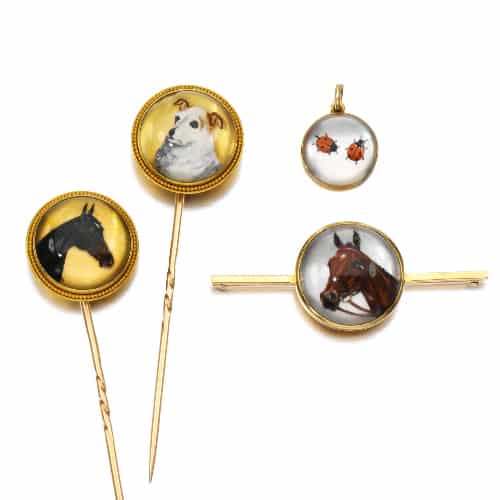 The ability to distinguish these fine crystals from those of lesser quality requires a trained eye and a magnification source such as a loupe. Checking from the side, you can observe the depth of the carving and the minute detail of the painting. The backing on the early crystals was gold foil, followed by etched mother-of-pearl and finally plain mother-of-pearl, this backing gives an indication of the crystal’s relative age. A well designed and executed crystal can be more valuable than the setting in which it is mounted.

An interesting aside is the erroneous attribution of reverse crystal intaglios to artist William Essex. Mr. Essex was a well-renowned enamel miniaturist and, somewhere along the line, his name became mistakenly associated with reverse crystals. The name “Essex crystals” became a commonly heard misnomer for these unique creations and the term continues to crop up even today. 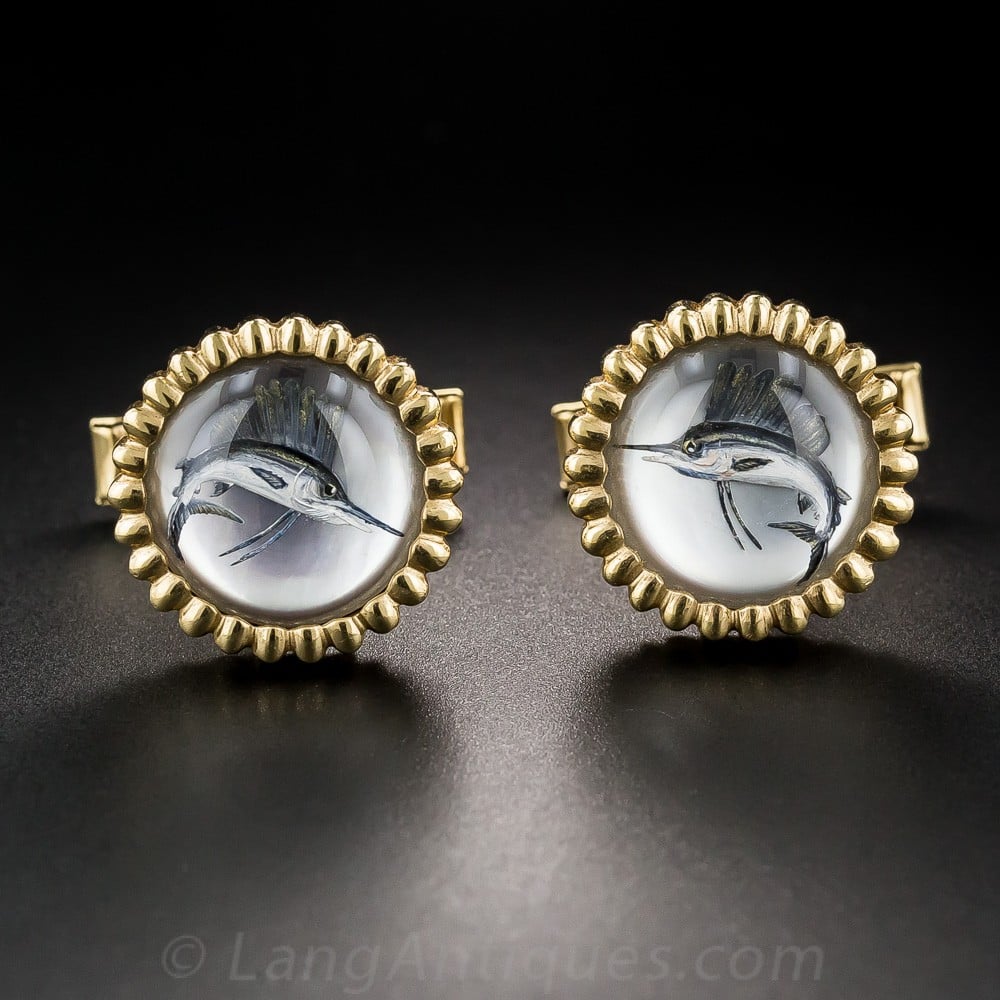 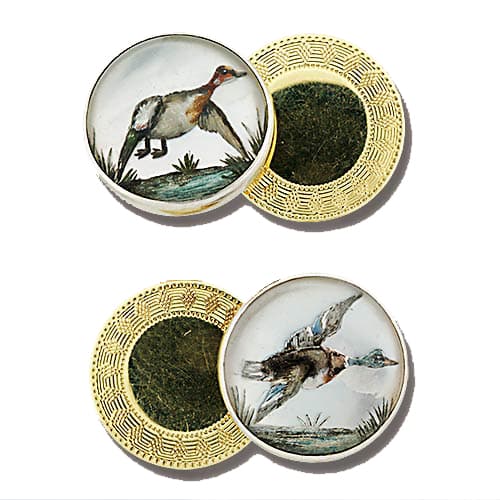 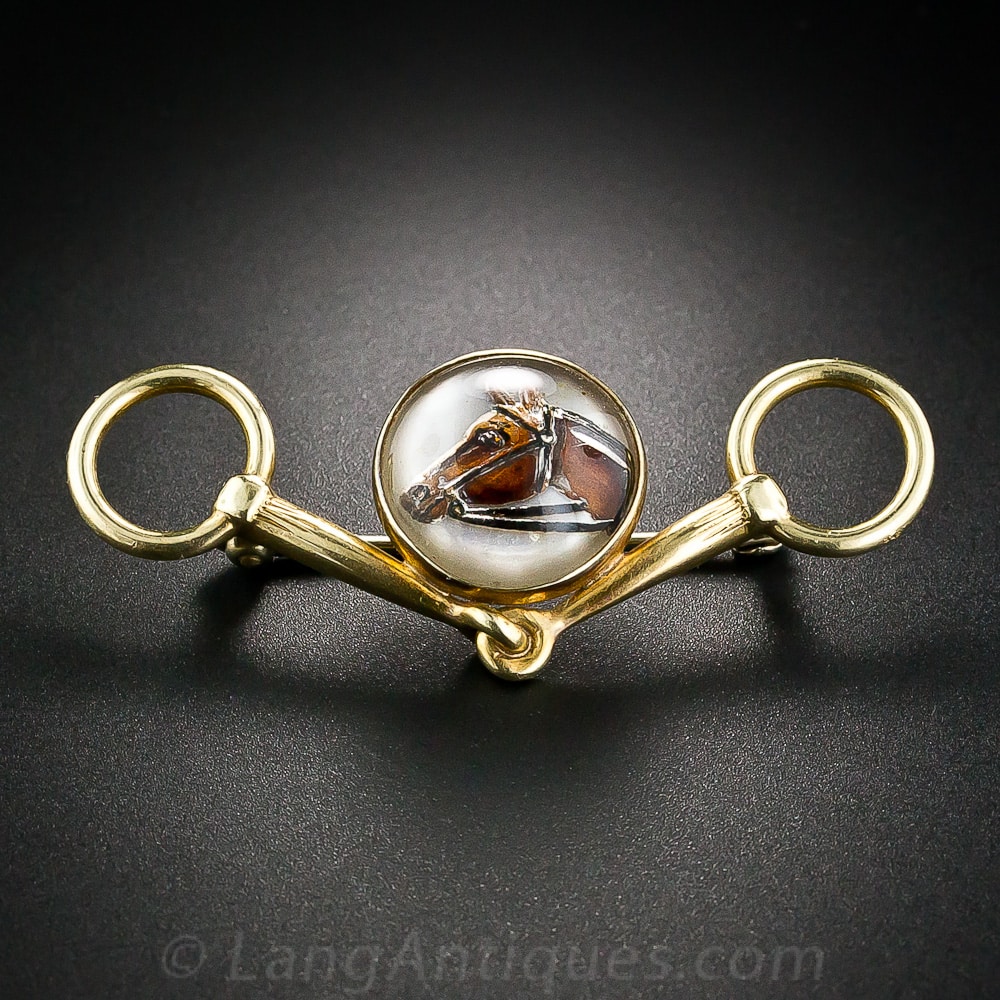