By any gemological standard, the Shah Jahan Table-Cut Diamond is one impressive stone. Like many of its contemporaries, this diamond has gone through periods of time when it has disappeared from public view leaving its owners unknown. Yet, this legendary stone’s distinction in gem history may not lie in how it stacks up against other diamonds with its size, color or all around beauty, but rather the unique way in which it was used by one of its owners. It is perhaps the only diamond that can lay claim to having a part in supporting a royal derriere – literally! But let’s begin the story, not at the… ah, end, but at the beginning. 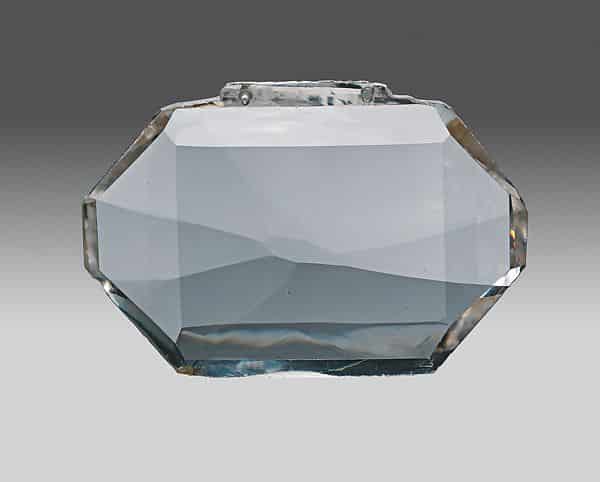 Records indicate the Shah Jahan Table-Cut diamond dates back to the Classic Period of the Mogul Empire (1556-1707). The many fine diamonds worn and exhibited during this time period were probably assembled from the Tribute collected from the Qutb Shahi Sultans of Golconda. It was also during this time that the empire reached its zenith, enjoying its status as one of the richest regions in the world with major advancements in architecture, literature, and art. The first of the emperors ruling during this era of enlightenment was Emperor Jalal-ud-deen Muhammad Akbar, who ascended to the throne in 1556. Succeeded in 1605 by Nur-ud-deen Salim Jehangir, he was followed twenty-three years later by Shihab-ud-deen Muhammad Shah Jehan, and lastly by his son, Muhi-ud-deen Muhammed Aurangzeb, in 1658.

Shah Jahan appears to have had a weakness for showmanship for he was responsible for creating and building some truly impressive images. Perhaps his most famous creation is the renowned Taj Majal. This majestic building was erected as a mausoleum for his beloved wife and became his tomb as well. As a result of his reputation of doing everything on a grand scale, Shah Jahan needed an equally impressive chair from which to rule. So he created what will undoubtedly go down in history as the most spectacular – if not gaudy – throne ever made. Known as the Peacock Throne, this amazing piece of royal furniture used practically all the gems of the royal treasury. It must have been quite an intimidating sight watching the Shah receive visitors and do the empire’s business while literally sitting on part of his… impressive treasury.

Then again, perhaps the Shah Jahan Table-Cut diamond was spared the throne. This particular stone is a very distinctive 56.71 carats, octagonal, light pink and table-cut diamond. Hanging in the Victoria and Albert Hall Museum in London is a portrait of Shah Jahan painted by Nadir uz-Zaman. Rendered in 1616-17, this painting depicts him holding a sarpech (turban ornament) set with precious stones. Upon closer examination, one of the stones in the ornament bears a striking resemblance to the Shah Jahan Table-Cut diamond. Artists of that time period were trusted by the leaders of the Mogul Empire and were able to study the gemstones closely before depicting them in portraits; therefore this rendering is probably quite accurate. In addition, drill holes in the diamond would indicate the likelihood that it was worn on a turban or other garment.

Shah Jahan was set aside (a polite way of saying relieved of his duties) in 1657, allowing his son Aurangzeb to take the throne. Visiting the court of Aurangzeb in 1665, Jean Baptiste Tavernier was shown some of the court jewels. After he viewed the Great Mogul diamond he was shown:

…another diamond of pear shape of very good form and fine water, with three other diamonds, table-shaped, two of them clean and the third with some little black specks. Each weighs fifty-five to sixty ratis, and the pear sixty-two and a half.1

The Shah Jahan Table-Cut diamond is probably one of the table-cut diamonds described by Tavernier.

When the Persians sacked Delhi in 1739, among the many treasures they carried away was the Shah Jahan Table-Cut diamond. It may not have been in Persian hands long for, in 1741, rumor has it that when Nadir Shah sent gifts to the Empress of Russia, the Shah Jahan Table-Cut diamond was included as one of the presents. However, since the diamond never made an appearance as a Crown Jewel at the Russian Court, it leaves us to question its whereabouts at this point. Still, it’s possible the Empress did receive the diamond and just decided to offer it as a political gift to another party before it could be inventoried by the royal treasury. The fact that later in its history there are two stories linking the Shah Jahan Table-Cut diamond to Russian owners makes this theory plausible.

In 1984 The Journal of Gemology featured a description of the Shah Jahan Table-Cut written by Mr. E.A. Jobbins and Dr. R.R. Harding. They felt that the stone might be given a color grade of fancy light pink. There were earlier drill holes that were ground away but left evidence of their having existed along the edge of the stone. No major inclusions were noted except some iron oxide staining near one corner. Traces of cleavage were also described.

In May of 1985, an “historic” diamond weighing 56.71 carats, measuring 44.6 x 33 x 3.6 mm with an octagonal outline went up for auction at Christie’s Geneva. The stone, bearing a strong resemblance to the Shah Jahan Table-Cut diamond, did not sell. The consignor was a man claiming that the stone had been in his family since the 1890’s. The diamond has not made a public appearance since that auction.