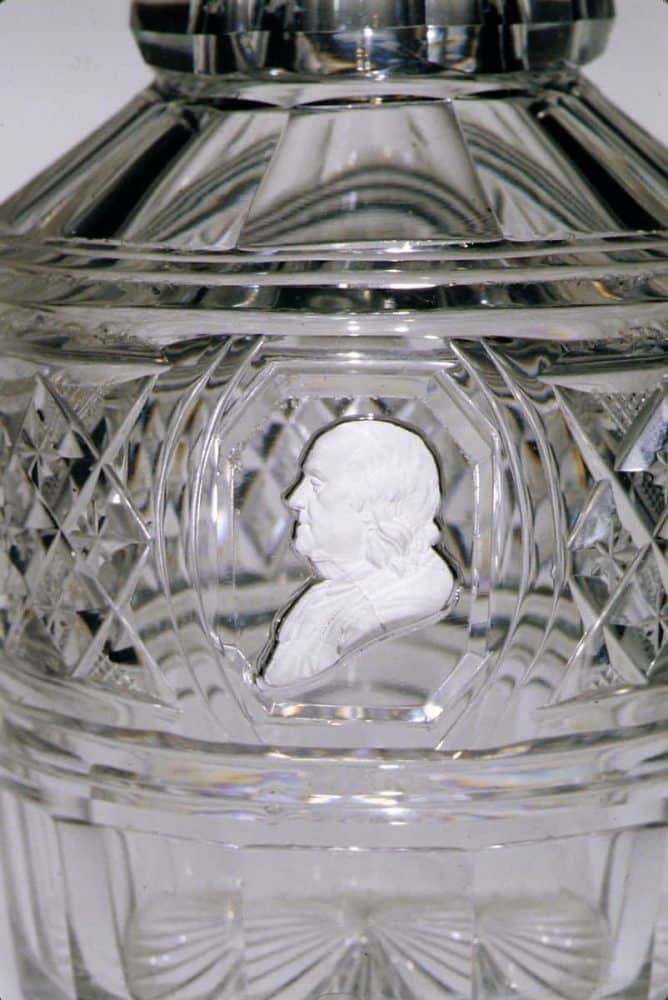 Sulphide Portrait of Benjamin Franklin.
Photo Courtesy of the Metropolitan Museum of Art.

Sulphides, medallions encased in glass, were developed and patented c. 1819 by Apsley Pellatt IV (1791-1863) . Joining his father’s firm Falcon Glassworks, Blackfriars, London (aka Pellatt and Green and Apsley Pellatt & Co.) c.1811 and wishing to make aesthetic improvements to the art of glass making, Pellatt began to experiment with a process of encasing a ceramic medallion completely in glass, which he termed crystallo ceramie. Later he coined the terms “Cameo Incrustation” and “Sulphides” to describe his process. An experimental glassworks set up to work with optical glass provided Pellatt with the opportunity to work on his offshoot of the company’s traditional cut crystal glass manufacturing. Pellatt applied his process for producing cameo incrustations to all manner of items in daily use, such as decanters, paperweights, jugs, etc. and, somewhat rarely, jewelry. While these items were not the focus of the company, they are the most collectible of what remains extant. Pellatt eventually switched to the process of engraved glass. The company went to his brother upon his death in 1863 and from there into obscurity in the late nineteenth-century.

These sulphides are sometimes mistaken for Reverse Crystal Intaglios but are easily distinguished by their absence of color (except c.1920s when backing them with butterfly wings was all the rage) and distinct lack of fine details (not to mention the material used is glass and ceramic, not rock crystal.) Another common source of a mix-up is Camphor Glass, which is an acid-treated glass carving. Camphor Glass has a distinct matte finish and the carvings are geometric, often in ray form.