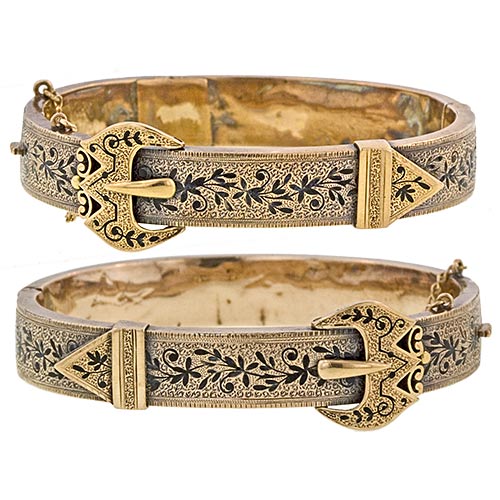 Taille d’épargne, sometimes referred to as black enamel tracery, translates from the French literally as “saving cut.” It is a variation of champlevé whereby engraved lines forming a design are incised into the metal and are filled with opaque enamel– usually black – like basse taille enameling but without the subtle depth variations. This technique was often used to decorate bracelets, watch cases, chatelaines and mourning jewelry. Taille d’épargne remained in vogue through the mid-1850s when it was mass produced by the Birmingham firms. The Birmingham style was imitated in the United States c.1860, but American taille d’épargne was employed on burnished or bloomed gold to highlight engraving. By the 1870s fashion turned to translucent enamel over engine-turned patterns (guilloche enamel.)