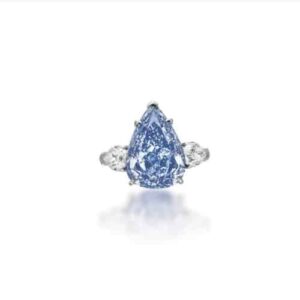 From Christies’s: THE BLUE ( Sold 4/1/4/14 $24,249,680) The fancy vivid blue pear-shaped diamond, weighing approximately 13.22 carats, flanked on either side by a pear-shaped diamond, weighing approximately 1.00 and 0.96 carat, in blue leather fitted case Accompanied by report no. 17490678 dated 25 March 2014 from the GIA Gemological Institute of America stating that the diamond is Fancy Vivid Blue colour, Flawless clarity, a Diamond Type Classification letter stating that the diamond is Type IIb, and a letter indicating that the diamond ‘ is the largest Flawless, Fancy Vivid Blue, Natural Color, diamond (…) graded as of the date of this letter’