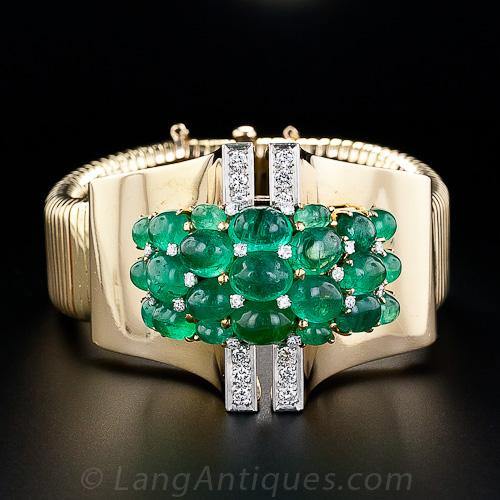 On the heels of the famous 1925 L’Exposition Internationale des Arts Décoratifs et Industriels Modernes in Paris, American fashion was still firmly adhering to the French aesthetic. American jewelers did not participate in the exposition but they attended in droves to see for themselves the new modern look, absorbing design ideas so they could create their own version of “French” jewelry at home. A small subset of the French exhibit appeared on American soil at the Museum of Fine Arts, Boston and traveled to other major cities giving the hometown crowds their first look at Art Deco.

American designers and manufacturers began to interpret the look for modern Americans but it took some time and good old American marketing ingenuity to gain a foothold for the look in the U.S. 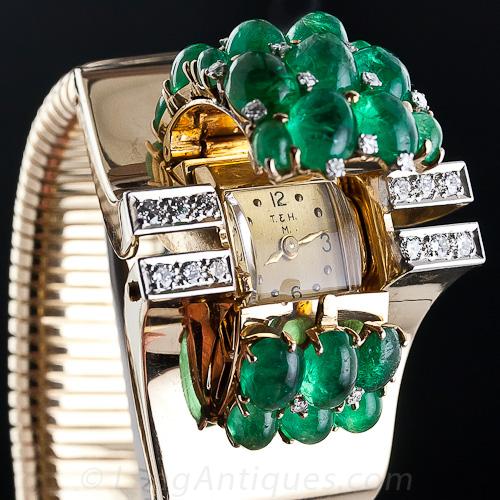 Upon Closer Examination…
It’s a Watch!

Randolph J. Trabert and William Howard Hoeffer, having both learned the jewelry and gem businesses with established jewelry firms, joined together to form Trabert & Hoeffer, Inc. in 1926. In the beginning, they imported designs from France (as did most major American jewelry houses) and they also copied French styling. Working to establish themselves with the old guard in Paris and the already successful jewelry houses in the United States, Trabert & Hoeffer took their cues from the likes of Tiffany, Mauboussin, Cartier, and others. One of the more fortuitous ploys used to develop their name and reputation was the purchase of historic jewels of royal provenance. A successful marketing campaign that served them well included the display of these jewels in their stores and at various exhibitions where they were positioned to attract positive attention for the budding firm. Their rise was meteoric until the infamous stock market crash in 1929, followed closely by the death of Randolph Trabert in 1930.

Nothing fueled the redesigning of America in a more “modern” image than the Great Depression. While the government was employing thousands of individuals to bring to life the vision of the “New Deal” private manufacturers were working to create products that were stylish, functional and locally produced in a cost-effective manner. Modern and moderately priced products flooded the stores in an attempt to lure those consumers with discretionary income back to the marketplace. Jewelers were no exception, innovative materials such as Bakelite were used by fashion jewelry designers to bring both whimsy and economy to the costume jewelry market. Marketing was another key to reinvigorating American consumers and Hoeffer saw an opportunity to gain wide exposure for his jewelry designs by lending them for use in the Hollywood productions so important to lifting the spirits of the nation. Modern design was already an established component in films and what better place to feature the latest in contemporary jewelry than on the silver screen. Other marketing strategies for Trabert & Hoeffer included creating an ultra sleek Park Avenue headquarters and expanding operations to the locations where potential clients of means went to relax. Palm Beach, Los Angeles, Atlantic City were the first branches opened followed by Miami Beach, Chicago, and Beverly Hills.

The Parisian jewelry House, Mauboussin (established in 1827,) made some unlucky initial forays into the American market, opening on Park Avenue c.1924. Mauboussin expanded, adding a Palm Beach location along with ultra-modern headquarters on East 15st Street in New York, all timed perfectly to coincide with the 1929 stock market crash. Having imported vast quantities of jewelry and gems from France hoping to capture the American market for French jewelry, by 1935 serious financial trouble made it necessary for them to sell off their stock. Struggling to correct massive financial woes, Mauboussin entered into a collaboration with Trabert & Hoeffer, keeping the Mauboussin name alive and adding a dash of panache to the reputation of Trabert & Hoeffer. 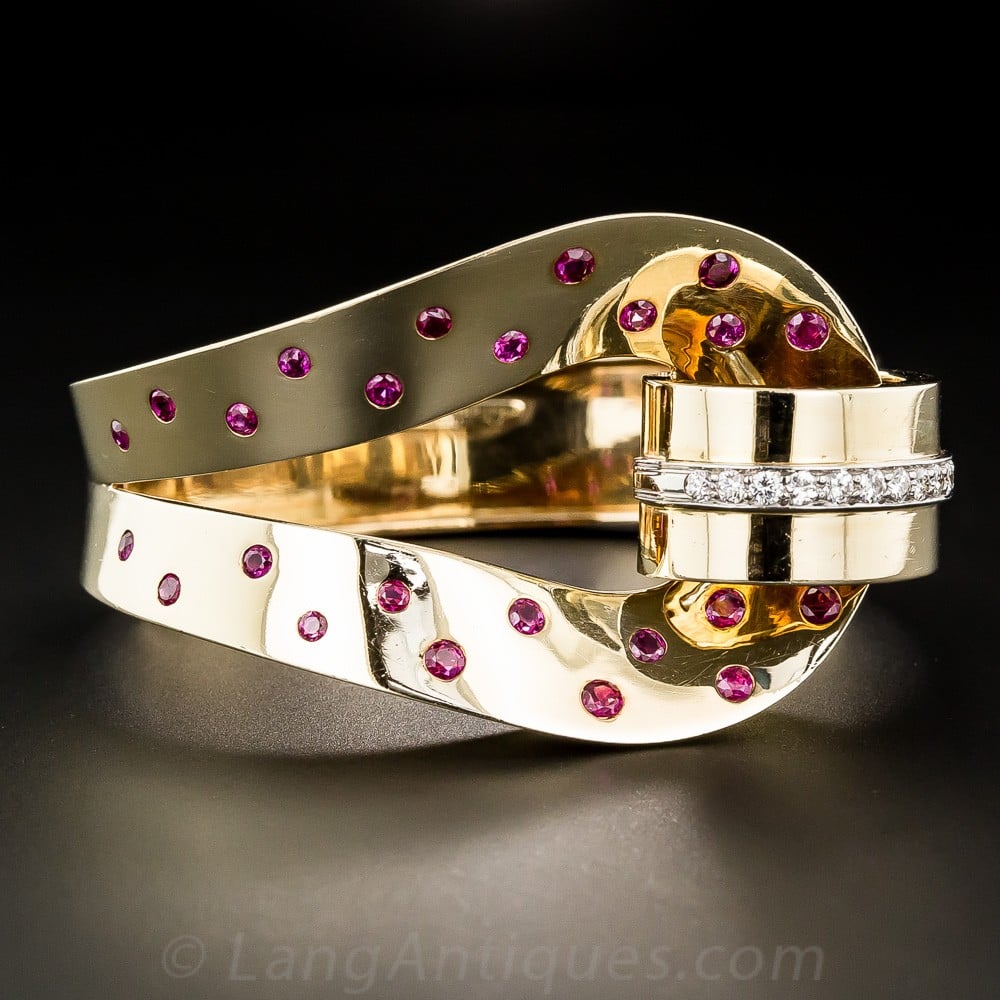 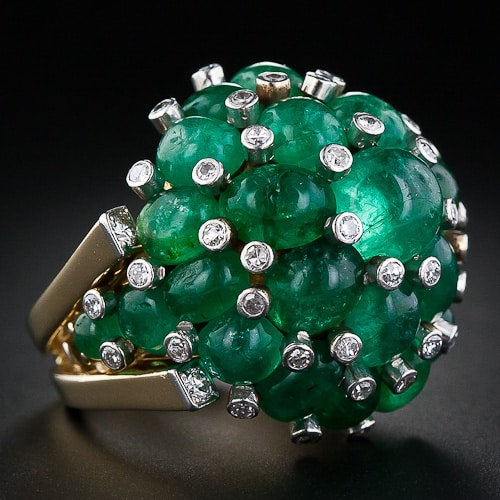 In 1938, with what in hindsight looks like an amazing stroke of foresight, Hoeffer developed a more affordable (but still at the forefront of high style) line of jewelry called Reflection. Designed by Gustave Toth, Reflection jewels were artfully assembled from an assortment of pre-cast design elements. Selection and arrangement of these elements, including letters of the alphabet, could be facilitated by the client making them feel like an important part of the design team for their “custom” jewel. Gold was again the metal of choice for jewelry and the elements were produced in various gold colors for a truly modern look. Chunky colored gemstones, often cut en cabochon, completed the look. Many of these pieces were able to be taken apart and reassembled into a different looking piece making the jewel truly convertible. In fact, Trabert & Hoeffer was known for their innovative designs that allowed a necklace to convert into bracelets, brooches, clips and earrings, a brooch that could clip onto a bracelet for an entirely new look and clips that could be worn as earrings giving the consumer a myriad of fashion choices in one piece.

When World War II crippled the jewelry industry’s access to platinum and precious gems and the U.S. imposed a luxury tax on jewelry and other items, many jewelers were unable to keep their doors open. The Army took over the hotels where Trabert & Hoeffer-Mauboussin had retail outlets – Atlantic City, Miami Beach, and Palm Beach. The Reflection line which used advanced manufacturing techniques to keep costs down maintained its successful run during this time along with the smaller zodiac and novelty jewelry. Redesign and re-use of customers gems and precious metals into sleek modern jewels was another way Trabert & Hoeffer-Mauboussin remained viable through the war years. When their French counterparts were closed by the Nazi occupation, Mauboussin was able to continue their operations in the U.S. and eventually return to their former glory. Their association with Trabert & Hoeffer ended in 1953. 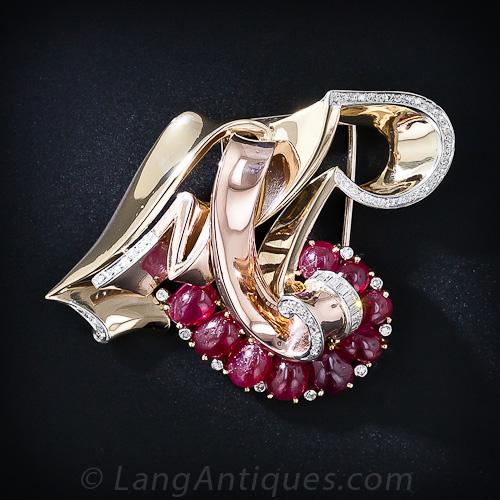 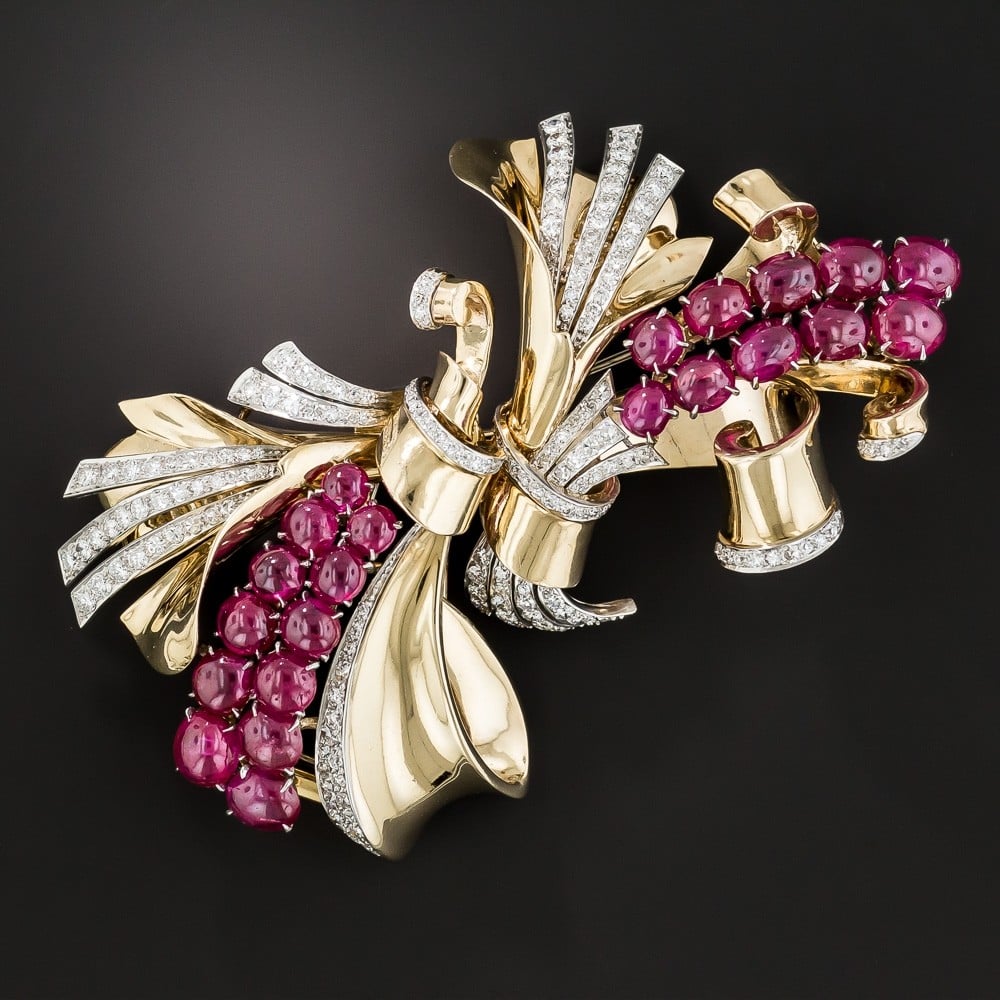 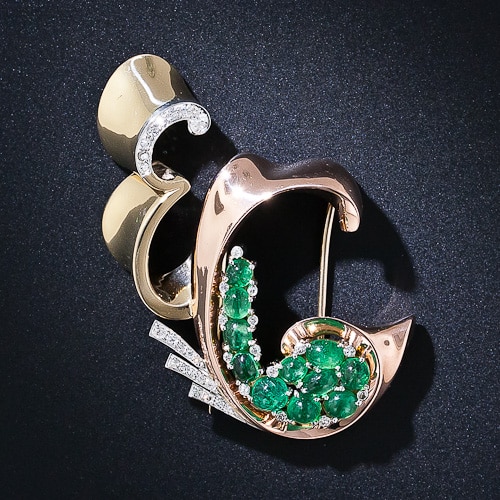 Hoeffer began to divest himself of the jewelry business, losing interest in keeping up with the changing styles, and in 1951, he transferred his stock to other members of the firm. The Palm Beach store closed in 1949 and the Miami Beach location remained open until 1966 under the guidance of Alan Cutler. Cutler, Trabert & Hoeffer had a retail presence until 1988. The New York location was sold but remained open until 1971. Hoeffer retired officially in 1956 and died in 1968. 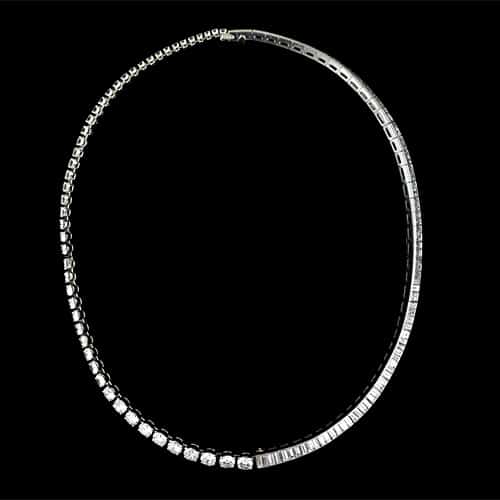