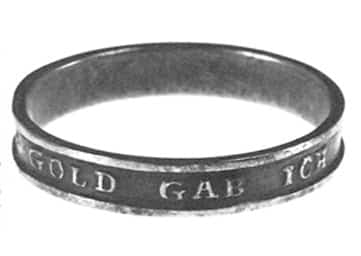 Fer de Berlin (from French: “Berlin iron”) jewelry came into fashion during the early 1800’s when the Prussians needed to finance the war against Napoleon. Citizens (especially the upper classes) were asked to turn in their valuable precious metal jewelry in order to fund the military troops. They were rewarded with iron jewelry, often inscribed with “Ich gab Gold fur Eisen” (I gave gold for iron). Berlin iron was sand-cast and then lacquered black. Berlin iron jewelry at first followed the Neoclassical style but by the 1830’s the Gothic revival changed the appearance of the iron jewelry. Berlin iron items are extremely rare nowadays and it is the Neo Gothic pieces that are sought after most.