Gemstone surface treatments are techniques that are applied to the surface of gemstones and diamonds in order to enhance the beauty of the stones. Typical enhancements include foiling, tinting, waxing, and mirroring. Usually, these techniques are subject to wear and tear and good care should be taken not to expose jewelry with such gemstones to conditions that may lead to the ruin of the treatment.

In days gone by, our ancestors needed to work with what they had and employ great skill to transform otherwise not so desirable gemstones into beautiful jewelry fit for Kings and Popes. This once common practice came to a halt at the dawn of the 20th century. Most jewelry that is offered today which has undergone one of these treatments (in particular foiling) dates from the late Georgian and Victorian era. Due to the discovery of diamond mines in South-Africa in the late 1800’s, larger and better quality diamonds became available and this, in combination with new cutting techniques and better knowledge of the optical properties of gemstones, meant there was hardly any need for such surface treatments anymore.

The beauty of a gemstone is perceived by the wearer mostly from the quality and quantity of the light returned from the gem to the eye. Modern cutters make use of an optical phenomenon called total internal reflection to let as much light as possible that enters the stone to be redirected back to the eye. During the path the light travels, some of the light is absorbed by the stone, the light that is not absorbed gives the stone its color. The gemstone cutter must have specific knowledge of the optical properties of the gemstone at hand. The yield a cutter can get from a rough mineral to cut a gemstone in such a fashion is typically less than 50%.

Earlier lapidaries were not in such a position of luxury nor did they have the modern gemological knowledge that cutters possess today. High-end gemstones were scarce and the top quality stones were only available to deep-pocketed individuals. Matching pairs of gems were impossible to obtain, let alone a series of matching stones when a jewelry item with many stones had to be manufactured. In order for the goldsmith to create a jewel with gemstones of some uniformity of color, other methods needed to be applied. Foiling a gemstone was one of those techniques and the goldsmiths who best employed this art were in high regard, not only did the process involve good craftsmanship but extraordinary artistic skills as well.

Now to return to that big diamond, a notable example of its kind, that I set for Pope Paul, and which I had only to tint, because the setting was already made. As I told you, I had asked Rafaello, Guasparri and Gaio to allow me some two day’s space; during this time I made a set of experiments in tints, and by great labor produced a composition which made a much finer effect beneath the diamond than had been made by the master, Miliano Targghetta. And when I made sure that I had beaten so admirable man, what did I do but set to work anew with still greater energy to see if I could not beat even myself.1

The passage above provides an insight into the prestige involved in enhancing the beauty of diamonds during the Renaissance Era. It was not to commit fraud, it was done to bring out the best; an expert’s job which takes time, effort, and great skill. Currently, such treatments would raise eyebrows, due to our conception of what ethical and what is not. Today Signity, a subsidiary of Swarovski, manufactures beautiful en cabochon cut gemstones with a metallic back foil and fully discloses it. As long as there is full disclosure, as it was prior to the 20th century, the enhancement is perfectly acceptable and of great interest to jewelry historians.

At the end of the 19th century Max Bauer wrote the following on the tinting of diamonds:

The possibility of temporarily masking the color of yellow diamonds has, in recent years, frequently let to fraud.2

This clearly expresses the sentiment of the day regarding the surface enhancement of diamonds, a sentiment still shared by many today. This is the opposite of how this was looked upon some 400 years earlier. By the 1920’s this practice had almost completely disappeared and only a small portion of goldsmiths have the knowledge required when repairs are needed. 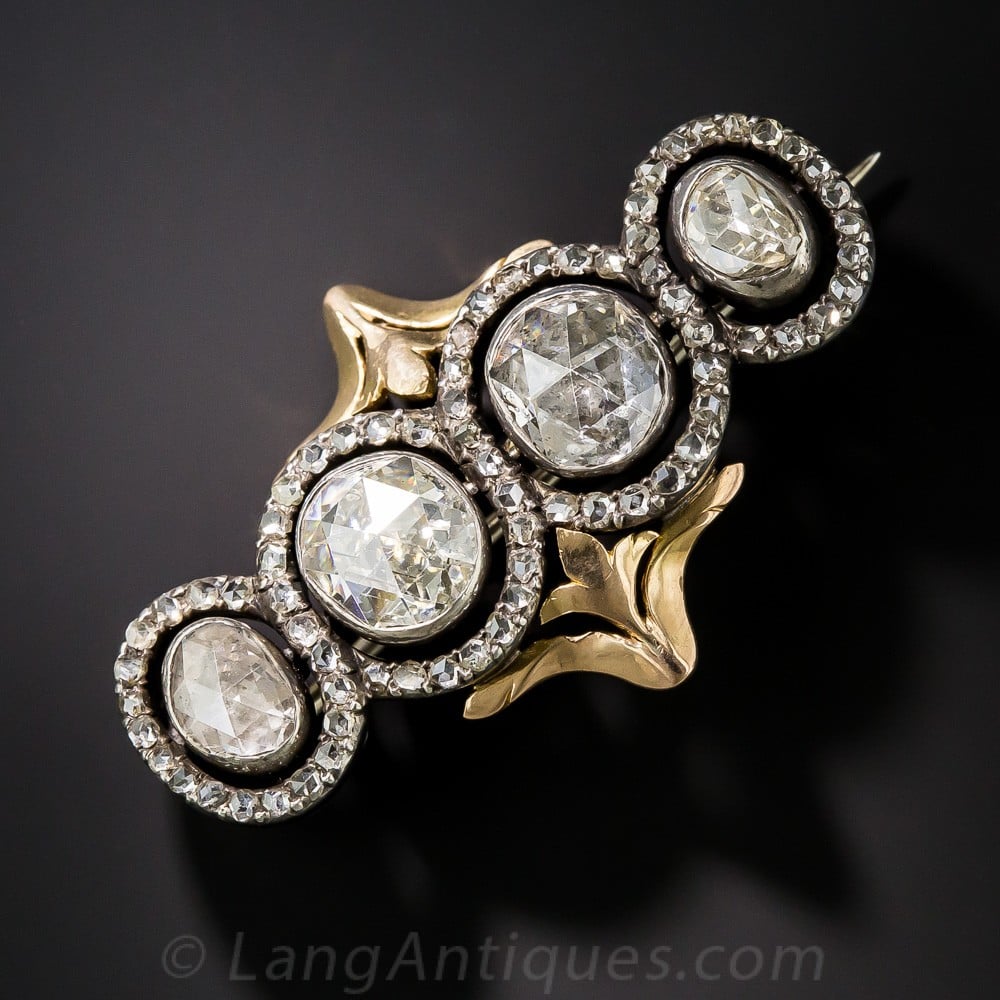 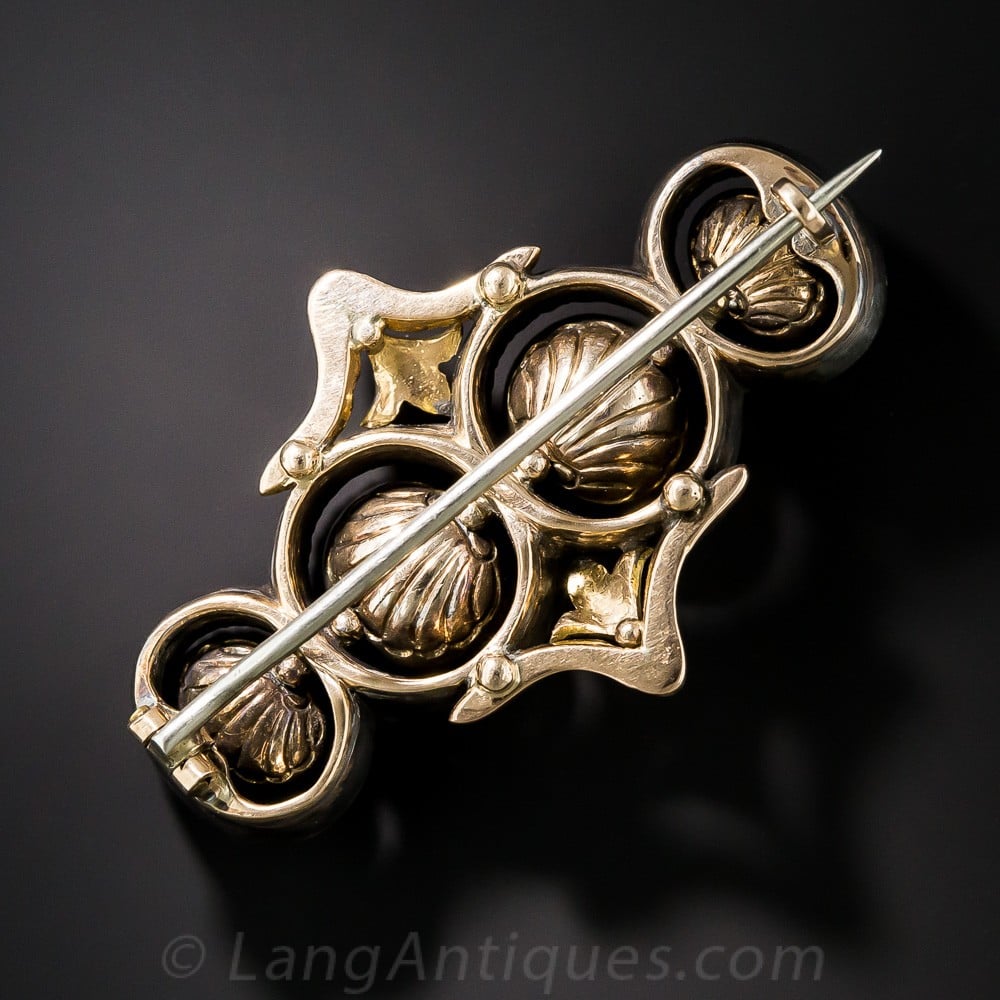 Foiling is the backing of a gemstone with a metallic or non-metallic sheet to improve its optical performance. The foil acts both a reflector as well as a coloring agent. Many jewels that survived had diamonds and gemstones that were treated in this manner. Almost always these stones were set in silver closed backs to shield the foil from deteriorating.

Of all the surface enhancements, foiling is probably the technique that has the most allure but it is hardly used any longer. Currently, the technique is frowned upon as we are not accustomed to such treatments, and with an abundance of good quality diamonds and colored gemstones available at relatively affordable prices, there is little need for a gemstone to be treated in this manner.

As mentioned earlier, the goal of foiling is to bring out the best in a gemstone. While modern knowledge can make use of mathematics to estimate the best performance, in ancient times our ancestors needed to resort to other methods: back foiling a gemstone with a colored and reflective sheet of metal greatly increases the optical performance of the gemstone at hand. 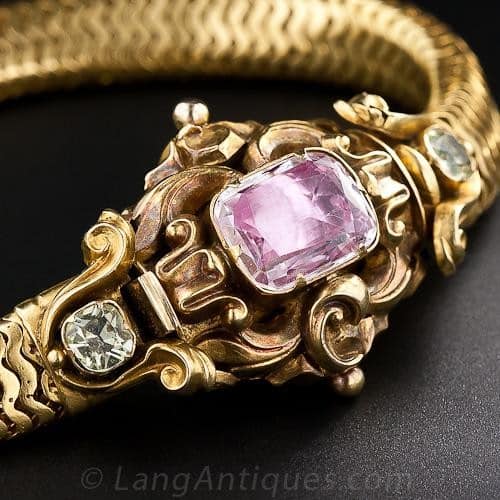 The back foiling of gemstones is a practice that dates back to at least Minoan times (2000-1600 BC)3 and early written accounts of it are given by Pliny4 in the 1st century AD. In 1568 Cellini gave a technical outline on this method with recipes on how to create several foils, but the most interesting information is probably given at the end of the chapter;

In the middle of the morse I set a diamond the facets of which were cut starwise to a point, for which Pope Julius II had given 36,000 ducats of the Camera. I set the stone quite free (a jour) between four claws, in this manner did it seem to me to make better. I had given this setting a good deal of thought, but the stone was of such exceptional beauty that it caused me much less trouble than costly stones of similar character are wont to do. True, some jewellers were of mind that it would better to tint the whole base of the stone and the back facets, but with my good results I got them to see it was much better thus.5

From the text, it can be concluded that foiling was not only done on rose cut diamonds but on early diamond cuts with a pavilion as well (although in this particular case Cellini went against the advice of other goldsmiths and did not enhance the stone at all).

Although the high end jewelers of days gone by used foiling to enhance the beauty of a gemstone, less scrupulous men (hardly ever women) applied the technique to gemstones of inferior value to mimic other gemstones and thus committing fraud. The 1974 edition of Shipley’s dictionary of gems and gemology6 puts foiled gemstones in three categories:

It is mainly due to the widespread practice of the latter two that we now, sadly enough, regard foiling as fraudulent.

Besides, colored, metallic foils, other foils were applied to enhance a gemstone:

The tinting of a gemstone refers to a surface enhancement in which a pigment was applied to the pavilion of a gemstone or in the setting. The main goal was, as with foiling, to improve the color of a gemstone. Contrary to foiling, tinting does not alter the brilliance of a gemstone (or diamond). While foiling has never been considered fraudulent, tinting any gemstone other than a diamond was a “faux pas”. Only diamonds were eligible to this treatment.7

Although it was not until Newton constructed his color wheel to explain the theory of additive color mixing, the concept of complementary colors was perfectly understood by artists prior to the 17th century. Complementary colors are two colors that are at opposite ends of the color wheel and together they will look colorless. When a yellowish diamond is tinted with a purple pigment, it will look whiter than the original yellow.8 This concept was exploited throughout the ages to enhance the color of diamonds.

The exact reason why only diamonds could be treated with tints is not very well documented but Cellini gives several clues to this. Tinting does not work very well on most (near) colorless stones but it does on diamond, topaz 9 and colorless sapphire. Many topaz and sapphire were heat-treated to become colorless and applying the tinting technique could lead to fraudulent acts. Punishments could have prevented potential frauds but the need for such legislation tells us that it must have been done at some time.

An interesting way of applying this technique is conveyed through Bauer in 1896 and is termed mounting on moor.

A black pigment made by mixing burnt ivory and mastic is applied to those parts of the closed setting over which the lighter portions of the stone will rest. The stone, when set, will then appear to be uniformly colored, the patchiness being effectively concealed.”

When this is applied to a cluster of diamonds with various dark inclusions, all diamonds will appear to be of uniform color and the total image will have a greater appeal.

Although the tinting was prohibited on colored gemstones, it was (and is) nevertheless done. Any gem trader will tell you that you should never judge the color of a ruby while it is presented on a copper disk or wrapped in a yellow paper. The yellow will bring out the best in the red ruby and those circumstances will be hard to reproduce when setting the stone.

Benvenuto Cellini once stumped three jewelers of high regard by waxing a diamond,10 the result being the best they ever saw. Waxing a diamond is akin to rubbing a salivated thumb over a frosted surface, the surface will become more transparent. In a time prior to the advent of high-speed lapidary discs to give a high polish to a gem, one could expect this technique to work.

Another technique that could add to the brilliance of a diamond is by placing a small piece of a colorless mineral in the bezel. The mineral will act as a mirror and reflect more light back into the stone.

Coating gemstones goes a long way back but when sputter-coated diamonds entered the market in the early 1950s a new kind of challenge was brought to gemologists. Finding its origin in research done over the Second World War, the coatings were originally intended for things like lenses in binoculars, survey equipment, and so forth. A 1949 patent mentions the first application for gemstones. During the 1950s the labs started seeing coated goods. It was taken so seriously that in 1962 a law was passed in New York State making the selling of coated diamonds without disclosure a criminal offense.

Currently, there is a new kid on the block: CVD (chemical vapor deposition) of synthetic diamond. Keep an eye on the development of this one since it’s a tricky one that will cause us a lot of headaches!