John Brogden was an English goldsmith known for his ancient, Egyptian, and Renaissance revival designs. Brodgen worked in the Covent Garden area of London, first as Brogden and Garland (1826 to 1835). From 1842 to 1864 the firm at that address was listed as Watherston and Brogden and from 1864 to 1880 the location became Brogden’s alone. Circa 1881 to 1885 the Grand Hotel in Charing Cross has him listed as an art goldsmith.

London and Paris exhibitions in 1851, 1862, 1867 and 1878 list Brogden as an exhibitor. In 1867 Brogden, at the Paris International Exhibition, won a gold medal for his jewelry. Along with the firm Giuliano, he produced some of England’s best examples of revival-style jewellery. Brogden was noted for his superior granulation and filigree work along with outstanding technical skills. Even his contemporaries, including Castellani, praised his work at the 1878 International Exhibition in Paris.1 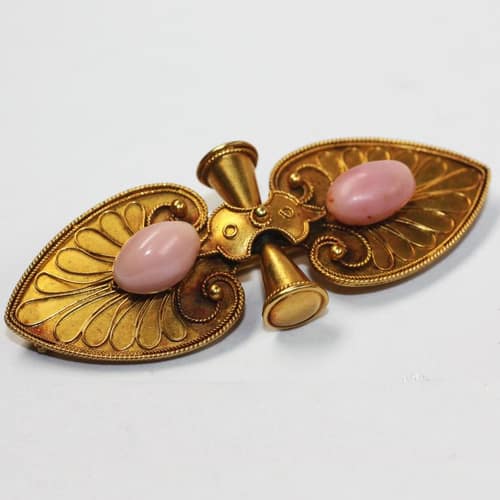