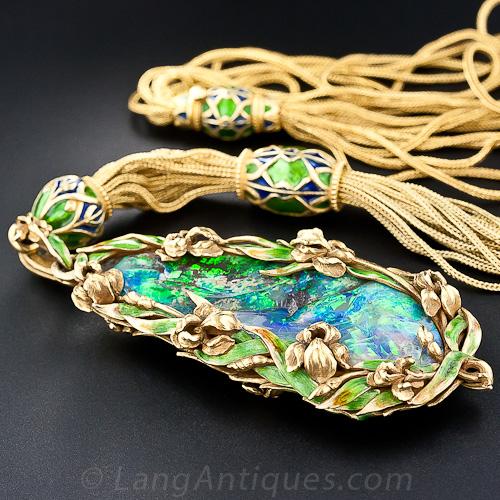 The American jewelry firm of Marcus & Co.is best known for their Art Nouveau jewelry and silver. In 1892, when Herman Marcus and his son William opened Marcus & Company at 857 Broadway in New York, Herman Marcus was already well known and respected by the New York City jewelry community. Born and raised in Germany, he had moved to the city in 1850. His knowledge of European trends and previous experience at Ellemeyer, court jewelers of Dresden, won him jobs at Ball, Black, and Co. as well as at Tiffany & Co..1 He was also a partner in the prestigious firm Starr and Marcus before going into business with his son.

In 1900, the firm exhibited beautiful orchid motif brooches, featuring plique-à-jour enameling, at Paris’s Exposition Universelle.2 The firm’s designs were of high quality, and are still among the best examples of American Art Nouveau and Arts and Crafts jewelry.3

One of the few to work in a Art Nouveau style, Marcus designed ornaments that were notable for their strong color notes in gemstones and enamels an the use of vaguely exotic motifs.4

Marcus & Co. continued to attract a high profile clientele throughout the twentieth century which included John D. Rockefeller. The firm closed for a brief time during World War II and in 1962, it merged with Black, Starr, and Frost.