Perhaps there is no famous diamond with a more disputed history than that of the Orlov. Through the passage of time so many stories and legends have attached themselves to this impressive stone that separating fact from fiction has become an impossible task. Even its origins are in question. The stone was mined in India, most probably in the Golconda region, but when and where it went is undocumented. Yet, because of its murky history and legendary travels, the Orlov is a most fascinating diamond.

If one wants to believe the most popular account, the Orlov story begins somewhere in the middle of the 18th century revolving around a French soldier who had deserted from the Indian Service. Taking up residence near a Hindu temple on the island of Srirangam, the French deserter hears stories of an idol located within the temple whose eyes are set with two large diamonds. Much to the French deserter’s chagrin, he discovers no Christians are allowed access to the innermost reaches of the shrine. Undaunted, this former soldier hatches a plan. He disguises himself as a devotee and, over a period of years and with careful planning and execution, establishes himself as a guardian of the inner shrine. His patience is finally rewarded when one stormy night he pries one of the diamonds from the idol, leaving the other intact, and escapes with it to the safety of the English army at Madras. While in Madras he sells the stone to an English sea captain for a reported £2,000. Upon the captain’s return to London, legend has it he sells it to a diamond dealer for a profitable £12,000.

Sketch of the Orloff Diamond From the Book Precious Stones by Max Bauer, Published in 1904.

In England, the story continues, the stone is purchased by a Persian merchant on his way to Russia. By 1772 the Persian merchant, now in Russia, is trying to sell the diamond to its ruler, Catherine the Great. However, the Empress of Russia rejects his sales pitch, declaring the diamond too expensive. Meanwhile, a love-struck Gregory Orlov, reputed lover of Catherine, has fallen out of the Czarina’s favor. He is desperately searching for a way to get back into her good graces. Through luck, or perhaps by design, the Persian merchant makes Orlov’s acquaintance. Seeing a lovesick man ripe for a sales pitch, the dealer convinces Orlov that any emotional walls between Catherine and Orlov will crumble if he gives his Empress this magnificent diamond. Thinking with his heart instead of his head, Orlov purchases the stone for a reported £90,000 and a £4,000 annuity. Full of expectations, an eager Orlov presents the diamond to Catherine, who is suitably impressed by the lavish gift. She decides to reward Orlov for his magnificent gesture. Unfortunately for the poor Orlov, it is not the reward of Catherine’s coveted affections, but the gift of a palace in St. Petersburg. Orlov was destined to die alone and insane a few years later.

A variation of this story has the stone set in the throne of Nadir Shah. After Nadir Shah is murdered, legend has it that the diamond is stolen by – and this is where the account agrees with the most popular version – a French soldier. (Whether the French Soldier was the murderer is also up for debate!). Another legend has the stone set in the eye of a peacock mounted over the throne of Aurung-Zeb. Then there’s an account that claims the Orlov is actually the Great Mogul Diamond even though the carat weights of the two stones are quite different – the Orlov at 189.60 carats compared to the Great Mogul at 280 carats.

Still another version has an Armenian merchant named Safras trying to purchase the stone from – you guessed it – a French soldier! When he misses his opportunity to purchase the stone directly, he steals it from the merchant who aced him out of the sale. At some point, Catherine the Great, Empress of Russia, becomes interested in the diamond, but since it would appear unseemly for a monarch to bargain with a commoner, she dispatches Orlov in the role of royal go-between with authority to purchase the stone from Safras on her behalf. This explanation seems reasonable. In this scenario, the diamond is named for Count Orlov to thank him for his service to the crown.

As an interesting aside, there is also a fascinating tall tale that involves the invasion of Russia by Napoleon of France. In 1812, as the French marched on Moscow, the crown jewels were removed to seclusion. One account places the Sceptre in the tomb of a priest housed below the Kremlin. The legend proclaims that the tomb was opened in the presence of Napoleon himself and his bodyguards. Whereupon, the invading party was reportedly surprised as the remains of the priest rose up to curse the invaders. One must suspect that this story was concocted by the French to account for Napoleon’s leaving the Sceptre – and the Orlov – in Russia.

Whatever legend one chooses to believe about the Orlov Diamond there seems to be just a single indisputable fact; the stone still resides, in its original Mughal Cut form, in the Imperial Sceptre of the Court of Russia in the treasures of the Kremlin. 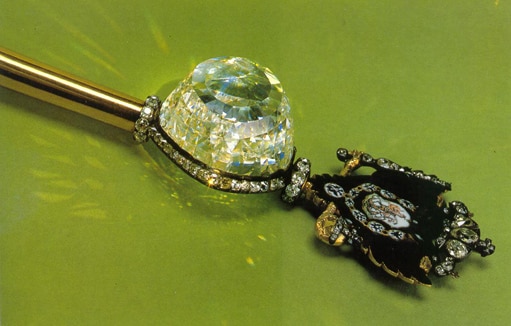 The Orlov Diamond in the Russian Imperial Sceptre
Image Courtesy of Elkan Weinberg.