It is a diamond not as well known as its contemporaries. It is somewhat of an anomaly, for through its rich French history of royal ownership it has the unusual distinction of never being used as collateral, offered as a gift, or used as part of some military, political, royal or even romantic intrigue. It was just calmly handed down from one generation to the next. The closest it ever came to any kind of peril was when it narrowly missed being confiscated from its owner during a period when having wealth was a crime in France. Perhaps it is its low profile trip through history that makes it famous. It is the Penthièvre diamond. 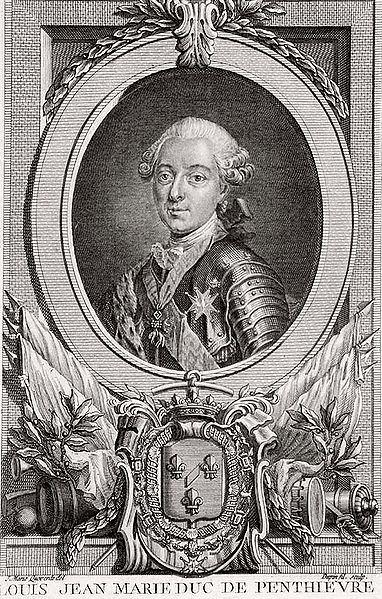 Records show this 10 carat oval-shaped yellow diamond first appears in the possession of the Duke of Penthièvre, Louis-Jean Marie de Bourbon, sometime between 1725 and 1793. Recognized as the last “legitimized” son and heir of King Louis XIV, the Duke served bravely in the French army and became Governor of Brittany. By all accounts his popularity, wealth, and generosity were legendary.

Penthièvre was blessed with seven children, sadly only one son and one daughter survived until adulthood. Seeking a marriage between the house of Orléans and his daughter, Louise-Marie Adelaïde de Bourbon, the overture was not well received by the prospective groom’s family, mainly because Louise-Marie Adelaïde was from an illegitimate branch of the house of Bourbon. All that changed when Penthièvre’s son died in 1768. Now left as his only surviving heir, Louise-Marie Adelaïde de Bourbon, as an heiress to a vast fortune, became a much more “attractive” bride to the Orléans’ family. Despite the warnings of Louis XV (future Louis XVI, King of France), Louise-Marie Adelaïde de Bourbon was married to Philippe, Duke of Chartres, at Versailles in April of 1769. To enhance the Orléans’ family financial bottom line, the bride brought with her a dowry of six million livres and an annual income of two hundred forty thousand livres, plus the prospect of much more (including the Penthièvre diamond) upon the death of her father.

The Duke of Orléans was a very vocal liberal and in fact changed his name to “Égalité” to further identify himself with those liberal views. In his personal life he was obsessed with the preservation of his wife’s wealth, having an extreme fear that she might die young, without producing an heir, thereby causing her vast wealth to revert back to her family. As it turned out all of “Égalités” worrying was for nothing as he became a victim of the violence that was the French Revolution, being executed in November of 1793. Louise-Marie Adelaïde’s grief was double for in March of 1793 her father died.

As the chaos of the French Revolution reigned over the country, the ruling convention in France, in an effort to ensure that there would never again be a claim on the temporarily defunct French monarchy by a Bourbon, declared that all princes of the Bourbon dynasty be arrested and their property seized. Louise-Marie Adelaïde was able to avoid the consequences of this decree because of a loophole, her father died 63 days before the enactment of the decree, and she was a woman, thereby exempt. The timing of her father’s death thus made her the wealthiest heiress in France up to that time.

Non-the-less, members of the house of Orléans and the house of Bourbon were eventually exiled from France and her fortune was confiscated by the revolutionaries. Those years were spent living in Spain, waiting for a time when she could go back to France and reclaim her inheritance. Returned from exile in 1814, she began successfully navigating long and complicated legal battles for the return of her rightful wealth. She died of breast cancer in 1821.

When “Égalité” was not worrying about his wife’s mortality, he and Louise-Marie Adelaïde managed to have six children together, including a son, Louis Philippe (1773-1850), who was destined, in 1830, to become King Louis Philippe I — the last king of France. In an effort to discredit and embarrass Louis Philippe, a woman named Maria Stella Petronilla stepped forward claiming she had received a letter from her father shortly after his death stating that she had been switched at birth by her real parents – the Comte and Comtesse of Joinville – for a boy. It was her contention that Joinville was a pseudonym for the Duke of Chartres (Égalité) and his wife. The secret exchange was done to ensure a male heir to the French throne. If the allegations were true, it meant that Louis Philippe was not the rightful heir to the throne of France.

Much evidence was presented by Petronilla. Her “proofs,” circulated, validated by Louis Philippe’s opposition, and were published in 1830. As for Louis Philippe, he simply laughed off her claims. Much later, in 1907, a book was published which disproved her claims of connection to the crown and put forth that she was the illegitimate daughter of Count Battaglini of Rimini and was adopted out to avoid scandal.

Meanwhile, Louis Philippe married Marie-Amelie and it was in her vast jewelry collection that the Penthièvre diamond ended up. Constant Bapst, Jeweler to the Crown did an inventory in November of 1839 of the Queen’s collection and listed a pin with a basket-set yellow brilliant. Since it was politically unwise at the time for the monarchs to be seen enjoying their wealth and flaunting their jewelry they generally steered clear of all forms of flamboyance and luxury. Marie-Amelie’s jewelry, including the Penthièvre diamond, was stored in the Tuileries along with other valuables inherited by Louis Philippe, separate from the Crown Jewels, until the end of his reign.

The next owner of the Penthièvre was Philippe, Count of Paris, grandson of Louis Philippe. He bequeathed the diamond to his son, the Duke of Orléans, and he, in turn, sold it to the Duke of Aumale, fifth son of Louis Philippe. The Duke of Aumale was also heir to the wealth of the Condé family which included the famous pink Condé diamond. Upon his death, his fortune went to L’Institut de France along with the Château de Chantilly. Both diamonds are on display in Chantilly France at the Musée Condé today.