This magnificent gem has generated enough fodder to churn out a series of pulp fiction novels. Its travel through history is intertwined with theft, murder, intrigue, a lost reputation, revolution, a World War and perhaps even a curse. It all begins in 1701 as a slave works another mind-numbing day at the Partiyala mines in India. To the slave’s amazement, he unearths a large diamond weighing an incredible 410 carats. Understandably not a company man, the slave allows temptation to overtake him and he decides to keep the stone for himself. Creatively finding a way to smuggle the diamond past his owners, he cuts open his leg and stuffs the diamond inside, securing the wound with bandages. The ruse works and the happy slave, no doubt now with visions of freedom dancing in his head, limps his way to find passage to Madras, a secondary market for Goldonda diamonds, to sell the stolen stone.

Unfortunately, the slave makes a fatal error in his choice of transportation. Securing space on a boat bound for Madras, it is during the voyage that the ship’s Captain somehow discovers what is hidden inside the slave’s bandaged leg. The unscrupulous – not to mention sadistic – Captain forcibly removes the stone from its hiding place and tosses the hapless slave overboard. Upon his ship’s arrival to Madras, the Captain sells his ill-gotten gem to the famous diamond merchant Jaychand for £1,000. With its sale, the Captain promptly decides to go on a spending spree. Whether suddenly feeling an overwhelming sense of remorse for killing the poor slave, or a realization that he was swindled by Jaychand, the Captain squanders his ill-gotten-gain and hangs himself.

Meanwhile, Jaychand is having his own troubles, discovering it’s not that easy to move a diamond once word gets around that it’s stolen property. Eventually, accounts of Jaychand’s attempts to sell the stone come to the Governor of Madras, Thomas Pitt (a relation to the more famous William Pitt, the eventual namesake for the city of Pittsburgh, Pennsylvania). Pitt invites the renowned diamond merchant for a visit. Possibly because he knew the gem was stolen – and of Jaychand’s desire to unload it – Pitt drives a very hard bargain. Wearing down Jaychand over a long period of months, the Governor finally succeeds in purchasing the diamond from him. The experience very well could have left the beleaguered Jaychand entertaining the same thoughts of suicide as the deceased captain for Thomas Pitt had successfully negotiated down the opening price – reported at £85,000 – to a final sale price of only £20,000! Perhaps Jaychand did however have the last laugh, for rumors began swirling about the unethical means Pitt used to purchase the diamond. After causing severe damage to his reputation, Pitt tries to discount the rumors, but almost no one believes his account of the purchase. 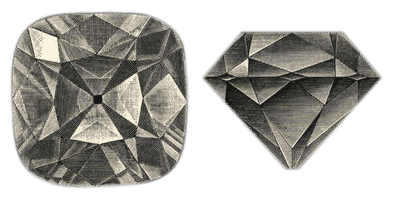 With his reputation in ruins, Pitt sends the stone – now named after him – to be cut for a price of £25,000, the deal including the return of all the pieces cleaved from the stone and the associated “diamond dust.” After two long years at the cutters, the result creates a brilliant diamond weighing 140.5 carats. Pitt sells some of the smaller stones to Peter the Great of Russia, but he keeps the Pitt Diamond, eventually selling it to the Duke of Orleans, Regent of France, during the time of Louis XV, for £135,000. Although the sale allows Thomas Pitt to restore his family to prosperity, he never succeeds in clearing his name. After Pitt’s death, his son takes up the cause, vainly continuing efforts to restore his father’s reputation.
Now in the hands of the French, the diamond is renamed the Regent and is appraised by them at £480,000. In 1792, the Regent Diamond – now enjoying the status as the crown’s most valuable stone – is placed in the Guarde Meuble, to protect it during the imprisonment of Louis XVI and Marie Antionette. However, during the chaos of the French Revolution the diamond is stolen, but the thieves do not hold the stone for long as it is discovered almost immediately in the garett of a house in the Halles district of Paris. The ministry of Finance secures it and puts the stone’s value to work, using it to collateralize loans.

During the reign of Napoleon, the Regent Diamond is set in his ceremonial sword which he carried to his coronation as Emperor. When exiled, Napoleon’s wife pried the stone from its mounting and attempted to take it to Austria. Appalled at her actions, it is reported that her father makes her return it to Charles X of France, who in turn sets the stone into his crown. Later, when Napoleon III comes to power, he loans the Regent to Empress Eugenie. Not allowed to wear royal jewels, Eugenie decides to wear it in her hair in a Greek-style diadem.

Years later, after the downfall of Napoleon III, the newly proclaimed French Republic decides, in 1887, to auction most of the French crown jewels. However Eugenie’s diadem, still containing the Regent Diamond, is not placed on the block. Instead, it is displayed in the Apollo Gallery in the Louvre. Its stay at the Louvre is interrupted by the outbreak of World War II. In order to protect it from certain looting by the Germans during their occupation of France, the diamond was successfully hidden in a stone-covered box in Chambord. After the war, the Pitt-Regent was returned to the Louvre where it remains on display to this day.