Imagine a diamond where the reader is not faced with the challenge of trying to separate fact from fiction when researching its history. Such is the case of the Shah Diamond. A rarity in the gem world, this famed Golconda diamond, once part of the Persian jewel collection, has no legends of any kind attached to it. Instead, one can be secure in the knowledge that when reading about the Shah Diamond, its story is entirely based on fact. 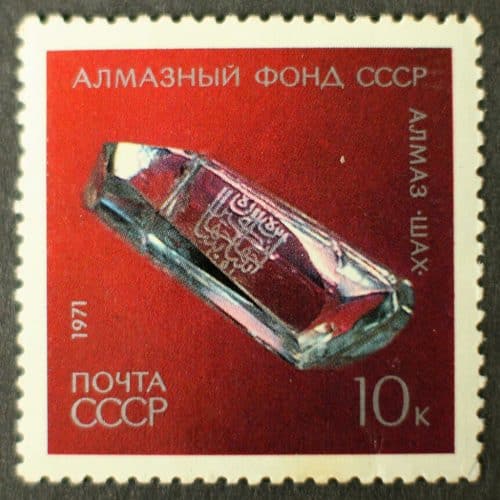 A Stamp (From the Former Soviet Union) Depicting the Shah Diamond.

Even without the help of legends the Shah Diamond’s story is still an interesting one. What it lacks in mystery and romanticism is made up for when one discovers how researchers are so sure of its history. They just look at the stone as centuries ago, someone had the novel idea of recording the Shah’s history by carving the facts right onto the diamond itself! Since nothing will cut a diamond, but a diamond, some sort of diamond carving tool must have been created in order to engrave the history onto this diamond. Robert Streeter describes the Shah by saying “It is a diamond shaped like a coffin, a coffin in which reposes an undying fire.”1 Along with the inscriptions, the upper edge of the stone is grooved, presumably to provide a notch for a string so it could be worn around the neck.

The first inscription is the name of the ruler of Ahmadnagar. The diamond was most certainly a gift of Golconda’s Qutb Shahi to Burhan Nizam Shah as no diamond mines existed in the kingdom of Ahmadnagar. Burhan Nizam Shah was ruler of the Province of Achmed-nager, India, about 1591 this would indicate that the Shah diamond had to have been found prior to 1591. He held the stone until he lost his kingdom and his gems to Akbar in 1591.

The second inscription tells us that the stone was held by the Mogul Emperor Shah Jahan, grandson of Akbar, in 1641. Known by his contemporaries as the “Eternal Mogul,” Jahan’s more famously known as the builder of the Taj Mahal. In 1660 the stone passed to Aurangzeb who showed it to Tavernier sometime around 1665.

The final inscription makes it certain that the Shah diamond, along with the Koh-i-Noor, was looted by Nadir Shah and taken to Persia when his armies ransacked Delhi in 1739. This accounts for the third inscription recording the ownership by Kadjar Fath Ali Shah, Shah of Persia in 1824.

The Shah diamond’s final destination came about because of the assassination of a Russian diplomat. Alexander Griboyedov enjoyed a powerful influence among the rulers of Russia. He played a major role in the defeat of Shah Abbas Mizra, and he had successfully negotiated the treaty of Turkmanchai with Persia, gaining valuable Russian territory, after their 1827 dispute. He was appointed as Minister of Persia. Either in ignorance or with a lack of awareness of the extent of his unpopularity in Persia, he returned to Tehran. Shortly thereafter he provided aid and shelter to two former Armenian girls who had escaped from the Shah’s harem. Griboyedov was killed by an angry mob who stormed the Russian legation on January 30, 1829. The 88.7 carat yellowish Shah Diamond was then sent to Russia as an apology and as a gesture of appeasement to Czar Nicholas I. The gesture was successful and further warfare was averted.

The Shah was made a part of the Russian crown jewels until the Bolshevik revolution of 1917 when it disappeared for a short time. Rediscovered in 1922, the stone was placed on display at the Russian Diamond Fund in the Kremlin, Moscow as one of the “Seven Historical Gems,” where it remains to this day. It was featured on a Soviet postage stamp in 1971.